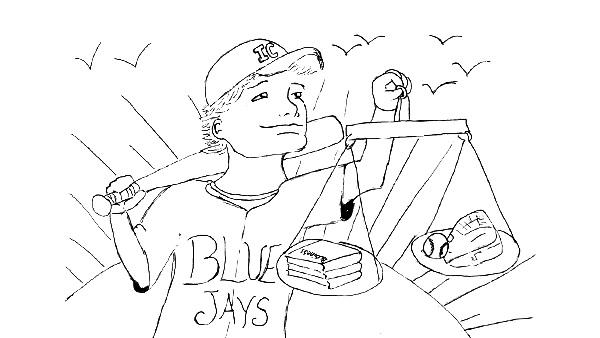 Ithaca College is not a place that many would expect to frequently pump out professional athletes — and it doesn’t. This is why it is unusual to hear the story of Tim Locastro, a senior who was drafted in June from the Bombers baseball team to play for the Toronto Blue Jays organization in the 2013 Minor League Baseball season. Besides Locastro, only five other Bomber baseball players have been drafted from Ithaca College in the past 10 years.

Locastro was drafted to the pros with a semester left to complete his undergraduate degree in business administration. He was essentially faced with three options — go full-time professional without graduating, turn down the draft to finish up his last semester of school, or try to complete his final semester while going professional. Locastro chose to finish school while starting a professional career.

While it was a tough decision to forgo his senior year of collegiate baseball, Locastro now has the benefits of professionally playing a sport he loves and continuing his education on the Blue Jays’ dime. Not only does this save him money, but it shows that his employer is also invested in his education.

There is a chance that he could have received a higher salary had he waited to be drafted in the top 10 rounds after finishing his senior year with the Bombers. However, this would have been a gamble, because there is no guarantee Locastro would have been drafted again.

Locastro made the right decision to take advantage of this professional opportunity while finishing his degree. Having an education provides him with other career opportunities if he retires from the pros, and as a student athlete he serves as a role model to his former Bomber teammates by completing his education while pursuing a career.