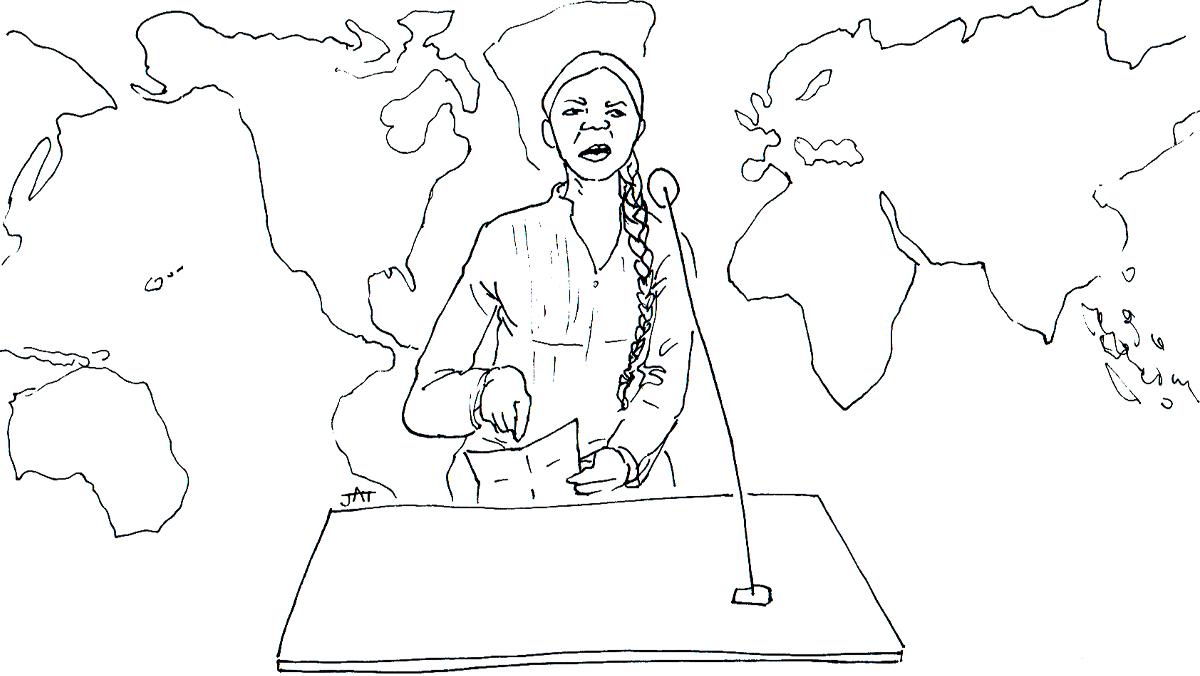 On Sept. 20, masses of young people all across the world gathered to participate in the Global Climate Strike. Students, activists and community members hit the streets in over 160 countries to express their concerns about the quickly developing climate crisis and demand that lawmakers take action. Strike organizers estimated a total turnout of four million people, making it one of the biggest climate protests in history.

The worldwide climate strike was helmed by 16-year–old Greta Thunberg, a Swedish activist whose demonstrations and calls for environmental justice have helped spark a global movement. Now, young people across the globe are following in her footsteps to demand change.

Ithaca College is one of the many academic institutions across the globe that had students participate Sept. 20. That afternoon, the college’s Eco-Reps led students down South Hill to a rally on The Commons, where they were joined by local high schoolers and community members.

Young people’s efforts to achieve environmental justice and hold government officials accountable for their inaction are not only admirable but absolutely necessary. Student activism has always played a vital role in nationwide social justice movements and the foundation of systematic change. In the 1960s, widespread student involvement in the civil rights movement drew attention to the harsh reality of racial discrimination and played a significant role in policy reform. In 2018, after a gunman killed 17 people at Marjory Stoneman Douglas High School, “March for Our Lives” inspired student-led movements across the country that advocated for an end to school shootings through gun violence prevention policies. Here at the college, student protests of the college’s administration over race issues during the 2015–16 academic year led to the resignation of former college president Tom Rochon.

The United States is governed by a presidential administration that denies the existence of climate change and regularly rolls back environmental regulations. The president often refers to climate change as a “hoax” and supports the increased use of fossil fuels. In 2017, the president announced the U.S. government would no longer abide by the Paris Agreement.

The widespread influence of the climate crisis-denying administration sets an extremely dangerous precedent for the future of our planet. The divisive nature of politics in our country only furthers the need for concrete action against climate change. We cannot let the federal government undermine efforts towards environmental equity. It is more important now than ever that we genuinely work among our own communities to expand dialogue around climate justice issues and advocate the urgency of the issue.

Youth participation in protests and rallies, like the Global Climate Strike, is a great way to start. Actions like these demonstrate the global reach of the climate crisis and provide a platform for students and young people to share their stories and goals. They also give platforms to people directly affected by climate change who don’t always have control over dominant narratives, such as indigenous people, people from low socioeconomic backgrounds and members of the LGBTQ community.

As President Donald Trump’s administration continues to roll back environmental protection policies and deny the reality of climate change, it is absolutely necessary that young people continue to show up and advocate for the future of our planet. As proven by Thurnburg’s influence on the dialogue around climate justice, young people do have the power to make a change — and it is crucial we continue to do so.