Editorial: Students should plan ahead during voting season 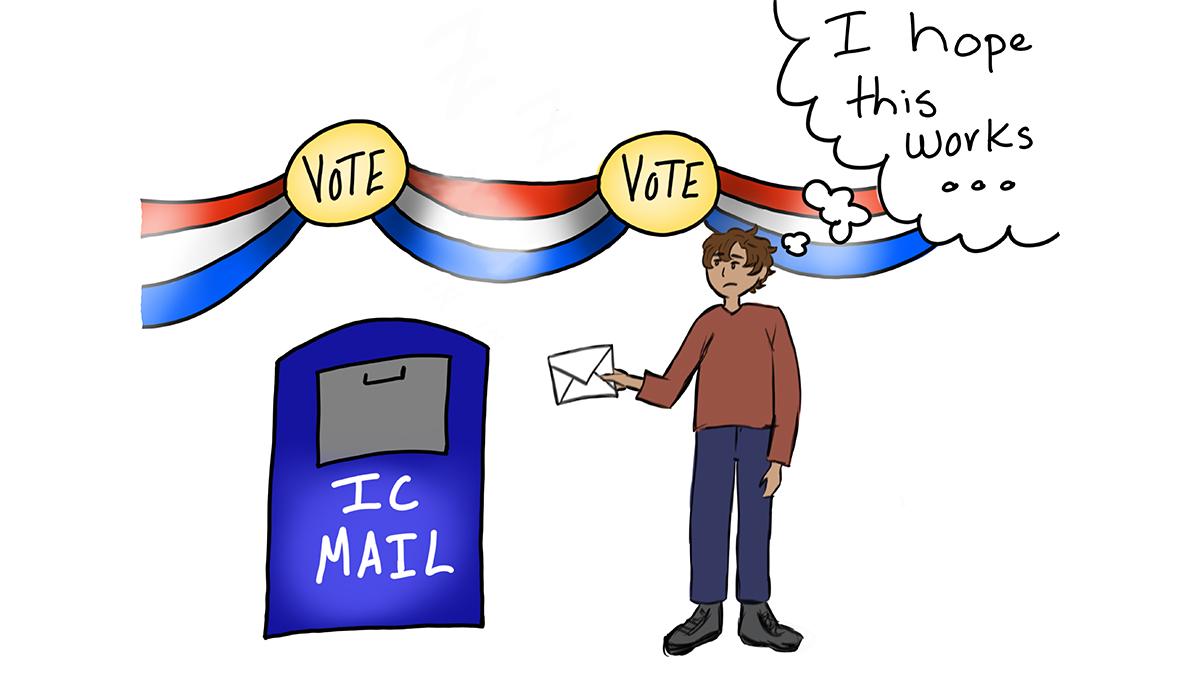 Madolyn Donaghy-Robinson/The Ithacan
With the recent rise in young adult voting, Ithaca College students should take a proactive approach to making sure their vote gets counted.
By The Ithacan
Published: October 19, 2022

Since 2020, a large voter turnout has been aided by the increase in popularity of mail-in ballots. According to the U.S. Census Bureau, in 2018, 35.6% of all U.S. 18–29 year olds voted in the midterm election, which is a 79% increase since 2014. With this rise in young adult voting, Ithaca College students should take a proactive approach to making sure their vote gets counted.

Some students expressed concerns with Ithaca’s mail services, with staffing issues and delayed delivery times being among the most common issues. Sophomore Charles Vargo said that last time he voted by mail, his ballot was sent to his home in New Jersey and then had to be sent to campus. He then waited multiple days before receiving his ballot after it arrived at the college. Students often complain about slow delivery times, as letters and packages can be held in the mail center anywhere between a period of days to weeks during busier times.

The anxiety of casting a vote mixed with the ambiguity of what happens after it is out of the voter’s hands creates a genuine dilemma for first-time and experienced voters alike. In order to get their ballots in on time, students should be mindful of shipping times and local ballot processing procedures. Although outgoing mail is treated as express packages, it is important to account for any unexpected delays.

Jeff Golden, senior director of Auxiliary Services, said he suggests that becoming familiar with local voting jurisdiction requirements is the best way to ensure a vote is counted. He also said that it is best to drop off ballots to either the mail center or the USPS mailbox in U-Lot by 3 p.m. in order for it to be picked up the same day. Alternatively, students can send off ballots in any USPS designated mailbox or post office.

For students who worry they can’t vote because they do not have a physical ballot, it is possible to receive one via mail, email or in person, depending on state jurisdiction. To minimize the delivery time of ballots sent by mail, students can request a ballot sent by email and print their ballots out at one of the many printing locations on campus and then send it off.

While voting is important, so is casting an informed ballot. Students can access voting resources on and off campus. The Gannett Center on campus has a political communication guide, which provides information on how to vote on local, state and federal levels; tips for learning about relevant issues on the ballot; and how to contact officials. The Office of Student Affairs and Campus Life also offers political advocacy groups on campus like the Student Governance Council, IC Democrats and IC Republicans. The Tompkins County Public Library offers resources to all voters in the region including organizations and government sites that provide voting accessibility and assistance.

Although each ballot varies by state, most ballots generally include candidates running for open seats or reelection in Congress, city council, school board or other bureaucratic positions as well as proposed local policies. Depending on proximity and location, the USPS can take anywhere from 1 to 3 business days to mail. Many states will process and count ballots that were postmarked on or before Election Day, even if they were received after elections have closed.

In some cases, those who are not registered to vote are still eligible to vote if the request was received by Election Day. Almost every state offers online voter registration, as well as online mail-in ballot requests. In any case, it is best to check individual state law eligibility and deadlines.

As a voter, how you participate in democracy is your choice and responsibility. By keeping up with not only current and local politics, but the laws and protocols of your local jurisdiction, anyone can feel assured in casting a meaningful vote in this upcoming election.