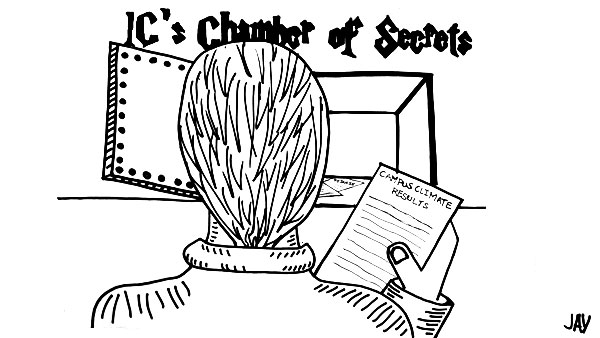 Ithaca College has not participated in The Chronicle of Higher Education’s Great Colleges survey in three years. President Tom Rochon said at an All College Meeting in Spring 2011 that the survey did not allow hourly employees to participate, making the results less comprehensive than the administration would like. The 2013–14 version of the survey now includes hourly employees, but the college has shown no interest in participating again.

This is not the first time the college has steered away from releasing critical information. It has repeatedly withheld admissions data that detail school-by-school recruitment targets, as well as targets for international and ALANA students. This information is critical for committees and groups on campus trying to use college-specific data to propel their initiatives.

Similarly, the results of the Campus Acceptance, Inclusion and Fairness survey, which was conducted in 2012 and aimed to measure inclusivity on campus, were set to release in Spring 2013 but are still being withheld. Some faculty members who have seen the survey have suggested that there were flaws in its format and analysis, and that the negative feedback it contained may be discouraging the college from releasing the results. This information should be released to students and faculty, particularly so those who took the survey can see the results that reflect students’ perceptions of the campus atmosphere.

By denying both faculty and students the opportunity to see feedback, the administration has hindered the visibility of community issues. Making available the results of the campus climate survey would be a first step toward transparency.