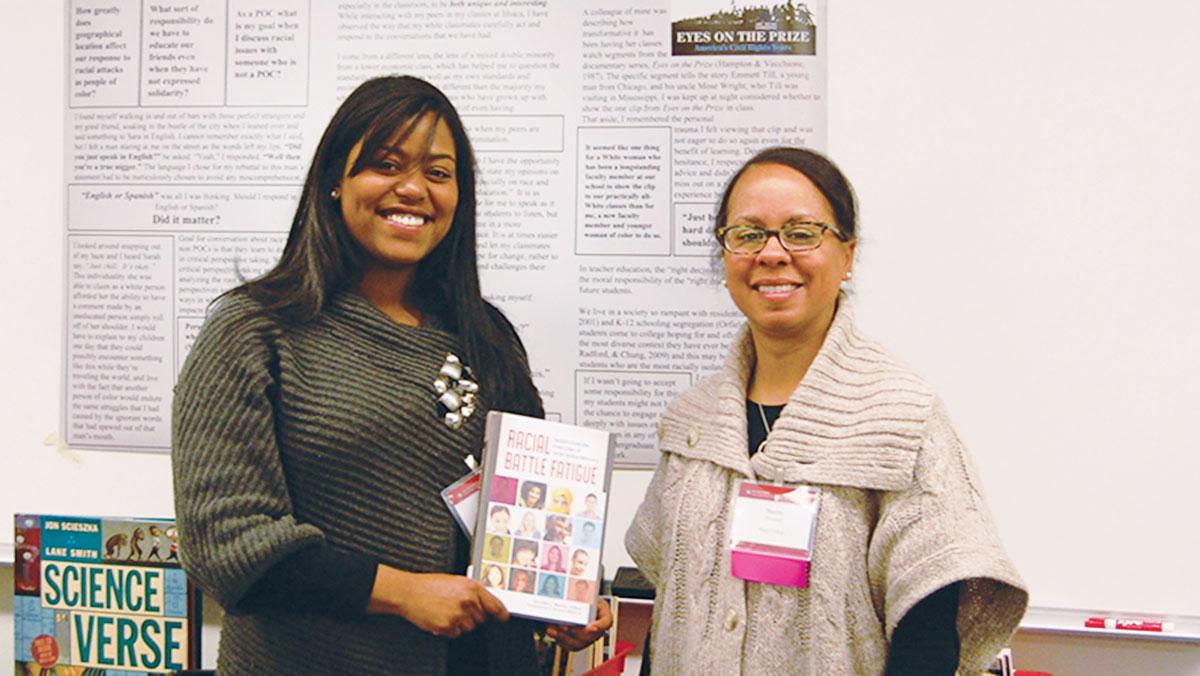 This is an excerpt from a chapter co-authored by Beatriz Montilla and Sherry Deckman in “Racial Battle Fatigue: Insights from the Front Lines of Social Justice Advocacy.”

It seemed an innocuous enough task: have students respond to various quotes and ideas from Affirming Diversity (Nieto, 2004) and Why are All the Black Kids Sitting Together in the Cafeteria? (Tatum, 1997). The context was our Social and Cultural Foundations of Education class in which we were the professor (Dr. Sherry, as my students refer to me) and a student (Beatriz). The course, which aimed to provide preparation for critically reflective decision-making and for working effectively with diverse students and communities, was required for all undergraduates in our Ithaca College teacher education programs. Aligning very much with national trends (Feistritzer, 2011), all but 3 of 21 students and the instructor identified as White—Dr. Sherry identifies as biracial (Black/White), Beatriz as Latina/Black …

For this activity, students circulated around the room engaging in a “silent conversation,” writing thoughts on large sheets of chart paper. I (Dr. Sherry) had supplied several prompts to get them started that included questions or quotes from the texts meant to elicit deeper thinking. One poster included this quote: “For those readers who are in the dominant racial category, it may sometimes be difficult to take in what is being said by and about those who are targeted by racism” (Tatum, 1997, p. 27).

I had chosen this quote deliberately to provoke reflection from some of the students who had asked why we were spending so much time in the course focused on issues of racial inequality in education. A number of students in this class section as well as the others I was teaching were incredulous that acts of overt discrimination were still occurring in the United States, at least in the northeast. They found evidence of racial injustice difficult to assimilate into their perception of the world, wanting to believe that they were fair, nondiscriminatory people who had grown up in fair, nondiscriminatory communities in a fair, nondiscriminatory country. To demonstrate otherwise might implicate them and their loved ones as the beneficiaries of unearned privileges and as perpetrators of injustices.

Currently in the field of higher education, “diversity” is regularly discussed as an unproblematic ideal. However, what is often left unexplored is exactly what diversity means and how it is experienced by the faculty and students of color who are viewed as the “diversifiers” (Kramer, 2008) on predominantly White campuses. In the service of the institution and greater good we may be daily subjected to microinequalities and microaggressions (Sue, 2008), such as being told explicitly, or through furtive eye rolls, that our views are dismissible, as Beatriz reveals when she writes [about some of her classmates’ responses to her views in whole class discussion], “I feel like my point is constantly being demeaned in subtle ways.” Deckman / Montilla 4.

Throughout this chapter, we uniquely intertwine our voices, illuminating how each of us felt the difficulties of asking other members of the class to interrogate their privilege. Our point here is not to vilify the White students. Rather, we hope to provide a counterstory that challenges notions of campus racial diversity as unproblematic and demonstrates how discussions about race in higher education are complicated and especially so in classroom settings designed to focus on social inequality that are overwhelmingly White and privileged.