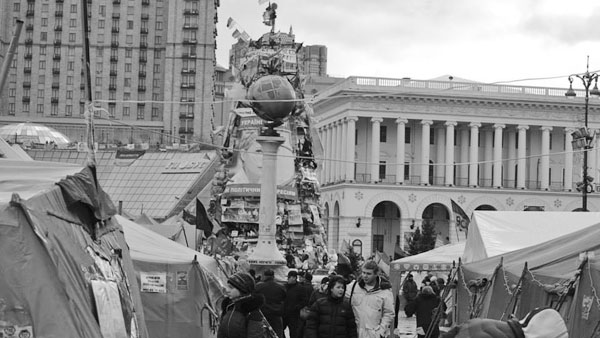 In the past several weeks, the crisis in Ukraine has received international attention because of violent protests and threats of Russian invasion. It is not easy being in the United States while my family, living very close to the center of Kiev, are caught up in this conflict.

My father was employed in Kiev, Ukraine, in 1995 when I was 3 years old. I saw the country progress from a time when people had to wait in line to obtain milk from a truck to now, when five-star hotels and exquisite restaurants are scattered across the city. My parents and younger brother still live in Kiev. I came to the U.S. for college.

Ever since their release from the Soviet Union in 1991, the people of Ukraine have strived to free themselves from Soviet ways and Russia’s political grip. In 1994, Ukraine and Russia signed the Budapest Memorandum on Security Assurances in order to assure no country that signed would use force or threats against Ukraine.

However, Ukraine has a huge population with contrasting views. The west side of Ukraine wants stronger ties to the European Union, while the east side wants to be politically aligned with Russia. When Ukraine’s former president, Viktor Yanukovych, failed to sign an agreement to integrate Ukraine with the EU in November 2013, many people, especially younger generations and western citizens, had enough.

What began as peaceful protests soon erupted into violence after Yanukovych ordered police to end the demonstrations Nov. 30, 2013. This sparked more anger among the people, and what began as a student protest in the capital soon became a nation-wide movement. After Yanukovych passed the dictatorial set of laws Jan. 17, which included arrests for peaceful protesting and prohibition of Internet access, among other legislation, violence ensued between protesters and policemen.

During this time of violence was when I feared most for the lives of my family and friends. Schools closed down and many people could not get to work because the rapid transit stations downtown had closed. On Feb. 20, snipers were hired by an unknown party to shoot protesters in the head and neck. What ensued was a murder of more than 100 people.

Along with the protests, it has become clear that Russian President Vladimir Putin plans to invade Ukraine. There are multiple reasons for Putin’s interest, including a desire to keep United States military bases out of the region. The Russian military has mobilized greatly since Feb. 26, with plans to reclaim Ukraine’s Crimean region.

My parents have packed their valuables in case they need to evacuate. They are ready to meet with other family members in Austria. Because I am so far away, I can’t even imagine what it is like for the locals who have nowhere else to go and only want a bright future. I plan to continue studying in the United States next year, as I will be going to graduate school for music therapy. Hopefully, my family will not be evacuated, and I will be able to meet them in Ukraine when I return for the summer.

Right now, the worst is not knowing what Putin will decide to do. Will Obama’s sanctions be enough? While even Russian people are protesting against Putin, it is the government of Russia that is power-hungry.