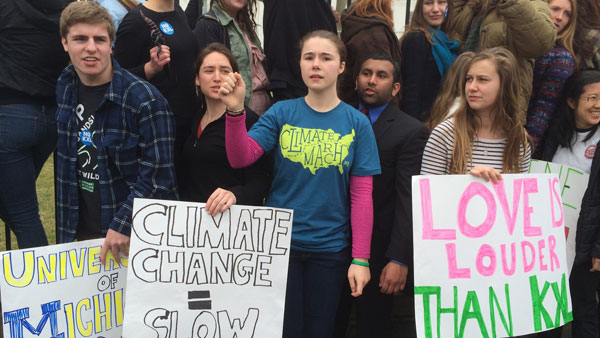 Our group of protesters did not budge. Instead, we chanted: “We are fighting global warming, this our third and final warning!”

On March 2, I attended the XL Dissent rally in Washington, D.C., to protest the proposed Keystone XL pipeline, which would be capable of transporting 800,000 barrels of oil per day. The pipeline requires presidential approval.

More than 1,000 people attended the event, and I was one of 372 people arrested for failing to obey the police. Most of us were students representing more than 50 different colleges.

We defied the police by zip-tying ourselves to the White House fence. We also put down a black tarp symbolizing an oil spill, and many protesters, including myself, laid down and played dead. Our performance symbolized the dangers of oil spills to human health and the environment.

We began our march around 10:30 a.m. When we arrived at the White House, we proceeded in mass civil disobedience. After about 20 minutes of chanting, singing and not moving, the U.S. Park Police put up a temporary fence around us. When we did not heed their three warnings, an officer announced we were all under arrest. It would take them hours to bring all 372 of us into custody. The first person was led away at 1:30 p.m. I was not arrested until 2:45 p.m., and I was only number 71.

XL Dissent, which Democracy Now! and other sources called the largest youth civil disobedience event in a generation, is one of many recent protests opposing the pipeline. Even though this event was primarily composed of youth, people of all ages are opposed to the pipeline. At 18, I was the youngest of about 60 people to risk arrest on Aug. 12, 2013, at a sit-in at the State Department. There were parents, grandparents and Vietnam veterans sitting beside me that day.

I am convinced a majority of Americans see the pipeline for the madness it is. I traveled to Washington to remind Obama that our government serves its people. If he approves the pipeline, he will defy the wishes of American citizens. We will not take that lightly.

As it began to rain, a police officer finally approached me. He fastened the plastic cuffs on my wrists — tight enough that I would have bruises later — and led me away. As those still waiting to be arrested shouted “We love you!” after me, I thought to myself: I don’t know how to make my stance on this any clearer to my government. Being arrested was one of the proudest moments of my life because I was taking a stand for my future.

I was disappointed that I was the only student representing Ithaca College. Attending these events takes time, but this is our future we’re dealing with. Do not be afraid to speak up. It is your constitutional and human right.