With estimates of the prevalence of doping among competitors ranging up to 90 percent in some sports, it’s no wonder athletes like Landis claim they had to dope. 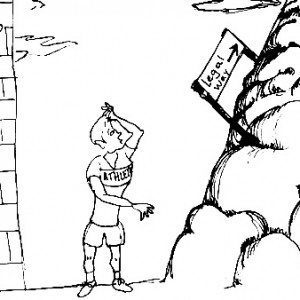 Doping distorts the playing field and the nature of the sport itself. As performance-enhancing drugs proliferate, athletes need higher and higher levels to maintain a competitive edge. Some athletes may even turn to undetectable genetic doping. With genetically enhanced athletes, sports would erode into commercialized entertainment, similar to professional wrestling, where society will only care about performance outcomes.
Deterrence methods are important to preserving sports as a contest of human excellence and to address the morality of doping. Currently, anti-doping policy relies upon a detection-based deterrence approach in which athletes who are caught doping are punished, which may deter other athletes. However, the contest between doping and detection is an arms race between new detection methods and increasingly sophisticated methods to avoid detection.

From a psychological perspective, the rejection of Bonds and Clemens as Hall of Fame candidates suggests a shift in attitude toward doping. Initial work applying Bandura’s social cognitive theory to athletes considering doping suggests that mechanisms of moral disengagement may play an important role in facilitating doping by allowing athletes to rationalize their PED use. If we better understand these mechanisms, we may be able to create deterrence methods that can help put an end to doping in sports.

Recent studies examining English bodybuilders found athletes using PEDs reported using several moral disengagement mechanisms as a way of justifying their doping. These methods include: displacement of responsibility, when athletes claim social pressure to use PED in specific training environments as their reason for doping; diffusion of responsibility, when athletes claim their use of PEDs is acceptable because other athletes do it; advantageous comparison, when athletes make PED use appear inconsequential by comparing it to more harmful activities; distortion of consequences, when athletes avoid or cognitively minimize the harm caused by PED use; moral justification, when athletes justify PED because they claim they know how to use the drugs safely and that knowledge can be passed on to others; and euphemistic labeling, which is the use of sanitizing terms such as juice or gear when referring to PED to make substances sound less harmful.

These mechanisms of moral disengagement are found in statements of athletes known to have used PEDs. For example, Landis’ statement that Armstrong’s longtime manager Johan Bruyneel introduced him to doping and that Armstrong taught him how to dope are examples of displacement of responsibility. Similarly, when Tyler Hamilton explained that he felt he had to dope because almost all cyclists in the professional peloton were doping, he was evidencing diffusion of responsibility. Armstrong and his teammates are also reported to have referred to erythropoietin, a blood booster they used extensively, as “Edgar Allan Poe” or “butter,” and the period during which doping products would produce a positive test as “glow time.” These are all clear examples of euphemistic labeling.

Is there hope for an end to doping in professional sports? A better understanding of the process of moral disengagement might lead to interventions that could assist in further reducing PED use. Of course, psychology will not produce a miracle cure, but a knowledgeably designed program of deterrence and persuasion is vital to curbing PED abuse.

Miranda Kaye is an assistant professor of exercise and sport sciences. Email her at mkaye@ithaca.edu.