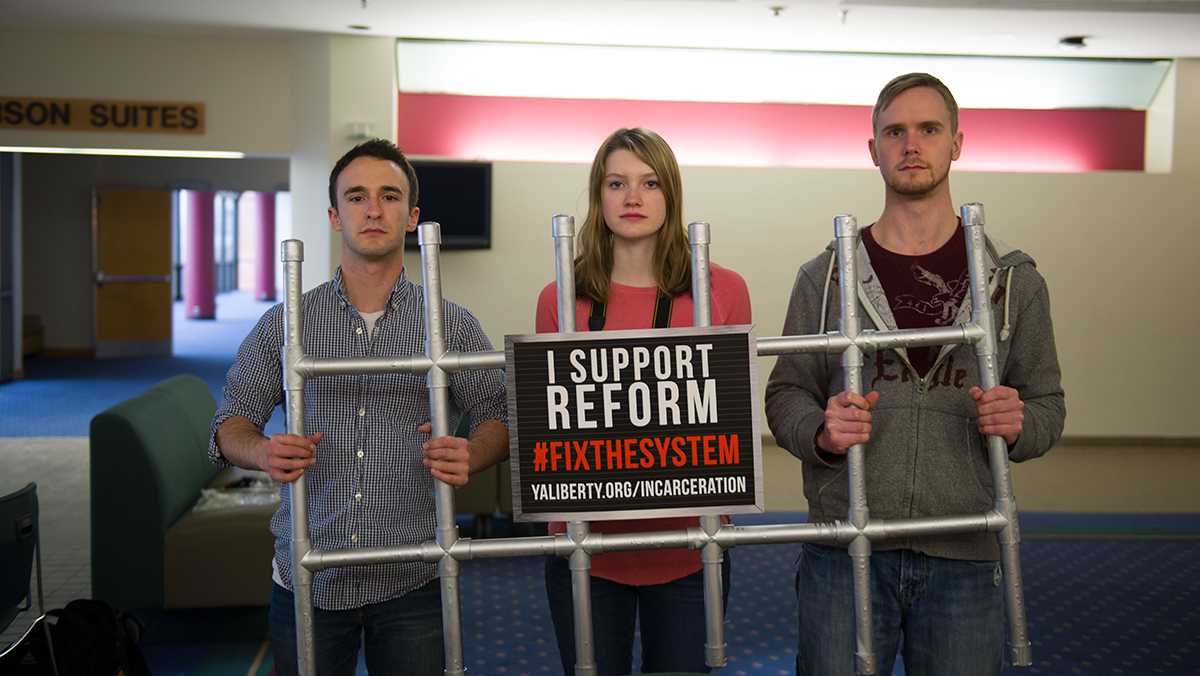 IC Young Americans for Liberty spent the day Feb. 16 collecting donations to send clean water to Flint, Michigan, which has been rocked by a drinking–water crisis and where President Barack Obama declared a federal state of emergency.

The political organization’s leaders sought to demonstrate how this is an example of criminal injustice by setting up a mock jail alongside their donation drive and offering facts and figures about the American criminal–justice system.

Kayla Dwyer: You’re doing more than just donating water to be nice. Can you tell me what you’re trying to communicate with this and how you’re connecting it to criminal–justice reform?

Sean Themea: The crux of what we would tell students when they came by is we’re raising awareness about how our criminal–justice system is broken in this country. … Why are we sending people to jail for 55 years for selling marijuana, nonviolent drug offenders, when the government officials in Flint, Michigan, essentially, through negligence, poisoned their city’s water supply and have no criminal charges being brought against them when they’re out hurting people? We want to raise awareness … of how people in the government can do wrong and not face any repercussions under our system. We see that with Flint, but if I were to be as negligent as them and harm people as they’re harming people, I’d be a criminal. I’d be in jail.

KD: How does this message align with Young Americans for Liberty? What does this organization say about the best approach to criminal–justice reform?

ST: We’re all about limited government and trying to give the most individual liberty and freedom to people, as opposed to the government trying to tell them how to run their life or punish them when they’re not hurting anyone. In terms of the charity portion of what we’re doing, we want to show that we as individuals can help people without coercion. Giving to charity is a voluntary act. No one’s having their wealth redistributed through taxes. No one’s forcing you to give — you are giving voluntarily, so it’s compassion without coercion. Also, just to highlight the difference between individuals doing good and actually getting clean water to people, versus the government, which obviously can’t handle providing clean water to its people — to raise to light that the government is not perfect and can harm people. I suppose that part of limited government and maximizing individual liberty would be to reform our criminal–justice system so we’re focusing on crimes that actually hurt people. … Why are we focusing so much on drug offenses that aren’t hurting people? You own your own body. The government doesn’t own your own body. So if you choose to use drugs, the government shouldn’t have a say in what you put into your own body or to punish you for a crime that’s only concerning yourself.

KD: How will you go about physically donating the water?

ST: As opposed to just giving the money to a charity fund, we want to actually purchase the water ourselves and then send it through a reputable group that will get the water to the people of Flint. We’re just trying to decide which we think is the best channel to send that through.

KD: What kind of reception have you received from students walking around while you were tabling?

ST: I think we had very positive reception from students — the students who did stop to take a look. … Students who didn’t know as much about what was going on at Flint, we were able to share what we knew about Flint with them and help educate them. That’s really a core mission of Young Americans for Liberty: … to educate students and then mobilize them to action, to fight for liberty issues on college campuses and beyond, once you get out. So it was a privilege and, I think, a valuable experience to get that knowledge out and really get students excited about joining the group, putting on similar activities like this and really contributing to the cause.

KD: Do you have any other ideas in mind for activities similar to this one?

ST: In the past, we did the 9/11 remembrance project, and we put up the Free Speech wall during the campuswide protests as well, to affirm the right to the First Amendment for the campus. We ran a charity drive for Loaves and Fishes back in December, and in the future, we definitely have plans in store. We’d like to focus on raising awareness on the fiscal crisis that our nation’s in. I think we also can do more this semester to talk about free speech on campus, so potentially bringing in a speaker for that.

KD: What had you hoped students would take away from setting up the mock jail and collecting donations?

ST: I think I wanted students to have awareness raised … to see the dichotomy between government protection and people being punished when one crime is so much worse than the other. And just to raise awareness on how the government is ineffective and how we can make a difference — we don’t have to rely on the government to help us, and they oftentimes hurt us. … Especially when you’re looking at Flint, too, it’s another example of how people of color and poor people are the most at risk through government inefficiency — just that the government doesn’t protect citizens with the most at risk — and nothing’s been done about it still, or nobody’s faced any consequences, rather.