Survey results have shown a number of employees are dissatisfied with Ithaca College as an employer. The college participated in the Chronicle of Higher Education’s “Great Colleges to Work For” survey, but the college was not listed on the final list of great colleges to work for. President Tom Rochon discussed the survey results at the All-College Meeting last Thursday, highlighting that the college needs to make improvements. The college will no longer be participating in the survey, but it should. 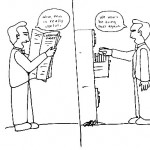 The Chronicle results, as well as results from a survey compiled by The Ithacan, indicate that while college employees were pleased with a number of aspects of their work life, they showed a lack of confidence in senior leadership and dissatisfaction with performance evaluations. As the college moves forward with the IC20/20 vision, it’s important to discuss areas to improve on.

When the survey was taken last spring, the college was trying to manage itself at the tail-end of an economic recession. Rochon had yet to present IC20/20, and faculty had expressed concern with the performance of then-provost Kathleen Rountree. Since then, the economy is doing better, Rochon has presented a new vision and a new provost has been chosen. The college is moving forward.

Rochon suggested at the all-college meeting that the college was not listed on the “Great Colleges to Work For” because the college included hourly workers in its survey while other institutions that were listed as great colleges to work for did not, thus skewing the results and using this as a reason to not participate in the survey in the future. Once The Ithacan established that the hourly workers input was not a factor in the Chronicle’s ranking, Rochon admitted he was misinformed and made a mistake.

The information from the Chronicle survey was valuable. The college was able to mark areas for improvement. But in the future, that information will no longer be available. The college is encouraged to continue participating in the survey to receive feedback from faculty and staff, as well as to compare strengths and weaknesses with other colleges. Eliminating the college from participating in external surveys is the wrong move. Faculty and staff may feel more comfortable commenting on employee satisfaction to outside sources rather than inside sources for fear of job reprisals.

Showing that the college participates in surveys such as the Chronicle’s, is a way to attract prospective employees and see how we stack up against other institutions. This could give the college the chance to put itself on the map as an employer. Also, by participating in the Chronicle’s survey, the college can see if other colleges share in the same problems and what they do to improve.

The college needs to continue to address areas where employees are dissatisfied. The new vision is IC20/20, but in its early stages Rochon and the administration need to make sure that it’s effective and employees are satisfied. Rochon and Marisa Kelly, the new provost, need to receive feedback from faculty about how evaluations can be improved and how faculty and staff can meet their goals.
The results from the Chronicle survey are beneficial. By seeing where it can improve, the college will move forward and fix its problems. Participating in external surveys give employees the voice needed to initiate change.