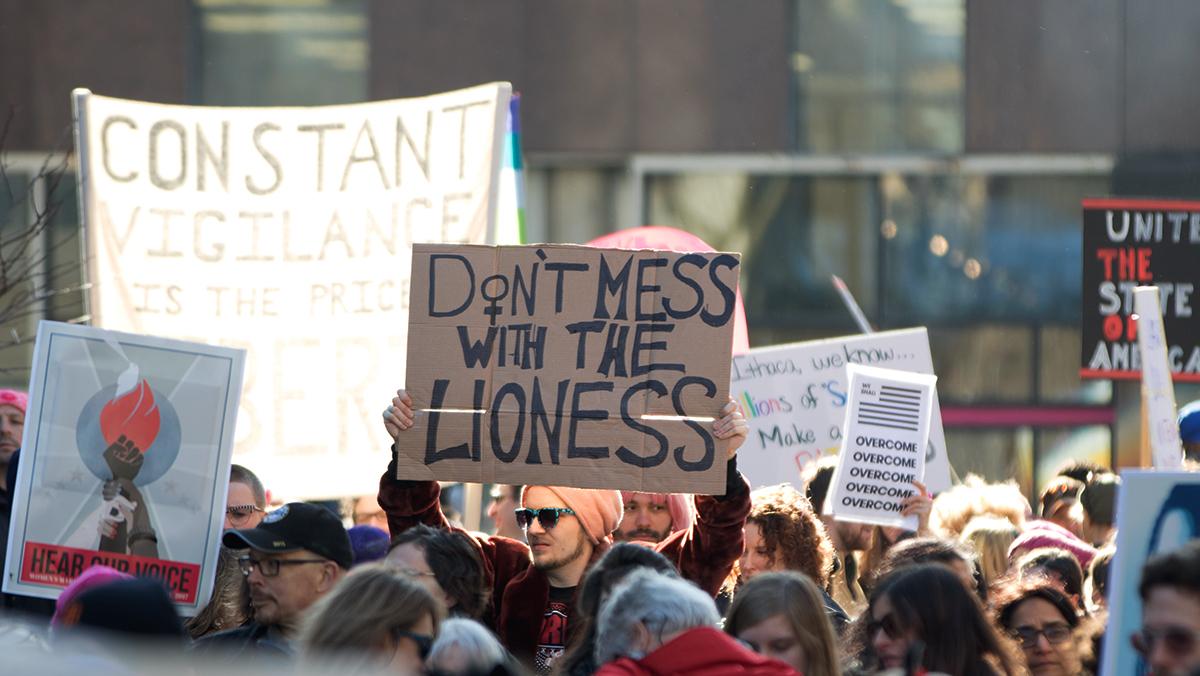 Connor Lange/The Ithacan
In addition to what Trump has said, many now debate how his policies and administration will impact women’s rights.
By Celisa Calacal — Opinion Editor
Published: January 25, 2017

One day after President Donald Trump’s inauguration, millions of women, men and children gathered in hundreds of cities across the globe to participate in a Women’s March. These activists marched in places like New York City; Washington, D.C; and Ithaca to promote women’s rights and protect marginalized groups, particularly in light of comments Trump made during the election that many interpreted as threatening to marginalized people.

On Jan. 22, Trump took to Twitter to comment on the Women’s March and wrote, “Watched protests yesterday but was under the impression that we just had an election! Why didn’t these people vote?” A little after, Trump maintained that peaceful protests “are a hallmark of our democracy.” He also added that he recognizes “the rights of people to express their views.”

Trump has made numerous comments that have been pinpointed as sexist, most notably in a videotape released in October. The tape is of a conversation between Trump and Billy Bush in 2005, in which Trump talked about grabbing women “by the pussy” before meeting an actress on the set of the soap opera “Days of Our Lives.”

In addition to what Trump has said, many now debate how his policies and administration will impact women’s rights. Back in October, during the third and final presidential debate, Trump said he would appoint conservative Supreme Court justices who would overturn Roe v. Wade, the 1973 landmark Supreme Court decision that extended the right to privacy to a woman’s decision to have an abortion.

Trump’s pick for the head of the U.S. Department of Health and Human Services, Tom Price, has voiced his opposition toward abortion and the birth-control mandate of the Affordable Care Act, in which health insurance companies must cover women’s contraceptive services without a copay. In 2012 at the Conservative Political Action Conference, Price said the ACA’s birth-control mandate “is a trampling on religious freedom and religious liberty in this country.”

During her Senate confirmation hearing, Betsy DeVos, Trump’s pick for Secretary of Education, did not directly answer questions about whether she would commit to upholding the guideline that sexual harassment is a form of sex discrimination in violation Title IX. This guideline was established by the Office of Civil Rights under then-President Barack Obama with the purpose of combating sexual assault in schools.

The combination of a Trump presidency with a Republican-led Congress could also make it more feasible for Republicans to pass legislation defunding Planned Parenthood. While the Republican Party has attempted to defund the national health services provider in the past, these efforts were stalled by an Obama veto.

But in early January, Speaker of the House Paul Ryan (R-WI) said a provision to cut off federal funding to Planned Parenthood was included in legislation intended to repeal the Affordable Care Act. The provision was included in a reconciliation bill, a budget measure the Senate can fast-track through the legislation process and pass with a simple majority instead of the standard supermajority.

Commentary: Question everything and practice compassion