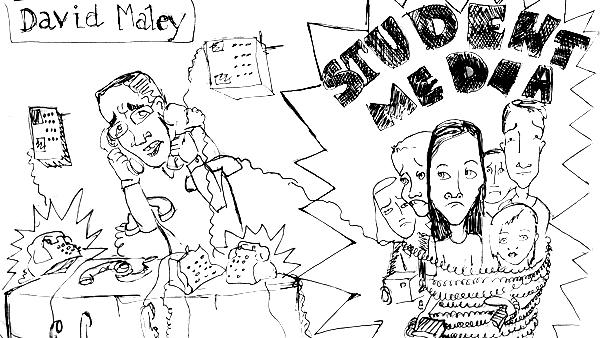 A college community is, or should be, an environment that maximizes discussion, debate, trial and error, and relationship building. In terms of free discourse and fostering an open community, Ithaca College has always stood high. In recent years, however, it seems to be straying from the path.

Last week, President Tom Rochon officially announced a policy that all student media must go through the office of media relations to reach any of the top 84 administrators, deans, assistant or associate deans and directors at the college. Specifically, students must first contact Dave Maley, associate director of media relations, to set up any administrator interviews.

Rochon said the policy should not limit access to administration or cause a time delay. He said he implemented the policy to reduce a tendency of reporters to rely on just a few people to comment on everything, sometimes on so many stories that it detracts from their “actual jobs.” It might be argued, however, that communicating with the media is part of their jobs.

Of the 11 members of the top tier of the administration (the president, five vice presidents and five deans), The Ithacan has directly contacted only seven for stories this semester. Rochon was contacted for only two. Diane Gayeski, dean of the communications school, was contacted the most, for four stories.

Receiving calls for two to four stories from a reporter in a six-week time span can hardly be considered a disruption to “actual jobs.” Having Maley as a facilitator only makes his job and the reporters’ more difficult. Deans and directors should be encouraged to speak to reporters without a facilitator. It’s insulting that they are being treated as incapable of deciding when and how to discuss programs within their schools.

Some community members have already questioned what this policy is intended to accomplish. Past experience makes it clear Rochon has an interest in controlling messages as well as a tendency to act without first gauging the college climate. The policy was announced to the Administrative Assembly and to student media without any prior discourse with any of the involved parties about drawbacks or nuances.

This situation is not without precedent. In 2009, IC View published a first-person account of Israeli violence against Palestinians. The article garnered an intense response. Rochon responded equally strongly. The Ithacan reported at the time that Rochon said the college had failed to raise a level of debate in a “fully balanced and unbiased manner,” and he promised “a stronger internal editorial review policy” in the future. This was followed by a public apology from the editor, Maura Stephens, who later left that position to become the associate director of the Park Center for Independent Media. In response to Rochon, faculty members sent a letter to The Ithacan raising the question of whether “Rochon consulted any faculty or researched past situations to get a feel for the culture at the college before writing his response.” The letter also noted that the underlying message of Rochon’s “promise of a more explicit editorial regime in the future seems to be that the economic health of the college depends on censorship … We are concerned about the chilling effect these actions will have on free expression and inquiry on campus.”

The Rochon administration is becoming increasingly characterized by centralization and a corporate atmosphere. Students, faculty and staff should fight to keep Ithaca College the open and personal community that has made it so appealing in the past.