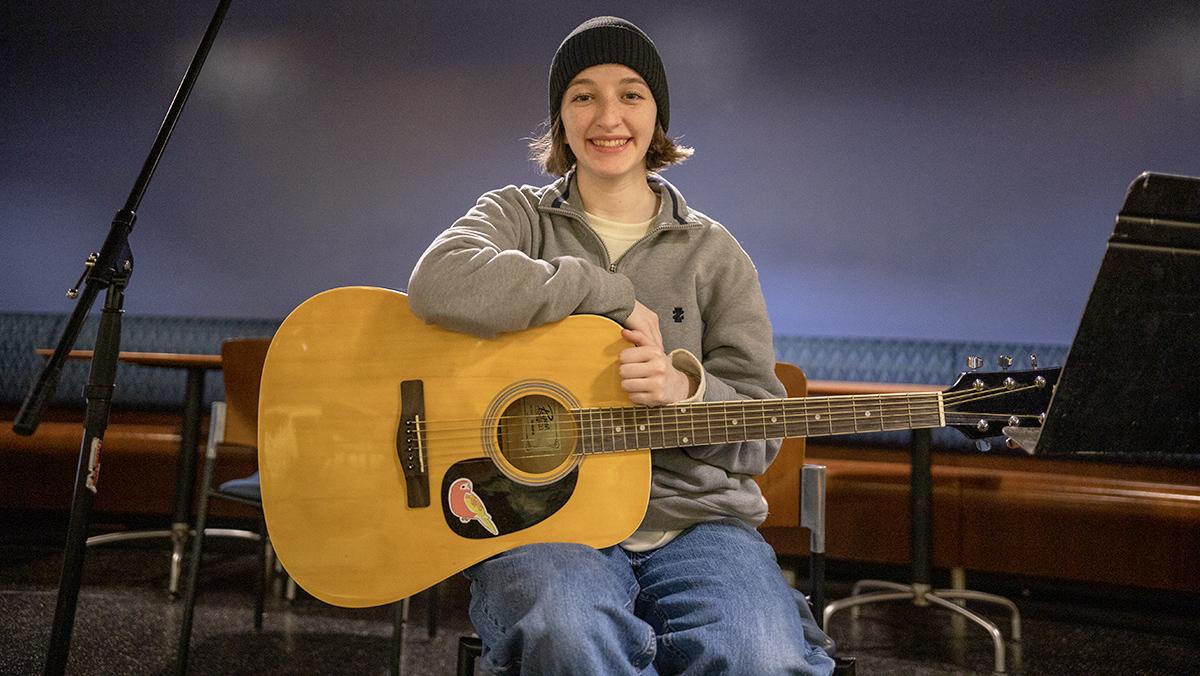 There’s nothing that can make you feel 100 different emotions in one night like Open Mic. Open Mic Night has always been a hidden gem at Ithaca College. Fortunately, keeping up with the Open Mic Instagram account and spreading the word has given us many more opportunities to form a larger community.

Open Mic is a growing community where anyone can perform whatever they would like on stage. Every Thursday from 8–10 p.m., president Ben Macarell and I host the club in IC Square. There are ultimately no performance or audience rules, which gives everyone some wiggle room to express themselves.

I heard about Open Mic during my first semester on campus in Fall 2022. The main reason why I wanted to sing and play my guitar for an audience was to allow for a more natural transition into college. Throughout high school, I was always doing something musical. I was in an a cappella group, a jazz band and even started putting my own music on Spotify. It was difficult to completely cut the music off as I was not taking any kind of music classes at Ithaca. Open Mic is a great way for those that are rusty with stage performances to continue their journey as artists.

Stage fright had never really been an issue until I neglected practicing performing on stage. Honestly, I was shaking the first few times I played at Open Mic Night because I was very rusty. As time passed and I understood how prepared I needed to be to play my music, I gained confidence. Of course, some days I would learn a song the day before and play it, so sit doesn’t always matter how prepared you are. As long as you are passionate about what you execute, no one will ever judge you at our club. We clap for a performer no matter what our opinions may be about them.

One of the best parts about Open Mic Night is the new friendship bonds we build. The audience is allowed to chit-chat, do homework and get involved with some of the acts. Keeping the environment more casual allows for a more relaxed place to meet people. The chances of stage fright and embarrassment are slimmed down when you have everyone supporting you without being formal.

Some of our most recent acts included junior Rob Hirko, an original rap artist, first-year student Bella Joyner playing her guitar behind her back, and a stand-up act ranting about how hot Tom Cruise is in “Top Gun.” All of these acts caught the audience’s eyes because we know how much work goes into their art. The natural flow of Hirko’s rap lines are insane. He had a hiccup in one of his performances where he couldn’t remember the lyrics and he started freestyling! He proved that despite feeling nervous about messing up, you can improvise your way out of it.

There are many giggles, a few tears and plenty of smiles on the audience’s faces throughout the night. For example, one tear-jerker was someone that sang about their ex by utilizing Beyoncé songs. Original songs and poems also can set a melancholic mood that makes the audience really think about the lyrics and words of the performer. It is nice when you are refreshed with different moods because each act ranges from comedic skits to journal entries about losing someone you love. If I am on the verge of crying because of an act, typically the next act has me laughing until I can’t breathe.

Whether you are a rookie, professional or someone who just likes to watch, there is no place on Ithaca College’s campus more open to a wide array of passions than Open Mic Night. Any performer is welcome on the stage. We provide microphones, karaoke, a keyboard, a music stand and speakers/amps for the act. To sign up, scan the QR code on our flyers at the event or click the link in our
Instagram bio @ic_openmicnight.