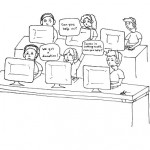 If Gov. Andrew Cuomo’s budget proposal is passed, state funding to the college would be cut by 10 percent — increasing tuition and room and board fees. The reduction would shrink the college’s Bundy Aid, a program that provides direct financial aid based on the number of students the college graduates.

The college could take a significant hit if tuition increases. The economy is still hurting, and families need to be fiscally responsible. Prospective students may decide not to enroll at the college, and next year’s freshman class could be under-enrolled. Current students may not be able to afford the increase, and our retention rate could also drop. Those who do stay may have to take out more student loans — landing themselves and their families in more debt.

The college needs to find areas to raise more money. It already raises millions by calling alumni and receiving contributions. But that alone won’t help. Right now, almost the entire operating budget is made of tuition fees — a dangerous place to draw from when the economy is not ideal.

Departments and programs should do fundraising similar to how sports teams raise money. The college has been reaching out more to alumni to contribute large gifts, and it is urged to make this the top priority. In October of 2006, the college started a fundraising campaign that far surpassed its goal of $145 million in Spring 2008. Another fundraising campaign could be a realistic option.

In order to keep students, fundraising options need to be the primary method ­— not tuition hikes.