Point/Counterpoint: The right to bear arms 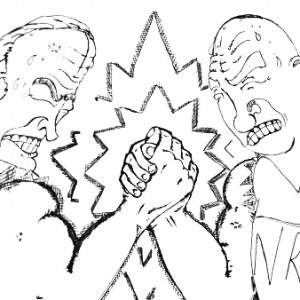 Commentary: We should change gun culture before taking rights away

Horrendous crimes like the Sandy Hook shootings did not occur because of guns. Who is really to blame for these occurrences, the tool or the operator? Guns were merely the vehicle by which these criminals chose to act.

If someone is intent on committing such a crime, they can find a way to do it that does not involve guns. Crimes such as the ones we have recently witnessed should make us question the lack of education and respect for firearms, rather than make rash decisions limiting our Second Amendment rights.

As times have changed, so has the average American’s exposure to firearms. Many Americans allow their children to play video games in which they are encouraged to shoot at other people with assault weapons for fun. Yet many of these same people believe that these weapons should be banned from our country. If we really expect people to respect firearms, why do we allow such young children to take gun control, if even with an “imaginary” weapon, so lightly?

Most of the people pushing for harsher gun control laws have never had substantial exposure to guns. Have any of us seen President Barack Obama ever handle a gun or even speak about his personal experience with handling guns? There is a huge difference in opinion between those who have been exposed to guns and those who have not. Those who have not been properly educated on gun control do not understand the procedures that responsible gun owners use to ensure safety and therefore do not understand just how safe someone can be with a firearm.

In Switzerland, the government gives every man an assault rifle to keep in his home, and they are all trained on how to properly use and maintain their weapon. Switzerland has almost nonexistent crime rates. How can we say that these weapons will cause more crime when another country has already demonstrated that, with proper education, the opposite is true?

Criminals do not follow laws. If they did, then they would not be criminals. Passing laws to make it more difficult to legally buy a gun will not solve anything. Washington, D.C., has some of the strictest guns laws in the nation. High capacity magazines, considered to be able to hold over 10 rounds  in Washington, D.C., are already outlawed there. As David Gregory showed on “Meet the Press” when he waved around a 30-round magazine, in Washington, D.C., people here can still have access to these things.

By passing harsh gun control laws, we are virtually letting the “bad guys” win. How do we expect to defend ourselves against a gunman if we, as law-abiding citizens, are denied the rights given to us by the Second Amendment? The best way to protect ourselves from these sorts of crimes is to ensure that responsible citizens can own weapons.

The passage of strict gun control laws is not only an infringement on every American’s constitutional rights, but also poses a serious national and international security issue. We have to remember, firearms are inanimate objects. They are by no means responsible for these crimes. Obama has recently said, “If gun control saves one child, it’s worth it.” We can save a lot more innocent people than just one child, and President Obama’s plan is not the way to do that.

Grace Demerath is a sophomore music education major and member of IC Republicans. Email her at gdemera1@ithaca.edu.

No amount of gun control legislation enacted in the past decade would have prevented the shootings in Newtown that ended in the deaths of 28 people. This was an anomalous tragedy involving a very disturbed man. Using recent violence as a typical case in favor of gun control isn’t helpful for the cause, except for its use as a dramatic focal point for fostering public relations.

The shootings at Virginia Tech in 2007 aren’t a justification for gun control laws, nor are the shootings at Fort Hood, Columbine or anywhere else. Nothing short of a complete and retroactive ban on all forms of firearms would have prevented these shootings. We can, and should, discuss the culture of violence that pervades our society, but no piece of gun control legislation that has passed through Congress in our lifetimes would have changed that.

Using these tragic incidents as a case for gun control legislation isn’t helpful because it allows gun advocates to frame the debate exactly how they want to see it. If we only talk about gun control in terms of big, dramatic shootings, they can point out that the shooters in these cases would have found other ways to kill and that the debate should be focusing on mental health issues instead of guns.

Why do we have relatively little gun control in the first case? Part of it certainly has to do with money. Gun companies give a lot of money to lobbying groups and are deeply connected to the National Rifle Association, a group ostensibly representing gun owners. The $17.4 million spent in the 2012 elections by the NRA on behalf of these gun companies certainly affects our politicians’ decision-making skills on the subject.

More than just the money, advocates of gun control have lost the PR battle in this debate. The NRA and other supporters of so-called “gun-rights” have successfully framed the discussion by comparing guns to other items that are potentially deadly. They frequently point out that if we limit the purchase of guns, what’s next? Knife control? Background checks for cigarettes? A waiting period for high-cholesterol foods?

Guns are designed to kill, and that’s it, whereas the multitude of other potential uses for knives is obvious. The freedom involved in purchasing a gun is the freedom to kill, and in so many other aspects of our society that is a freedom we are not comfortable giving out. Unfortunately for those of us in favor of a certain amount of gun control, we don’t have anything to compare guns with to make them seem particularly deadly.

So why bother with background checks, waiting periods, bans on high-capacity magazines? Because each of these measures has the chance to save lives. They might not bring our firearm-related murder rate down, they might not prevent mass shootings, but as far as I’m concerned, if they can stop the sale of a gun that would end up killing a single person, they will be effective. The lives of the people killed by firearms are more important than any individual’s right to own an assault rifle, and that is how we need to frame this debate.

Stephen Burke is a senior television-radio major and politics minor. Email him at sburke4@ithaca.edu.