Last week, The Ithacan reported seven football players were suspended from the first game of the season because of a violation of team and athletic department rules. In the same issue, The Ithacan also reported that four students were judicially referred for a college code violation of hazing. Ithaca College refused to release any additional information about either case because it would have violated the students’ privacy under the Family Educational Rights and Privacy Act. A wall of silence was built instead of using the incidents as a learning experience for the community. 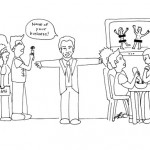 Since 1974, FERPA has protected students’ privacy and education records — including test scores, medical records and disciplinary records. Head Coach Mike Welch said he couldn’t comment on the football players’ suspensions because of the students’ privacy, while Dave Maley, associate director of media relations, said he could not comment on “individuals who may have been referred to the campus judicial system.”

When students who represent the college participate in hazing, the campus community has a right to know. For cases like hazing, it may be time for the Department of Education to take a closer look at FERPA. FERPA stifles dialogue about important issues. If the college was able to release more information, the community could take measures to help victims of hazing and protect future victims. Hazing is not a private matter but a danger to the community.