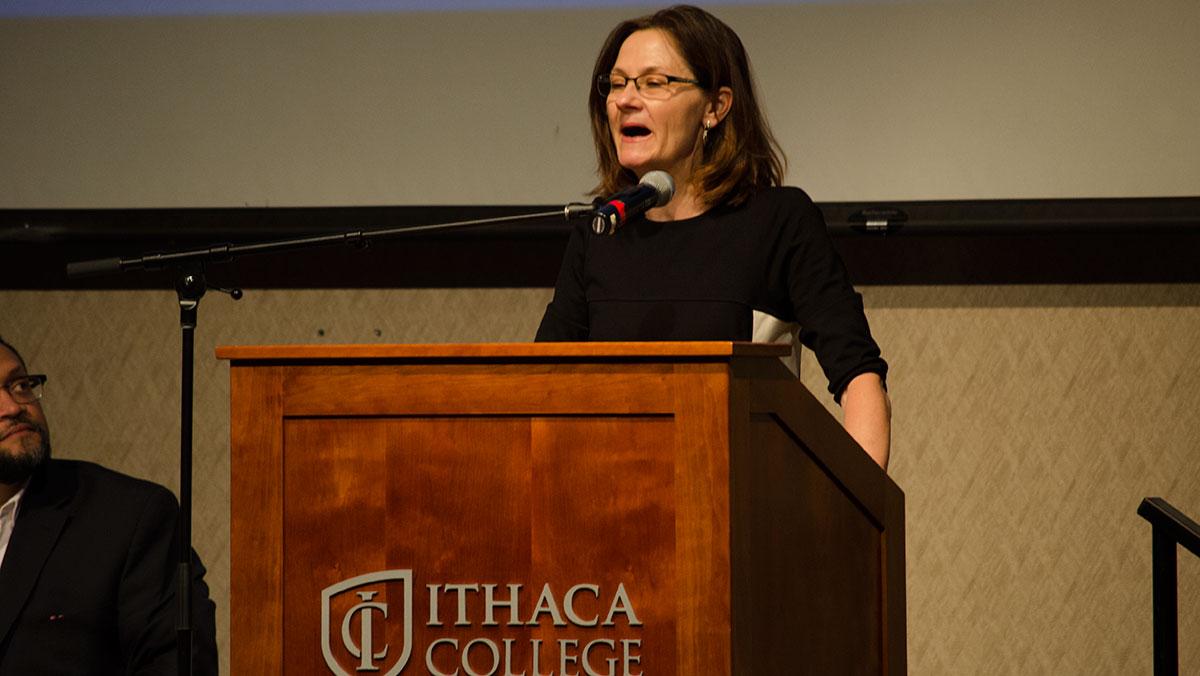 Fernando Ferraz/The Ithacan
Marie Gottschalk, author and professor at the University of Pennsylvania, and her colleague Adolph Reed Jr. engaged an audience in a Q&A about mass incarceration in the U.S. on Sept. 17 in Emerson Suites B.
By Jenna Mortenson — Contributing Writer
Published: September 23, 2015

Over a hundred students packed the seats of Emerson Suites B on Sept. 17 to listen to a discussion about mass incarceration in the United States. Marie Gottschalk, author and professor of political science at the University of Pennsylvania, and her colleague Adolph Reed Jr. led the discussion, which was moderated by Carlos Figueroa, an Ithaca College professor of politics. During Gottschalk’s years as a professor, she taught in prisons as well as in the classroom, experience she cited as vital in shaping her views on what she described as the carceral state.

She said this carceral state is defined as the problem of overpopulation of U.S. prisons and former prisoners’ inability to escape the system.

“As we sit here, there are 2.2 million people sitting in jails,” Gottschalk said. She went on to say that 1 in 23 Americans is captured by imprisonment, parole or state surveillance, leaving them a victim of the carceral state. Gottschalk cited factors such as socioeconomic status and race as influential in causing the imbalance, and urged the students to challenge this standard through activism, politics and general awareness of the issue.

The presentation by Gottschalk and Reed was followed by an extended question-and-answer session where audience members posed their own questions about race, economic factors and the stigma affecting former prisoners after their release.

Contributing Writer Jenna Mortenson spoke with Gottschalk after the presentation about her perspective on mass incarceration, the state of the criminal justice system and other issues she talked about during the discussion.

Jenna Mortenson: How can students at a place like Ithaca College affect change with an issue such as this? If someone wanted to get involved, how could he or she make a difference in changing the carceral state?

Marie Gottschalk: One of the things I was trying to say is that people need to think about what real political engagement is. It’s important to do community service, it’s important to do volunteerism, but it’s also important to connect up with politics more directly and not to think that politics is something that’s dirty or something that’s bad. In some ways, we need to reclaim the political space and the sense of agency that you can make a difference in some way. And I think the other thing is to educate people about mass incarceration and to make the issue more visible to people. One of the great things for me about teaching in a prison is that I take students inside and they begin to talk to their parents and to their friends, and they demystify prisons. So I think making it visible is very important as well.

JM: There’s been quite a bit of talk about the issue of racial tension between police officers and people of color, including on college campuses like ours. I know the carceral state is an issue that goes beyond racial tension, but would you say the two issues are intertwined?

JM: Ideally, how would you envision a solution to the carceral state in the United States?

MG: At the end of the day, we could send fewer people to prison and give them shorter sentences. The solution to the problem is very simple. The people who have been to prison should not have great restrictions on their rights. The policies are not very difficult. What’s very difficult is the politics. So we need to have comprehensive sentence reform, get rid of mandatory minimums, get rid of three strikes laws. I could [write] on the back of an envelope and say what the policies are. The real question is how do you create the political will and the political courage to make those kinds of policies.