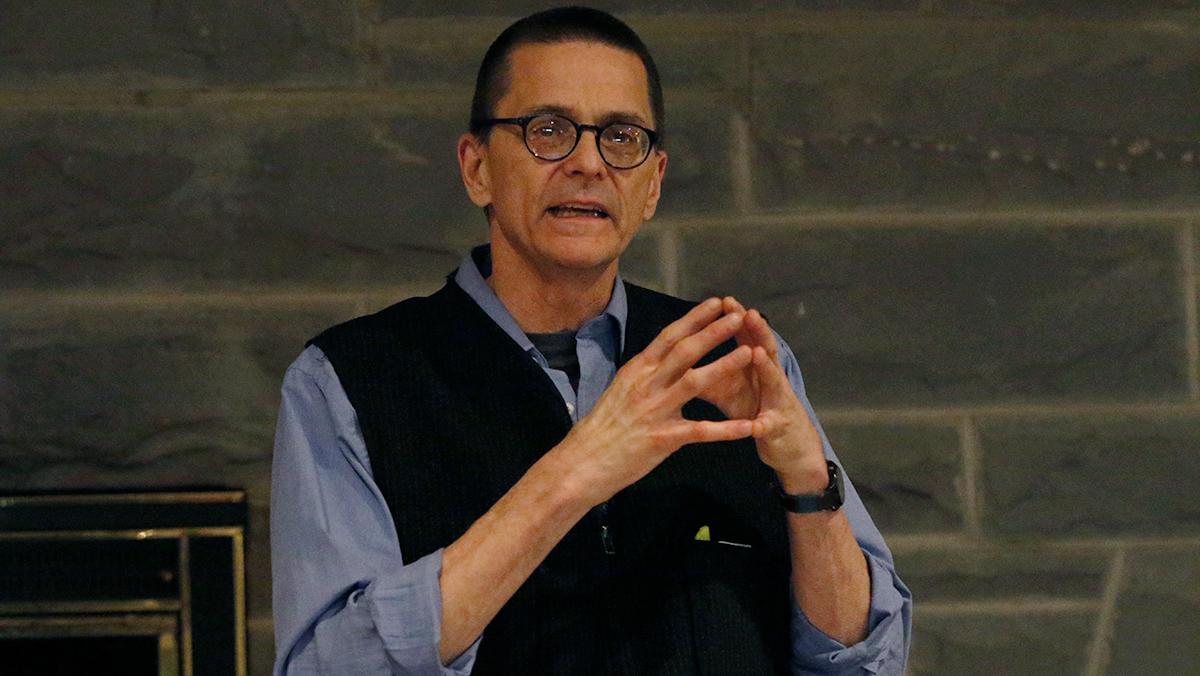 Maxine Hansford/The Ithacan
Robert Jensen, professor at the University of Texas at Austin, discusses his book, “The End of Patriarchy: Radical Feminism for Men,” on Feb. 16.
By Celisa Calacal — Opinion Editor
Published: February 22, 2017

Radical feminism can be for men too: This is one of the premises of the book “The End of Patriarchy: Radical Feminism for Men.” Written by Robert Jensen, journalism professor at the University of Texas at Austin, “The End of Patriarchy” pinpoints feminism and a critical look at patriarchy as a means of achieving social justice.

Jensen discussed the feminist arguments in his book during a visit to Ithaca College on Feb. 16. His work with feminist critiques of male dominance and patriarchy began during his time as a graduate student at the University of Minnesota, where he studied pornography through a feminist lens.

Celisa Calacal: Can you explain the synopsis of the book?

Robert Jensen: The book is my attempt to explain the problem of patriarchy and the feminist response to that problem, and specifically in a language that will be accessible to men, hence the title: “End of Patriarchy: Radical Feminism for Men.” Now the title “The End of Patriarchy,” as I’ve been saying, is aspirational. I hope to see the end of patriarchy someday. I’m not predicting it or suggesting the end of patriarchy is here. But I am suggesting that this style of feminism typically called radical feminism is our best vehicle for trying to challenge patriarchy.

CC: What inspired you to write this book?

CC: Why is feminism the answer to a socially just society?

CC: How do race and class intersect with the argument you make?

RJ: Well how they intersect depends on the specific issue, the moment in history or in the society you’re in. But you bring up the question of what’s typically called intersectionality: the understanding that no system of domination and subordination acts independently from other systems. And that’s a crucial factor in trying to understand problems of social justice. … There are lots of places where you can see how these systems interact. … There’s research that shows that African–American girls are disciplined at disproportionately high rates in the school system. Now that’s a result of the intersection between racism and sexism, expectations placed on girls, expectations placed on African Americans, stereotypes about how people in those two groups act. And so if you’re an African–American girl in the American school system, the disciplinary procedures you may be subjected to might be based on stereotypes about the intersection of those two identities of race and gender. That’s what we mean by intersectionality. It’s a way of recognizing it’s a complicated world. And we have to think about it in all its complexity.

CC: What does racial feminism look like for men?

RJ: Well the argument I would make — and it’s based very much on my own experience — is that while the vast majority of injuries visited upon people in patriarchy are suffered by women and girls, that patriarchy also presents a challenge to men. Men grow up in this culture with what some of us call a very toxic conception of masculinity based on conquest, control and domination. In other words, to be a man is to be in control, and to dominate and to be aggressive. Those are the hallmarks of masculinity in this culture. Now as a result of that, men have some advantages over women, but there’s also a cost to men to living out that toxic masculinity. And the argument that I would make to men is that there are two compelling reasons to support a feminist critique of patriarchy. One is what we call the argument from justice: It’s the right thing to do. The second is the argument from self-interest. And that argument says that while there might be some short-term material benefits to you, a man, for living in patriarchy — you might have an advantage over women in certain settings — that short-term, material self–interest comes at a long-term cost to your own humanity and your own sense of self-fulfillment. So my argument is that men should do the right thing. … If you want to lead a rich and fulfilling life, you’re going to have a much easier time doing that if you can critique that toxic conception of masculinity and, to the degree possible, transcend it.

CC: Do you think modern mainstream feminism is working or is staying true to feminism?

RJ: Well, opinions will vary on what feminism actually is. Feminism is like any other movement. There are lots of different perspectives. There is no single feminist in that sense. … Here’s what I would say. I am a male in contemporary America. I was raised in a patriarchal society with that toxic conception of masculinity. What I can say is that by engaging feminism, especially radical feminism, I have been able to step back and critique patriarchy, try to be critically self-reflective about my own behavior in patriarchy and try to articulate a different conception of what it means to be a male human living in this society.

Senior Shyanne Ruiz talks about how her involvement in the Vagina Monologues has encouraged her to fight against women’s violence with the One Billion Rising flash mob on V-Day.