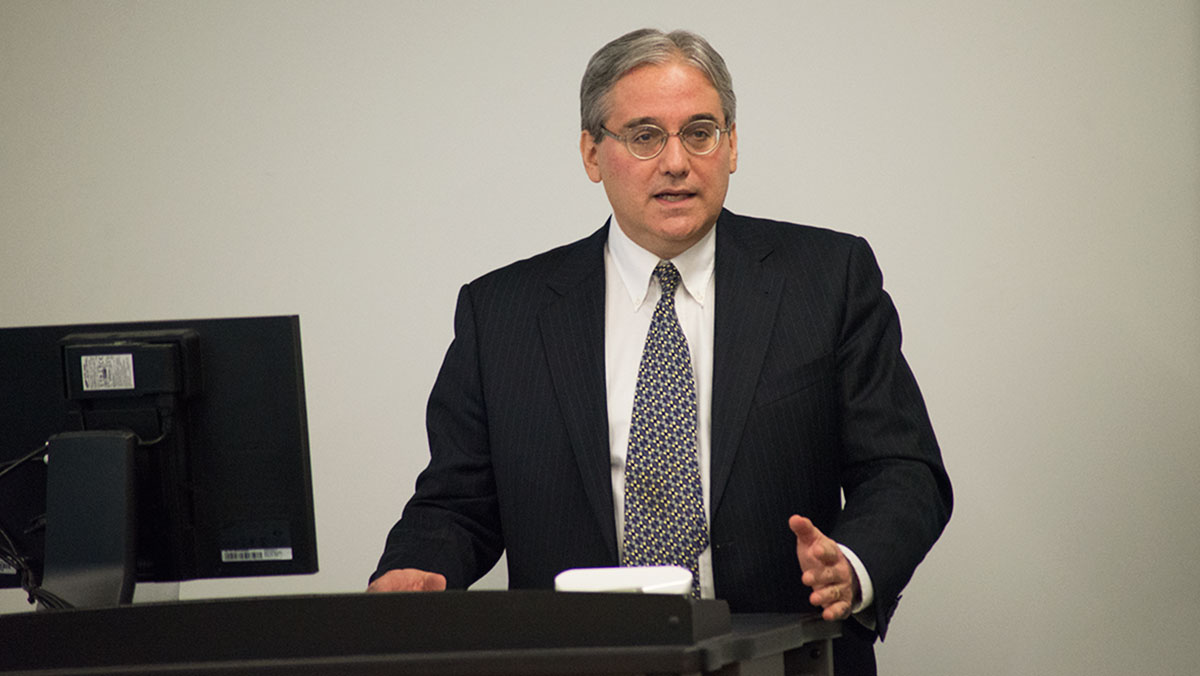 William Jacobson, clinical professor and director of the Securities Law Clinic at Cornell University and founder of the conservative blog Legal Insurrection, facilitated a discussion Oct. 7 at Ithaca College about an incident at the local Beverly J. Martin Elementary School on Sept. 18 where Palestinian activist Bassem Tamimi and others spoke to third graders about the Israeli-Palestinian conflict. Jacobson said he has qualms about the appropriateness and objectiveness of the presentation.

He also said Tamimi was not an authorized guest at the school that day. His friend, Ariel Gold, who was authorized to speak, invited him to present with her without the school’s permission.

Prior to the Oct. 7 presentation, Staff Writer Kyle Arnold spoke with Jacobson about Bassem Tamimi, the controversy and his discussion.

Kyle Arnold: What will you be talking about in the presentation?

William Jacobson: The presentation is less than a speech and more so a discussion, and what it’s going to be discussing is the issue of how the Israeli-Palestinian dispute is presented in education in the specific context of what just happened at the Beverly J. Martin School in Ithaca. I’ll probably talk for 15 or 20 minutes, give some background and then open it up for discussion and hopefully get people to talk with each other.

KA: It says in the Ithaca College Intercom post that you will be talking about the incident in the “context of broader anti-Israel activism in colleges and schools.” Can you explain exactly what that broader context is?

WJ: Depending on the campus, and it varies widely from campus to campus, there is a very active boycott movement against Israel, including an academic boycott movement against Israel. Some places it’s not very active, others it’s more active. So I think what happened at the Beverly J. Martin school is part of that broader context because it was sponsored by the same people, Jewish Voice for Peace, and there were a couple of others who are very active in the boycott movement, so I think you have to view what happened there in the broader context. I don’t think you can view it as an isolated instance of anti-Israel activism. Those groups push that activism at the college level and apparently now at the elementary level as well.

KA: Do you think that, objectively, what happened was inappropriate?

WJ: Well, from what the superintendent had said about what’s expected and the statements that people have posted as to what happened, yes. Now we don’t have a recording of it, but several of the people who attended and participated in the presentation wrote on Facebook and in letters to the superintendent about what happened, and it is absolutely clear that the goal and reality of the presentation was to generate sympathy for the Palestinians and against the Israelis, and you can like that or not like that. People may say that’s a good thing, but it raises questions as to whether it was an appropriate event, first of all for third graders, and second in a public school where students are essentially forced by law to attend and whether it was consistent with Ithaca school district’s understanding and intentions. So all those things lead me to say that, objectively, this was not an appropriate presentation regardless of where someone may come down on the Israeli-Palestinian issue. This to me may have been a different situation if it took place at a university where students have the capacity and wherewithal to do research on their own, and hopefully a professor would present speakers from both angles. But this was a third grade class, and that’s what the people who did this can’t seem to grasp, that these are 8- and 9-year-olds and you have given a political presentation to them. Most people in their gut would say that’s not OK.

KA: How does a Palestinian activist make his way to Ithaca, New York?


WJ: There are two things going on here: One was the presentation itself. The other is that they never cleared him with the school to be a speaker, and I think there are serious issues if he was an appropriate speaker in a third grade class. Again, I might feel differently if it was a university and he has been traveling all over the country speaking at universities, and I don’t have an issue with that. But it’s a third grade class, and he is being held out as a model for nonviolent resistance, but he has advocated stone throwing and he is unapologetic about that. Even more important, he’s best known around the world for using children in demonstrations, including his own children, by putting them in dangerous situations of confronting Israeli soldiers surrounded by cameras hoping for that viral video moment. He puts children in that position, and we have documented this. He praises children. “That’s their duty,” he was quoted saying in The Jerusalem Post recently. There are serious questions about somebody who advocates stone throwing and who uses 8- and 9-year-old children in his videos by putting them in difficult situations, whether he, as an unapproved speaker, should have been brought to that classroom.