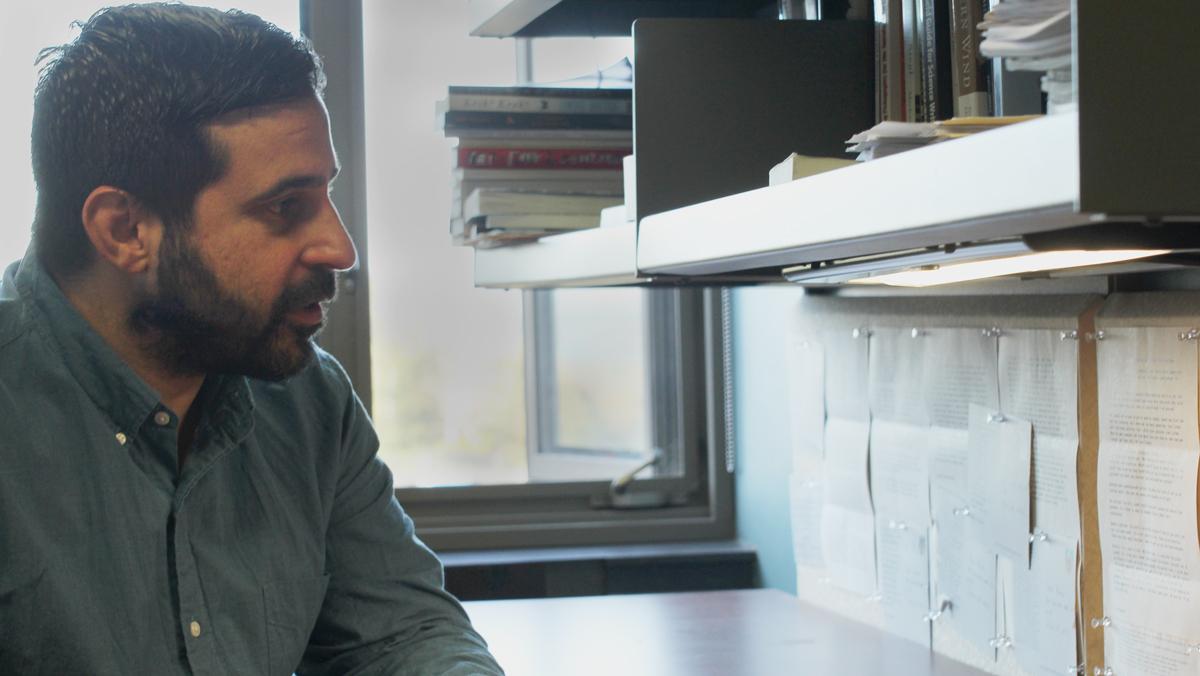 Lexi Danielson/The Ithacan
Raul Palma, assistant professor in the Department of Writing, examines letters of advice written by Cuban writers that he received prior to his trip.
By Brontë Cook
Published: October 23, 2019

On Oct. 24, Palma will present his experiences at the Tompkins County Public Library (TCPL). In his lecture, he will also discuss the role of imagination when examining the past and read excerpts of his work.

Opinion Editor Brontë Cook spoke with Palma about his relationship with Cuba and his upcoming presentation at the TCPL.

Brontë Cook: Before your trip, what was your relationship with Cuba?

Raul Palma: My mother and father are both from Cuba, and I was born in Miami. … Prior to this trip, I’d never gone. I was largely forbidden from traveling to Cuba. … My grandfather, he spent time in a Cuban jail around the time that Castro came into power. He was part of a group of people that were protesting. So he was put in jail and eventually got out and went to Miami. … The CubaOne Foundation came in, and they were really interested in getting people like myself to the island to meet other Cuban artists. … They led this trip to Cuba with [10] of us. … Prior to the trip, … they reached out to a bunch of Cuban writers and artists, including Richard Blanco, … and they asked them what advice they would offer us right about going to Cuba for the first time, so these letters were just coming in the mail weekly.

BC: How did you feel when you would get those messages in the mail? Were you excited, nervous?

RP: A little bit of both. Nervous just because I’ve heard all kinds of things from my family but mostly excited. It was a cool opportunity, as a fully funded trip, to go with people like myself to meet other Cuban artists and writers. … In addition to that, we were also given a reading list. … I felt that it was my responsibility to be as prepared as I possibly could.

BC: How did your relationship to Cuba change during and after your visit?

RP: It was almost immediate. I’d read the letters that kept coming in the mail, so I had an idea of what to expect. But something that really struck me was the moment we landed at the airport. We’re kind of walking around, and I noticed that there was no advertising. I remember when I realized that, it really struck me. There was only one, I think it was leaving the airport. It was a giant billboard for like an iPhone or something. That was it. … I began to realize fairly early on that … I was in a different world. I think none of my parents’ stories or grandparents’ or family stories could have prepared me for just that small observation.

I was with a cohort of others. It was 10 playwrights, fiction writers, journalists. We were hanging out with each other. A whole bunch of Cuban Americans hanging out, experiencing Havana together. That was interesting too because we were led from one artist to another on a daily schedule. As we did these trips, it felt very much curated, … like there wasn’t, at times, a lot of room to … step out and really explore, kind of get lost. So I found that interesting being in Havana. I spent more time with my cohort than really going out and engaging with many different artists that were not on the itinerary. … There were a lot of surprises in that sense.

BC: What was it like coming back to the U.S. after your trip? How did you bring back what you learned?

RP: Being in Cuba, … I felt a moral and ethical responsibility. To my family, who were not really excited about my visit to Cuba, but also to the Cuban people. … And as somebody who loves reading about Cuba, Cuban history, Cuban literature, I’m always cautious right when I see the way that Cuba can be … made to seem strictly exotic, like a tourist destination. … I felt the responsibility to kind of … figure out a way that I could write about Cuba in a way … that I felt would honor what I had experienced there, the people that I’ve encountered. That was a large question for me living in Miami. I had never been able to write about Cuba. I couldn’t imagine that particular space.

BC: You’re going to present on your experience at the Tompkins County Public Library on Oct. 24. What will you cover?

RP: I’m going to talk about the role that I played, what it means, the responsibility that I carry and going to Cuba and getting to meet the Cubans who are actively working there but doing so with the purpose of trying to heal or build bridges between Cuban Americans and Cubans. So I’ll start with that. I’m going to talk a little bit, too, about my family history. A little bit about my grandfather and his experience in a Cuban jail, and I’m also going to read some of the work that I’ve produced as a result of the trip, some of it set in Cuba, some set in Miami. … Mainly talking about … the responsibility I felt as a writer and as a Cuban American, both to my family but also to Cuba and to the larger world in general.

BC: Why do you think it’s so important to bring this kind of dialogue into spaces here in Ithaca?

RP: A place like Cuba or even Miami, … people tend to imagine them in particular ways. … I had all these narratives as to what I could expect and how dangerous it would be — those kinds of things. … There are these narratives that form around these particular places, “exotic,” “exceptional.” And going there and really looking, really observing, writing about it … and bringing it back here, what I hope it does is offer a chance to kind of look beyond these popular images and see that they’re real people, real lives, real consequences to actions. So, that’s something that I’m fascinated with. It’s a larger project just in my own scholarship. I’m fascinated with popular imaginary and why we imagine certain things in particular ways that so often depart from the reality of the situation. Particularly in today’s climate, it seems that we can benefit by really looking as an act of love at one another, a dialogue exchange as opposed to a kind of entrenchment and reducing communities and societies into just these flooding ideas. … And I think we could all benefit from that.