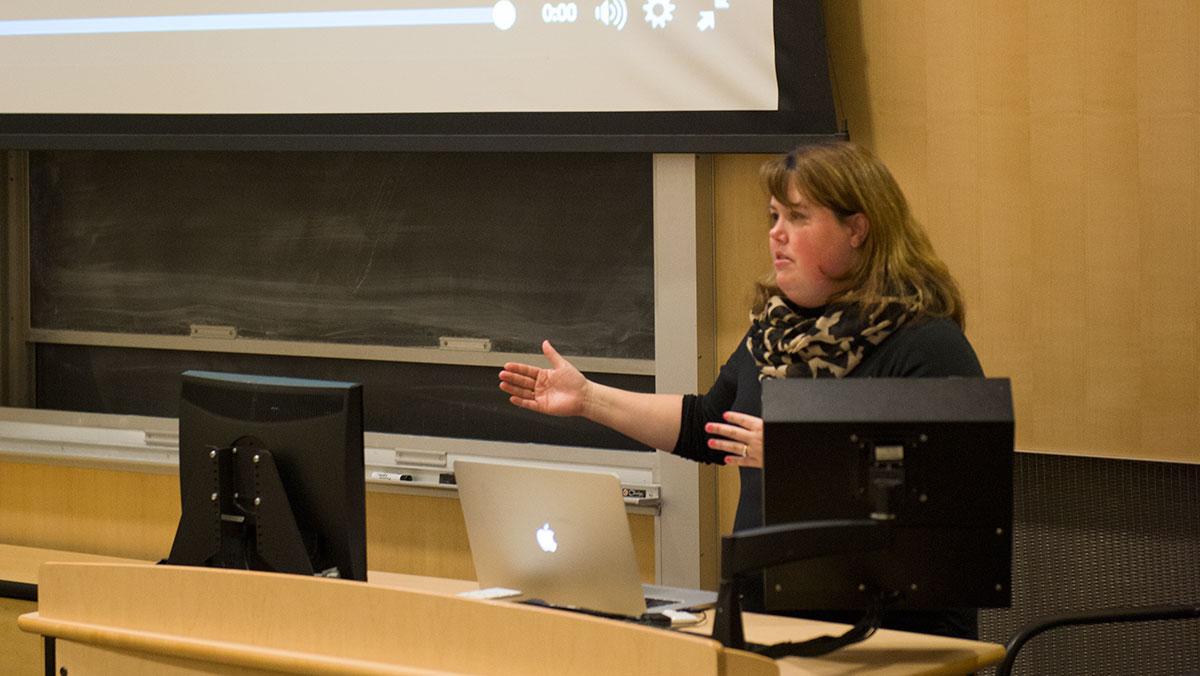 Chrissy Guest, assistant professor of media arts, sciences and studies, is producing an original documentary highlighting the achievements of women in the traditionally male-dominated field of animation.

The film, “Beyond Ink and Paint: The Women of Animation,” is part of a larger project to create an oral archive of her interviews at the University of California, Los Angeles, with the support of the national organization Women in Animation, Guest said. The weekend of March 3–5, Guest taught the Media for Social Responsibility minicourse for Women in Media Month.

Opinion Editor Kayla Dwyer spoke with Guest about her documentary, her experience as a woman in the field and her hope for young women entering it.

Kayla Dwyer: What exactly is the documentary about?

Chrissy Guest: There’s a famous letter that Disney sent to all of the women applying to his studio. It’s a rejection letter that women would receive. … What it said is that women do not hold creative roles at Disney because they do not have the aptitude to do so, and therefore, you can apply to the ink and paint department — that’s where girls apply. … This letter kind of summarizes why the film was called “Beyond Ink and Paint.” … My film focuses on about five to seven historic women who contributed to the animation industry. It doesn’t matter if they were in a studio or not — we’re looking at the firsts. From there, we’re looking at the contemporaries of today — the women today of the industry who are winning awards, who are still making that ground way in the creative field of animation. And we’re looking at the struggles they still face.

KD: You have a lot of experience in the television industry. What inspired you to pursue this study in the animation industry?

CG: I love animation. … I was the art director at Channel 9 as well, and at CBS. So I not only directed and did the technical side, I did all their motion graphics. … When I came here to Ithaca College, I was positioned officewise next to professor Jason Harrington, who teaches animation here. I think it was fate, and we got talking. … I said it would be really interesting to do a gender studies course when you launch the [animation] minor, specifically on women in animation because we always talk about the men. … I knew if anyone could find the resources I need for the course, [communications librarian] Cathy Michael could, so you could imagine my shock when Cathy couldn’t. Because they don’t exist. So there’s no actual scholarly text on women in animation. … So I thought, “We need to change that.”

KD: Throughout your career in the media, have you seen attitudes toward women in media change?

CG: When I started in the industry directing in the control room, I was usually the only woman. But by 2003, there were a lot more women going into tech, so there would be two, maybe three of us at a time. … I was fortunate enough to get to interview then–first lady Hillary Clinton, but I was the only woman. I remember being selected as the pool camera for that. Pool camera means no one else goes. It’s just me, and then all of the stations in the surrounding areas have to get their footage from what I shot. That was really stressful because a lot of people can be very closed-minded and very mean. … I just felt like there were a lot of hoops. And there still are hoops, but if there’s one thing that women are, it’s that we persevere.

KD: Obviously there is still disparity in the numbers of female representation in the media, but how do you think we should look at those numbers? Is there a solution?

CG: At animation schools right now, 60 percent of them are made up of women, and they graduate. In the animation industry, those women only occupy 20 percent of the jobs. Where are they all going? My research over this coming summer is to address as an educator what needs to happen. Where is the support gap? Because it’s from school to work that the gap happens. It’s not in them graduating. They are graduating with the same tools as their male counterparts, so what is affecting their ability to enter the industry? … What is it that we can do as educators to help close that gap? I really believe mentorship is a big thing. … We, as women, also have a responsibility to mentor each other and help each other move up, and I think that is a lot of the issue, too — both men and women working to bridge the gap and make inequality nonexistent.

KD: What did you want students who attended the minicourse to get out of it?

CG: One of the things I deal with in advising students a lot is just preparing them to be more aware that the world is not always as wonderful as we make it here at school. … Things may not turn out the way you expect them to, that they would here. And that’s not OK, but I feel like I have to prepare students for that as well as prepare them for the challenges of being heard. … I hope a lot of the women left the class thinking, “I know what I need to do to make sure I’m including other women, and I’m not putting my own bias on them, and we’re not tearing anyone down for any choices that they make in life.”