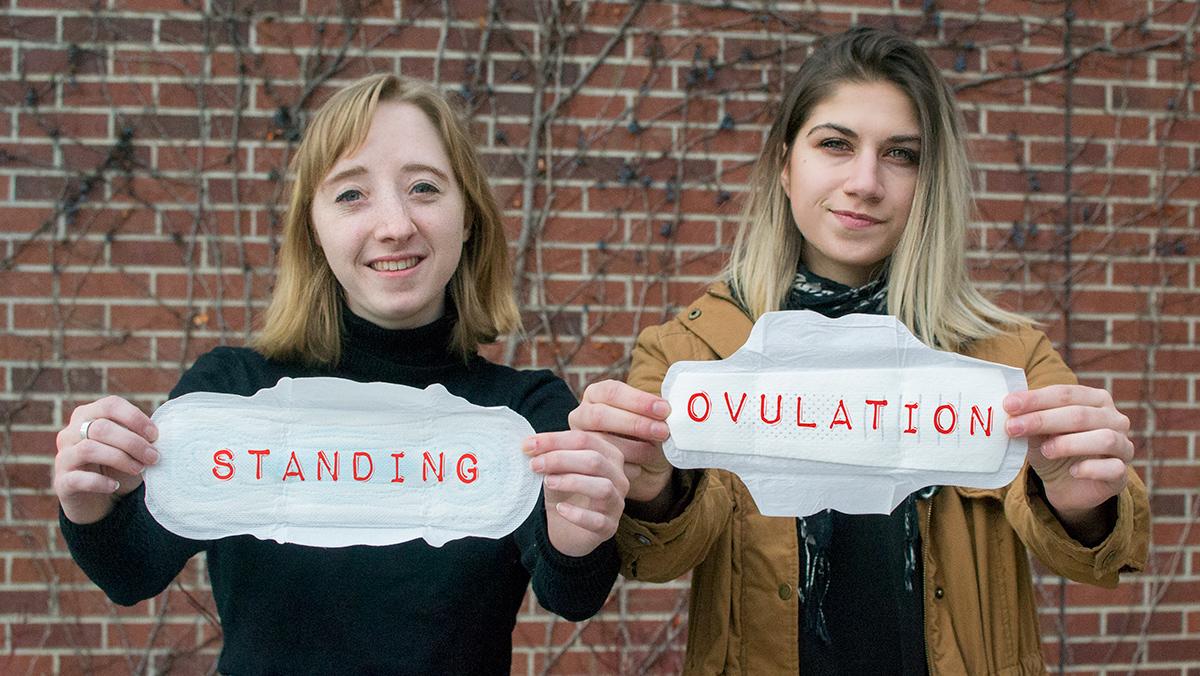 Women’s periods are sometimes seen as a taboo topic — one that is silently acknowledged but hardly ever openly discussed. But two Ithaca College students are working to end the stigma around menstruation. Sophomores Nicole Marino and Gianna Folz are brand ambassadors for the company THINX, a feminine–hygiene company that makes period-proof underwear that can be an alternative to traditional tampons or pads.

As brand ambassadors at the college, Marino and Folz have formed the group Standing Ovulation with the goal of destigmatizing menstruation. The two founded the group in August and have hosted events promoting period positivity, such as a poetry slam. Standing Ovulation’s next event involves collecting unused menstrual hygiene products from students on campus and donating the items to the Ithaca Rescue Mission for low-income women.

Opinion Editor Celisa Calacal spoke to Marino and Folz about period-proof underwear, the taboos around menstruation and what people misunderstand about periods.

This interview has been edited for length and clarity. Calacal interviewed Marino and Folz separately, and their answers have been combined below.

Celisa Calacal: How did Standing Ovulation get started?

Nicole Marino: Standing Ovulation was started between me and Gianna Folz. We were hired by the company THINX, and they wanted brand ambassadors for their company. So we were hired by them to come to the school and talk about feminism and period positivity with college students and promote that through the community and just let people [be] aware of what THINX does — what their company does, what their outreach programs are.

CC: What topics do you talk about as brand ambassadors?

NM: We host an event every month. So we’ve done two on campus so far. We screened the film “The Week,” which was put together by THINX. And then we had a huge discussion afterward, which was really exciting because there are all these people in the room, and they finally got to talk about their periods in an open space. And everyone was excited, and we were laughing. And it was really incredible to actually have a space to talk about that because in most spaces, that’s something uncomfortable. That’s something that you don’t discuss. And then the other event we’ve done so far is we hosted a poetry slam down at the Kava Bar downtown, and we had almost — at least 200 people come. And we’re actually going to put together another one of those I think in March in response to the Women’s March and the election. It’s going to be our “get angry” poetry slam. … And we have donation boxes that we’re putting out right now for menstrual hygiene products, and that’s going to go to the Rescue Mission downtown.

CC: So the donations to The Rescue Mission would go to low-income women who can’t afford menstrual hygiene products?

NM: Yeah. So that’s a huge issue with women of low income and women who are homeless, is that any money they have is really going toward food and going toward making sure they’re safe. And since menstrual products are often taxed and so expensive, it’s really difficult for them to get access to that. So it’s a huge issue, especially in big cities, and it is still an issue in Ithaca, so that’s something we want to address because everyone — women — definitely deserve to have access to that.

CC: Why do you think periods are so hard to talk about?

NM: We were raised to think it’s not appropriate to talk about. And especially when we were in middle school and we had the talks where the teacher’s like, “The boys have to go in the other room.” And they couldn’t hear about it, which is really awful because now you talk to guys, and they don’t know anything about periods. And they’re like, “Oh, well, can’t you just hold it?” They don’t understand it, and that makes the whole issue even worse because then it’s hard for us to really make it something that should be public and should be able to be talked about.

Gianna Folz: I feel like that answer goes back hundreds of years. … The primary people in charge were men up until very recently in a lot of different societies — and sometimes still, men are in power. And I think that when there is a women’s issue, it’s harder to talk about. There’s more of a problem with speaking about it than the primary people in power.

CC: What are your thoughts on how we tax menstrual hygiene products?

NM: Well according to the government, tampons are considered a luxury product, which is completely absurd because the people who are putting the tax on it have never worn a tampon in their life. So I don’t know how they would understand if it’s a luxury or not.

GF: I think it’s completely unfair and unjust. Obviously, I think that the menstruation hygiene business profits so much. And having other ways to get hygiene products like diva cups, menstrual cups or underwear, like that is so helpful because not only do you save a lot of money in the long run … it’s also extremely environmentally friendly compared to those, too. You’re not wasting as much paper with the underwear.

CC: What do you think is the most misunderstood thing about periods?

NM: I think along the lines of trying new things and trying to figure out what works best for you. And I think that’s really important now, especially with all the environmental issues we’re having because tampons and pads contribute so much waste to landfills that there are alternatives. Menstrual cups have been around for at least 30 years now, and THINX is coming out with period underwear now, and those are all much better environmental solutions. But most women are nervous about trying new things just because a lot of women don’t really have anyone to really talk to about it. So it’s hard to add new, very intimate routines into your life like that when you don’t have a support group.

GF: Well, in different societies, there are different taboos around periods. In America, it’s more just, “Don’t talk about it. It’s gross.” Girls will have to hide tampons up their sleeve or in their jacket like oh, if they want to go to the bathroom, they don’t want people to see it. … In some places in India, some women who are menstruating can’t go into the kitchen and cook, or they have to be isolated from the rest of the group. And that’s just completely insane because people need to know that it’s not a sin. It’s not disgusting. It’s not something you should be ashamed of or guilty about. And I think that’s what we’re trying to tackle actually in some of our events, especially the first event where we just had a conversation, a free conversation about our periods and how natural it is.