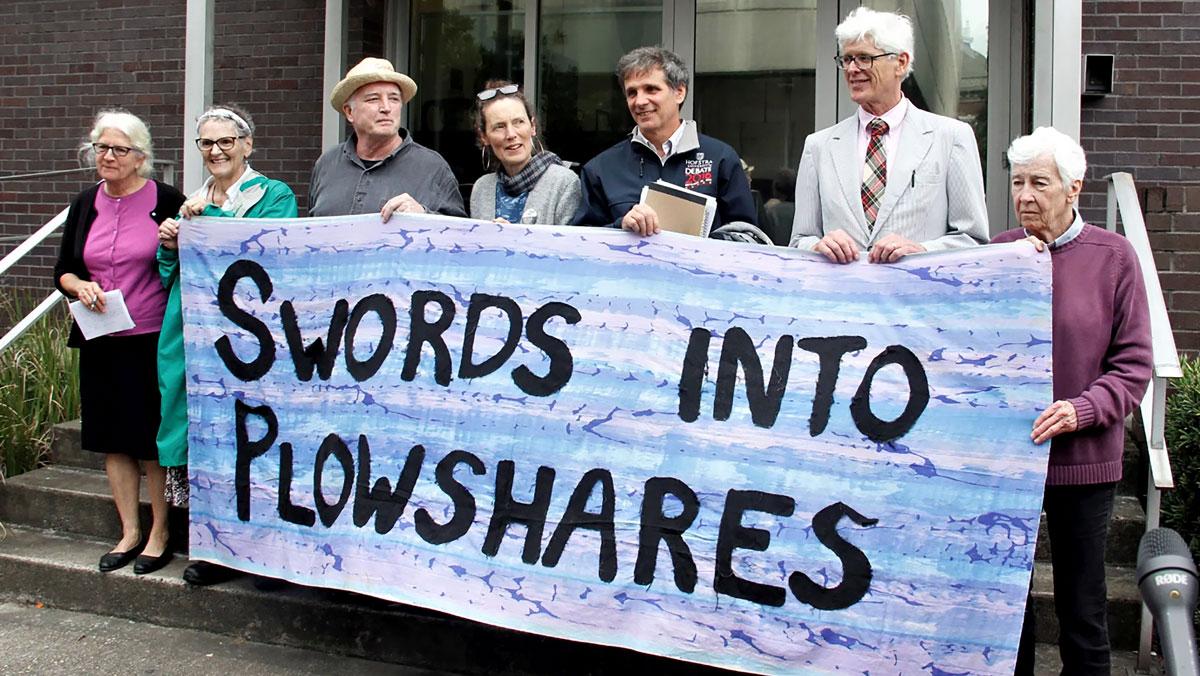 Photo courtesy of Garry Thomas
Six of the seven Kings Bay Plowshare 7 defendants stand with a banner after being found guilty Oct. 24 in Brunswick, GA. Garry Thomas, an Ithaca resident and professor emeritus of anthropology at Ithaca College, reported on the trial for Ithaca news outlets.
By Brontë Cook
Published: November 13, 2019

Garry Thomas, an Ithaca resident and professor emeritus of anthropology at Ithaca College, spent the month of October in Brunswick, Georgia, reporting on the trial of the King Bay Plowshares 7 as a correspondent for The Ithaca Voice and WRFI Community Radio News. The King Bay Plowshares 7, a group of anti-nuclear activists, were found guilty of conspiracy, destruction and “depredation” of government property and trespassing after conducting a demonstration at the Kings Bay Naval Base where the Trident nuclear missile system is stored. Among them was longtime Ithaca resident Clare Grady.

Opinion editor Brontë Cook spoke with Thomas about his coverage of the trial, how his background as an anthropologist informed his reporting and his personal relationship with activism.

Brontë Cook: So, first, tell me about the case.

Garry Thomas: There have been Plowshares actions at military installations since 1980 at least. … These are groups very often dominated by Catholic workers scattered all over the country with actions at draft boards, recruiting centers, defense installations and atomic weapons manufacturers. This particular group of Plowshares 7, the Kingsbay Plowshares 7, entered a naval base on the coast of Georgia, cut their way through a chain link fence, crossed a sort of a no persons area … through another fence and then split up into two different places. … One of the participants, Clare Grady, whom I’ve known since she was a teenager, went with two or three others, … poured blood, human blood … on the building. [They] wrote peace and anti-war messages, biblical passages on the sidewalk leading up to this administration building. … The other group that went through this fence went to a monument of miniature Trident missiles. … They hammered on these missiles, took a grinder and tried to cut their way into these missiles, … poured blood, … wrote messages … and hung around long enough — two or three hours — to get arrested. And that was the plan, the expectation. They wanted to be able to make a statement. They want it to be able to educate the American people … and with every expectation of going to trial.

BC: You attended the trial as a pro bono reporter for The Ithaca Voice and WRFI Community Radio News. Tell me more about that.

GT: I planned to go anyway. … I was talking to the editor of The Ithaca Voice because … in the almost 18 months, let’s say, between the action and the trial, I’d arranged for interviews with Clare Grady, the Ithaca resident. So I established a relationship with The Ithaca Voice. And [the editor] said, “How would you feel about reporting on this trial?” … Eventually, I said, “I’d like to be a correspondent. … I’m not a journalist, but you can figure out what kind of role you want to give me.” … I latched onto this idea of writing letters as opposed to reports. … Then she grabbed onto this idea that we could report to WRFI as well.

BC: What was it like translating your skills as an activist and an anthropologist into journalism?

GT: So I told [The Ithaca Voice editor] that … I didn’t think was right for me to be there as a reporter. She spoke to me about fairness and bias, and I said, “You know that I have a point of view.” I said that I would try to be fair. I would not try to misrepresent the prosecution or the government’s case, … but obviously I felt that I was in a fairly unique position. … I have known Clare Grady since she was a teenager, so that would be about 45 years now, and I had been so involved in the movement. So I said, “I’m going to write with a point of view.” … I latched onto this idea of writing letters as opposed to reports. … Journalists and anthropologists both need to consider whom to choose to interview, how to establish rapport. … I was very aware that I was in another culture, and, like journalists, I wanted to be sensitive to cultural differences. We both want to be fair and accurate. … A big difference for me was dealing with deadlines. I called into WRFI to record every night at 10 and was constantly writing final copy for them and for The Ithaca Voice. Anthropologists have the luxury of time. Reporters don’t.

BC: You were reporting on this trial as a journalist, but also a longtime friend of one of the accused. How was that for you?

GT: Well, actually I was planning to go as a supporter and friend and not have this nice press credential hanging around my neck. The fact that I had the press credential and a couple of different roles dealing with radio and newspaper really changed my experience dramatically and for the better. I can use the word “adrenaline rush” for having deadlines, for having to crank out the verdict and the accounts that I did. I think that I got a lot more out of being there by being in the dual role that I was. On the first day, the courtroom was filled with prospective jurors, and there were only places for five journalists to sit on a bench that was called the “journalists’ bench.” And I got one of those seats. So there was a real privilege, I’d say, attached to this role. … I think that I, easier than probably almost any other journalists in the room, was able to focus on [the Grady family]. … I’ve been very much involved in this case emotionally ever since I made my first “Letters from Georgia” post. I felt that my mission, when people are asking me what I want to do in retirement — I wanted to free Clare Grady. So that emotion was there.

BC: The jury reached a verdict. What now?

GT: It’s not over. I was with an exceptional group of people. I’m talking about supporters, but I’m also talking about the seven defendants. … One of them came out the day before the verdict, but he knew which way the verdict was going to go, and he came out and said, “We won.” And he thrust his hands up in the air, “We won.” And what he meant was that this is getting a peace movement restarted. Another [defendant] said, looking at 20 years in jail and a father of eight, “I didn’t come down here to get a hung jury. I didn’t come down here to get an acquittal. I came here to speak truth to power.”

The “Letters from Georgia” series and coverage of the trial are available online at ithacavoice.com.