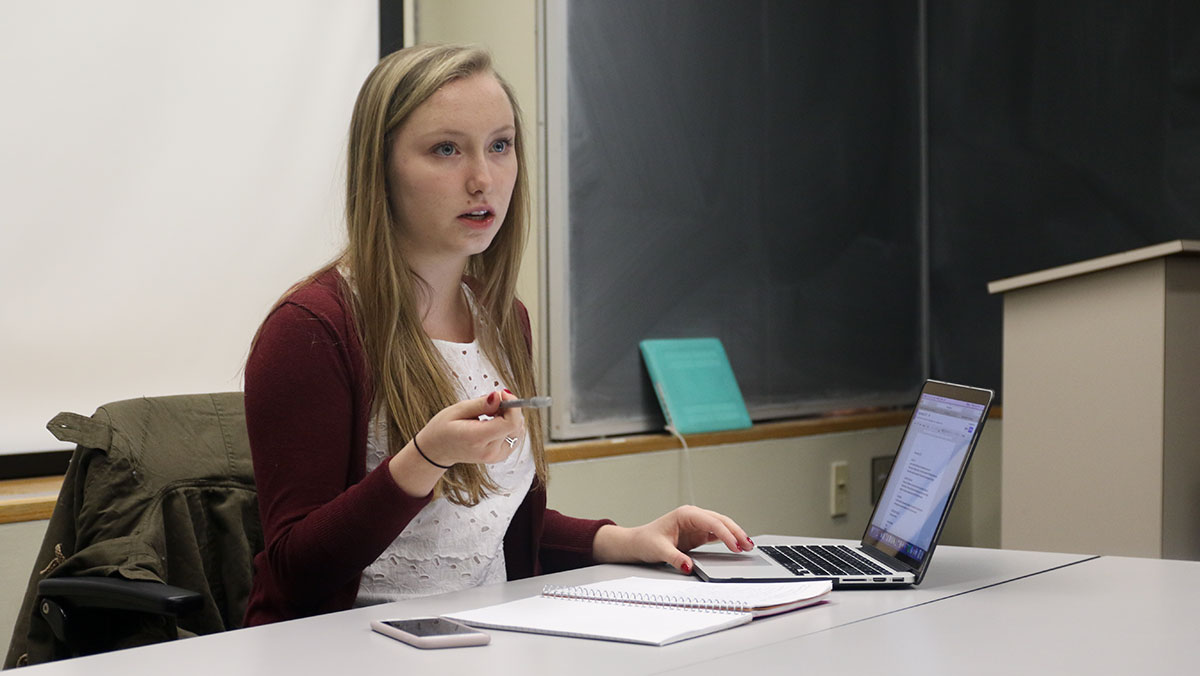 As the Roy H. Park School of Communications wraps up its first Women in Media Month, one of its core organizers, sophomore Katie Baldwin, acknowledges that there is room for growth.

Baldwin, president of IC Women in Communications, worked with the leaders of two other organizations, The Studio and Women Empowered, to assist Diane Gayeski, dean of the Park School, in planning the series of events.

Opinion Editor Kayla Dwyer spoke with Baldwin about key issues that emerged from the month, including female representation in media, theories on how to effect change and her vision for future events.

Kayla Dwyer: We talk about the discrepancy between female representation in media versus in college. Where do you think the responsibility lies to change these numbers, and how do you navigate this issue without sounding sexist or simply blaming the patriarchy?

Katie Baldwin: We talked a lot about how it’s everybody’s problem — it’s a man’s problem, it’s a woman’s problem, it’s a societal problem, which it truthfully is — but we were also talking about kids and what we instill in them from day one. Kids watch programming on television, and they see moms cooking and cleaning, and they see dads going to work. That was one of the main things we talked about with children and how are we presenting media to kids and the younger generation. We have the ability to fix what’s up ahead with them. … As a kid, you don’t know anything until the media has an influence on you. As content creators, which was a main part of the minicourse, it’s very important to make sure that we’re relaying a message that has a positive impact on people. I think one of those positive impacts is making sure that kids understand that society has to be equal.

KD: The common theme is that men and women both have this responsibility. No doubt, though, most of the audiences in these events have been composed of women. How do you reconcile this?

KB: It was difficult — there was one male in the minicourse. We would look at him for answers; we would look at him for his perspective. One of the most important things that we talked about in the class is that it is everybody’s problem. This is something that does affect everybody else. He actually had a really good point: He said, “I grew up with a single mom and a sister, and I never understood why women were treated unequally.” Because his mom raised him and she could do everything he thought a man could do, which she could.

KD: So you’re saying part of reconciling this is to actively engage the men who do participate and hear their perspectives?

KD: I’m sure you’ve heard of Sheryl Sandberg’s concept of “leaning in.” Did that play into Women in Media Month at all? How do you view this message?

KB: We didn’t talk about it in the minicourse, really. What we talked about over the course of the month and the planning of it all was really just gender inequality. I think it’s much more than just “leaning in,” as she calls it, but I think it’s a problem that affects everybody. It’s something that we all need to fix, rather than just females, and I think her book is geared toward what we can do as women. … We have to have films that get put out there that have all female leads and female directors, but have mixed–gender crews that are equally as possible as superhero films that have all men in it.

KD: How would you evaluate the success of the month?

KB: I thought it was very successful. I think that we could’ve had more participation from males. What was interesting is when we were tabling for the minicourse, guys would come up to me and be like, “Isn’t this only for women?” And I would be like, “No, that’s the problem!” This is not just a female course. This is something that’s very important for everybody. I think that females got it, that this is something that really needs to happen, that this whole month is great publicity for the cause.

KD: Do you have a particular vision for next year?

KB: I would definitely broaden it to the entire campus. We had a girl in the minicourse from the gerontology major, and she had just as much to say about women behind the scenes in media as any of us did, even though we study it. So I think that it could be something that’s very beneficial to everybody. I also think that we could partner up with more organizations on campus because I think there’s a lot of other people that would really be interested in this. We tried to publicize it as much as we could, but I think every year, if we make it an annual thing, it will just become part of March and what happens in March.