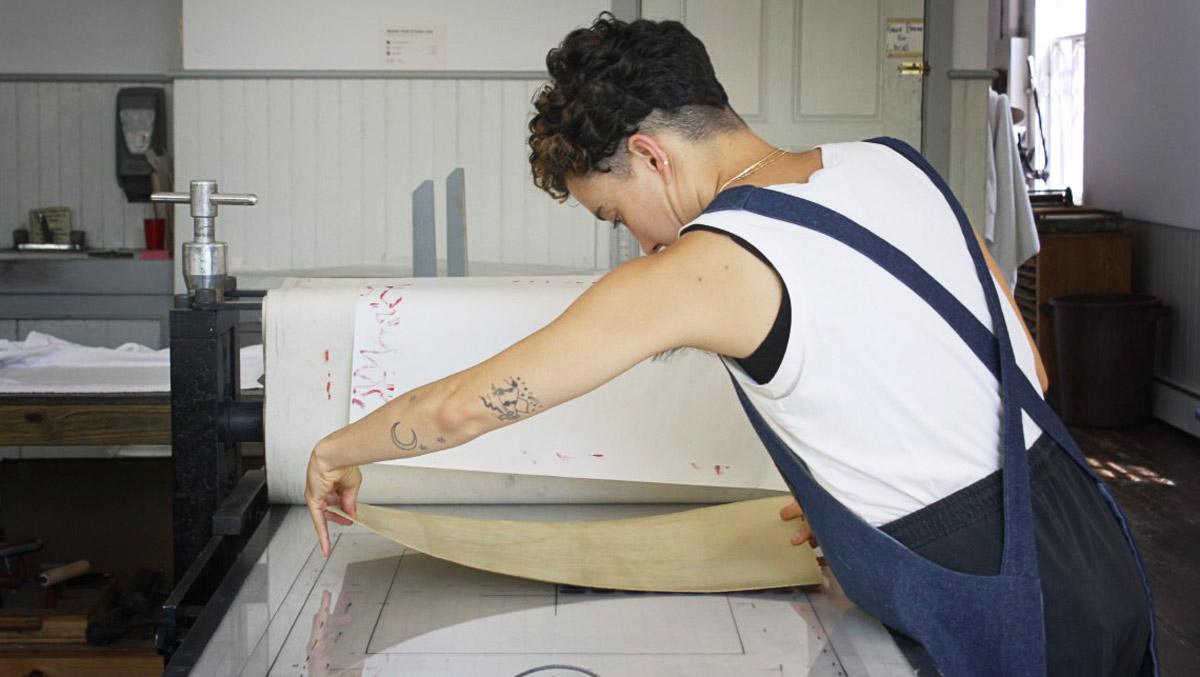 Courtesy of Paloma Barhaugh-Bordas
Paloma Barhaugh-Bordas creates a monoprint that went into the exhibition at Buffalo Arts Studio. She produced much of that work as an artist in residence at Women’s Studio Workshop this summer. Monoprinting is a process of transferring an image to paper using a printing press, and it has a painting-like quality.
By Brontë Cook
Published: October 9, 2019

Paloma Barhaugh-Bordas, assistant professor in the Department of Art, recently opened a solo show at Buffalo Arts Studio. The show, titled “Understory,” explores invasive species, the idea of containment and the concept of home.

Opinion Editor Brontë Cook spoke to Barhaugh-Bordas about the show, her recent move to Ithaca and her lifelong relationship with art.

Brontë Cook: You recently opened a solo show in Buffalo, New York. Do you want to tell me about that?

Paloma Barhaugh-Bordas: It was a solo show at Buffalo Art Studio. It opened last Friday and will be open until Nov. 2. I was invited to do it over 18 months ago. They have two galleries there, so the artists are often paired, although they’re still solo exhibitions. …

The work I made I have been developing over the summer. I did two artist’s residences in the state of New York: one in Rosedale at Women’s Studio Workshop, the other at Alfred University. It was work that was new, so it made me a little nervous to show all of it. There’s always that question of, “Am I putting in the right things? Have I had long enough to digest them?” But I kind of went for it. It was about invasive species, the ideas of containment, being contained as a both pleasurable and confining experience … and trying to find home through understanding plants and what lives around you.

BC: What drew you to that topic?

PBB: Artists often draw from their … history and stories. On my mother’s side, I’m first–generation American from Nicaragua. On my father’s side, it’s maybe like third– and fourth– generation from Norway. So aside from being kind of new in place and not having ancestral lands, I also have moved a lot for my work in academic environments, and I’m always trying to find home.

One of the things that has made home for me is these indoor plants that I take to across state lines. It’s a different kind of relationship with nature, but it’s one that has become mobile with me. So I thought about my plants and how they’re not necessarily aggressive invasive species, but they certainly don’t belong in the places where I put them. … Then I also started thinking about that term “invasive species.” I think under the influence of some of the conversation about building a wall between here and Mexico. … Sometimes we talk about plants in ways that are very human. That’s actually happened for a long time.

BC: What is your personal relationship with art?

PBB: I just moved to Ithaca to start this job — it’s going great so far. I was in Rochester before. … Prior to that, I was chasing my MFA and first jobs in Virginia and Rhode Island. And so really since I was 18, I haven’t lived in one place for longer than four years, so I’m excited to be in a little bit more of a permanent — potentially permanent — place. I’ve always loved art, although I love to tell my students in particular that I failed IB art in high school. … When I got into grad school, I was like, “Yeah, you know, I’m actually totally an artist.” It’s a really funny situation.

Then, in college, I literally took printmaking because all the … seemingly interesting creative types were taking printmaking. So I did, and then I took it as much as I could after that.

With printmaking, you can make multiples. You can distribute them in ways that are either economically tied or politically tied, … emotionally and romantically tied. There’s so many more options with how people get hold of it, and I love that about it. So that’s the medium I’ve been working in and that I’ve trained in. But I also like drawing fabric and textiles, and I’ve been trying to use a little bit of that in my practice, which is really fun.

BC: Why do you think it’s important to have artistic outlets and share art with other people?

PBB: That’s a great question. It’s funny because, on one hand, it’s hard for me to understand that people don’t appreciate art. It’s just a little beyond me. Even family members of mine don’t necessarily understand why it’s valuable. … That’s why it gets a little interesting because they’re creative people. Whether it’s woodworking or quilting or writing … or the way they present, all of those parts of their lives are very creative, … but they won’t necessarily [understand] sculpture or … performance art.

I do work with so many students that are non-majors. Those are the kind of students that I think do have a small bit of an art impulse. … What I enjoy most about being in a classroom is helping each student see that they have an independent ability to create things. So I spend a lot of time asking them what they’re interested in or why. Right? … So in terms of people finding what it is that really motivates them, I think it’s transferable skill. Not everybody is going to be creative in the same way.

BC: Is this your first solo gallery? And will you bring any of your art to Ithaca?

PBB: It is not the first time I’ve had a solo exhibition, but it is the biggest space that I’ve had to fill, and it’s maybe one of the more experimental shows that I’ve tried. I haven’t said that out loud yet, so that’s pretty exciting. I tried some new things. I had pedestals built for me thinking that I really wanted to try getting bodies more involved with two-dimensional work. So I had these pedestals made that looked like tables, but they were really low so that people had to really look over the prints and interact with them in a way that you don’t usually move your body like that to look at things.

I haven’t had a show in Ithaca yet, which is exciting. I’m really impressed with the art that comes through here and happy to have it in my backyard. I’m going to get to know some of the galleries around town and see what’s happening with the art community.