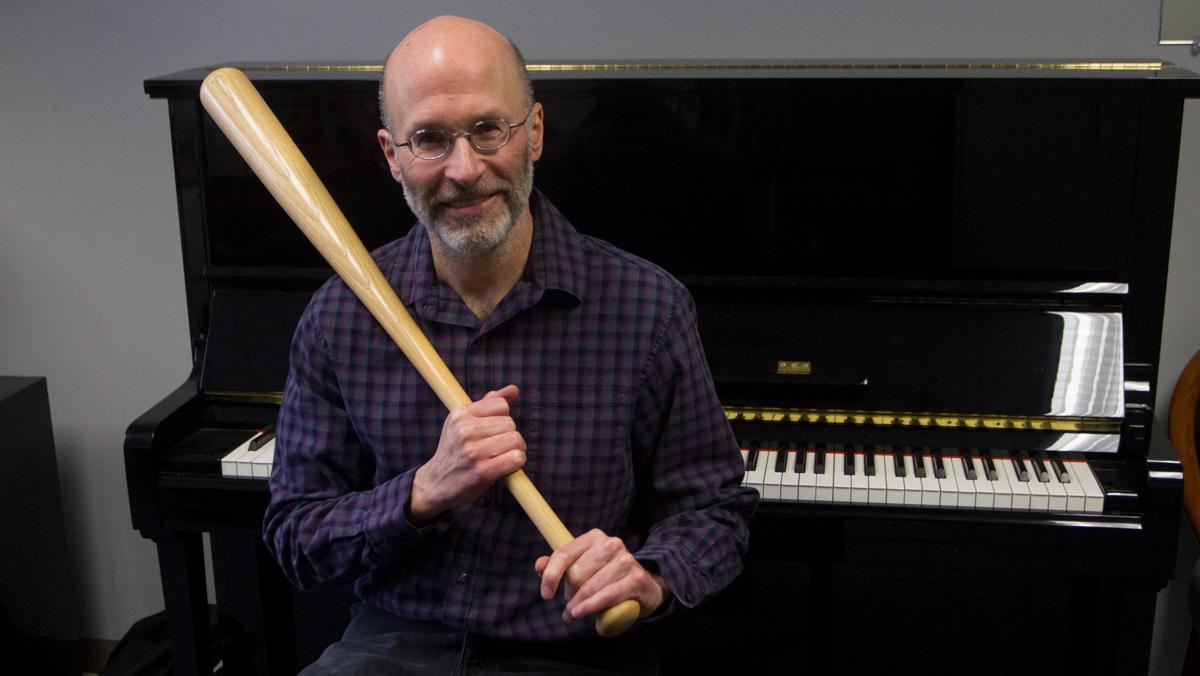 Maxine Hansford/The Ithacan
Timothy Johnson, professor in the Department of Music History, Theory and Composition, presented on his research in music and sports.
By Meaghan McElroy — Opinion Editor
Published: March 7, 2018

Timothy Johnson, professor and chair of the Department of Music History, Theory and Composition, gave a presentation March 3 at the Public Music Discourse: In Honor of the Bernstein Centenary at the University of South Carolina. His presentation was entitled “A Music Theorist in the Baseball Hall of Fame? Talking Music to Baseball Enthusiasts.”

Opinion Editor Meaghan McElroy spoke to Johnson about his career path, his presentation and the relationship between music and baseball.

Meaghan McElroy: Where did your interest in the relationship between baseball and music come from?

Timothy Johnson: I’ve liked both music and baseball for most of my life, and the combination of my field started with Charles Ives, who’s an American composer from the first half of the 20th century. He had some music about baseball in his work, and I became interested in that. I ended up writing a book about Charles Ives’ music and baseball and gave some talks at the Baseball Hall of Fame about that subject. That book won an award from the Society for American Baseball Research and the Sporting News, and I also spoke at their conference about it, as well as some other conferences. That led me to do more baseball music research.

MM: When you started your career, is this what you set out to do?

TJ: Oh, no, it’s something I came upon, and it’s not the only thing I do. It’s one of the research areas I have. My dissertation was on John Adams; he was an American composer. I’d always thought it’d be nice to do something with Ives because I’ve liked Ives since high school, but I didn’t really do any studies of Ives until the early ’90s, I guess. I wrote an article about some of his songs — because he wrote over 150 songs — and this wasn’t about baseball. It was just about music theory, which is what I do. When I started into the Charles Ives baseball stuff, I thought I’d write an article about him, and it turned into a book, so that surprised me. But it’s become one of the three main things I do, all of which it turns out are about music and its relationship with other fields.

MM: At the conference this weekend, did you just present on your past work?

TJ: It was kind of like an outline. This was an audience of music scholars, so it was telling them, “This is how I’ve been able to engage with these audiences, what I was able to focus on.” With each [presentation I’ve given], it’s been different [topic] — like sketch studies, which are pretty obscure. … And then it’s been the different ways I’ve done analysis over the years [and] explaining how I am being true to my own scholarly pursuits while talking to public audiences, and then some of it was just kind of rehashing. I was going over seven of my presentations in 20 minutes, so it was quick, but I just gave a basic idea of what I’ve done.

MM: Are baseball fans typically interested in music research? Is there a niche in that group?

TJ: Yes. My presentations that I’ve given at the Hall of Fame — for people that go to this conference, often they always want to come to it because they like it. I think the first one I gave, there weren’t very many people, but the audiences have gotten bigger. … Sometimes, I go to the conference when I’m not giving a talk and I’ll run into people and they’ll mention, “Oh, I remember you making us sing those songs.” I make them stand up and sing to illustrate “Take Me Out to the Ball Game,” “God Bless America,” and “The Star–Spangled Banner.” If we’re doing those songs, you have to stand up and sing with me. They really seem to enjoy that.

MM: Why do you think there is such a connection between baseball and music?TJ: I think there’s a connection between music and everything. All sports have music involved. There’s an article I didn’t write, but it’s about Mike Tyson and the music that he walked out to. I bet if you go out to the ballpark, even here, that they’ll have walkout music they use, and so do wrestlers. Music is just such a part of our lives. If you walk around campus, people have earbuds and they’re listening to music. Music is all around.

While composer John Adams’ opera “Nixon in China” has been a theater favorite for more than 25 years, Timothy Johnson, associate professor of music theory, composition and history, is giving the old notes a new tune.