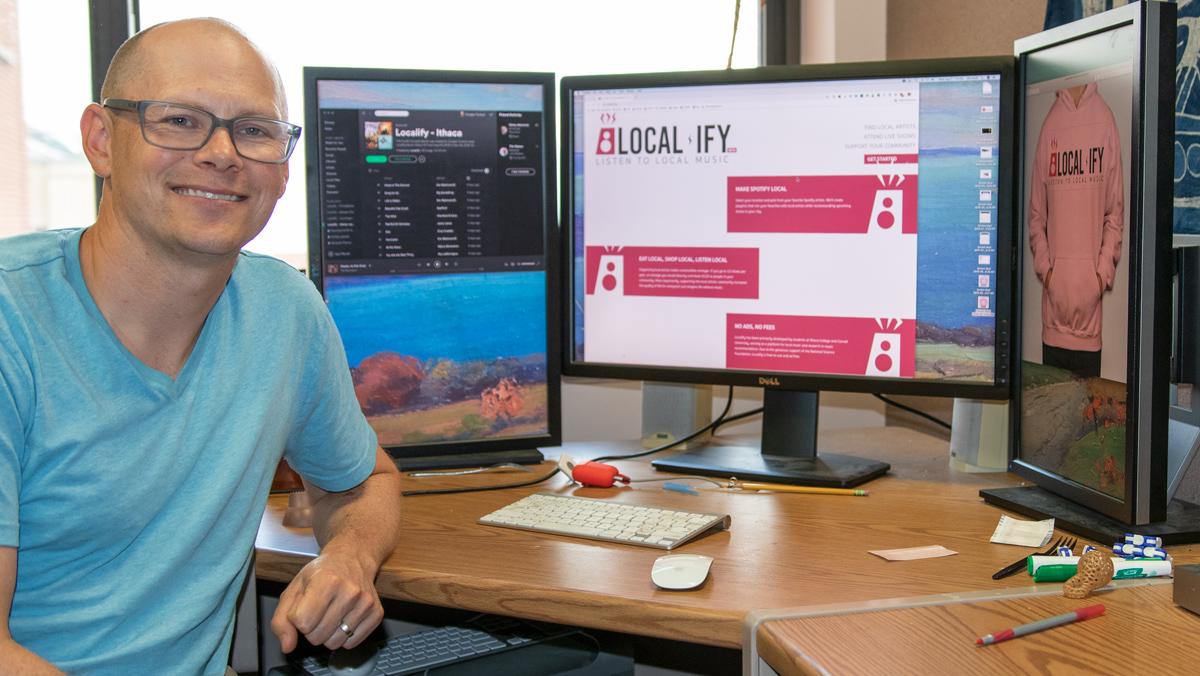 Doug Turnbull, associate professor in the Department of Computer Science at Ithaca College, spent the summer working with a group of students to create Localify, a web app designed to help people discover local artists. The app monitors a user’s Spotify account and uses their “heavy rotation artists” to recommend local events and to send them weekly email updates on the latest local tunes.

Opinion Editor Brontë Cook spoke with Turnbull about the app, his inspiration and the impact he hopes it will have on the community.

Brontë Cook: What is Localify?

Doug Turnbull: It’s a web app, a personalized weekly email and a Spotify playlist generator that connects your heavy rotation artists on Spotify with artists playing shows in the local community. That community could be anywhere in the country or in Canada. … The playlist that we generate is based on your heavy rotation artists … so you have music that you like and then music that is maybe strange or unfamiliar at first. Research in music psychology shows that if you are exposed to music, you’re more likely to like it over time, so then you realize maybe there’s a lot of great musicians sort of all around us. … And if we learn to appreciate their music more, we will be more willing to go to their shows and support local venues and make it more possible for local artists to subsist off of the community.

BC: What’s the difference between a web app and a mobile app, and how does it affect Localify?

DT: There are things called native mobile apps, and there are also web mobile apps — we’re a web mobile app. … It’s not something you need to go to the app store and download. You can go on your mobile browser like Safari or Chrome and just go to the URL. You might go once and set up your Localify account. … You set that up, then you just kind of walk away from it. You can see the event recommendations, so you might come back to it to look at that, but you might also use the weekly email digest, which is personalized to you, and listen to the Spotify playlist that updates every Wednesday for you. Spotify does “New Music Mondays” and “Throwback Thursdays” — we’re trying to do “Local Music Wednesdays.”

BC: This is a collaboration with you and some of your students. … Tell me more about that.

DT: The best part about Ithaca College is that we have many students with orthogonal skill sets, which means we have students in Park that are good at designing interactive experiences, students that are good at advertising and branding. We have students in computer science that are excellent programmers and can build apps that are intricate, so they can connect to apps like Spotify. … You know, everyone has a role to play. It’s like coaching a team. I write the grants, do some of the coding … [and] make sure everyone is communicating. But everyone is responsible for a part of it, and it only works if they all step up and do their job, and they have been really responsive. This summer has been one of the most productive summers at producing something end to end that we’ve ever had.

BC: When did Localify launch?

DT: At the beginning of August, we had sort of a quiet launch and had friends and family test it out. … We’ve done some user testing, and we’re hoping to sort of have a more public launch at the beginning of the school year internally at Ithaca College and in the City of Ithaca. That’ll give us some time to work out bugs and things that aren’t correct, but, really, you can use it anywhere in the country. We’ve been toying around with the idea of not doing paid advertising and hopefully letting it go word of mouth. … We’re sort of committed to this being a community project. … After this fall, we will see where we’re at.

BC: What are your hopes for what it will do locally?

DT: I grew up in Ithaca. I played music in Ithaca. … Participating in art is really good for quality of life. Every study shows that playing music and participating in the local community adds a lot for the individual who is playing but also to the people who are watching. By supporting other small artists, having that become a lifestyle for people, that would be really great — to have people appreciate and value local music, especially in this day and age where a lot of people feel like music has lost a lot of its value due to streaming. … In Ithaca in particular, we have a very local-centric community, … and we have a lot of artists. Ithaca is a special place because we value those things, but not every place in the country values those same things. So getting the idea that people should be spending time listening to local music is maybe just as important as supporting local businesses or eating from local farms. … Creating that advocacy for local art is the overarching philosophy behind the project.