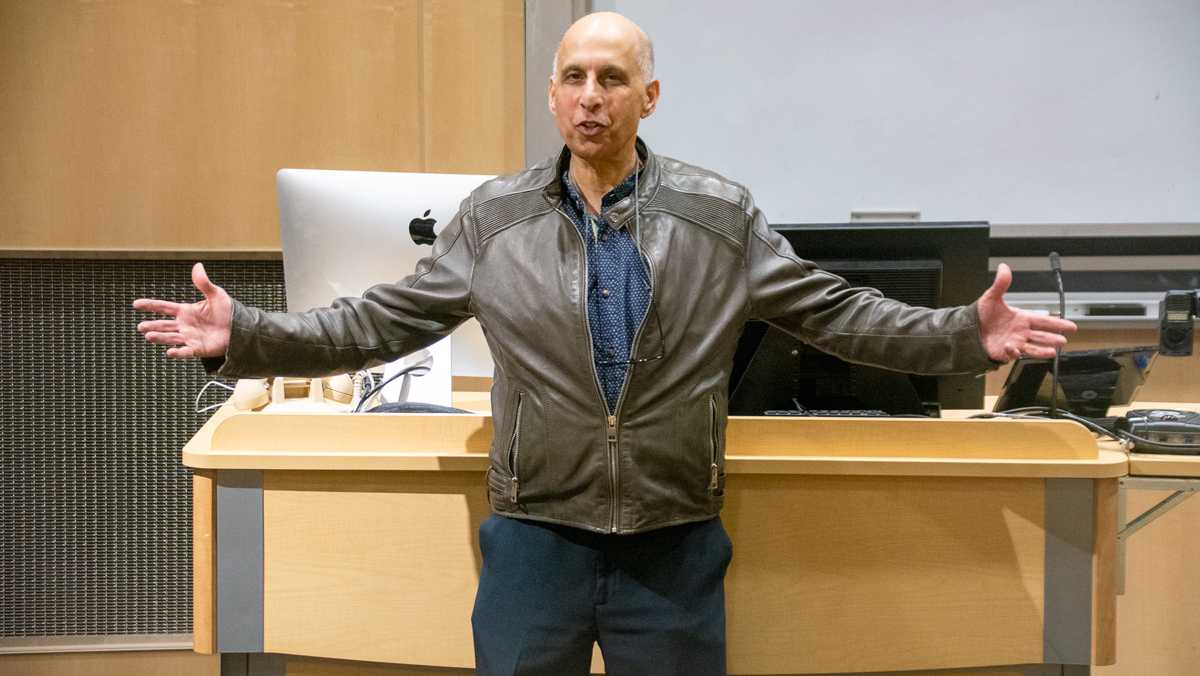 Brooke Bernhardt/The Ithacan
Naeem Inayatullah, professor in the Department of Politics, is interested in a form of pedagogy that prioritizes student conversation over material comprehension.
By Kate Sustick
Published: March 4, 2020

Naeem Inayatullah, professor in the Department of Politics at Ithaca College, published a paper in February titled “Pupils Dilated: Towards a Pedagogy of Emergence.” The paper pushes readers to see a different method of pedagogy that is focused on developing interpersonal connections.

The paper comes from a larger book he is writing that is currently in the works, titled “At the Cost of All Else: A Pedagogy of Emergence.” The paper was presented at the workshop “Subversive Pedagogies: Radical Possibility in the Academy” Feb. 10–11 at Victoria University of Wellington in Wellington, New Zealand.

Opinion editor Kate Sustick spoke with Inayatullah about his interest in looking at research holistically, the humane in global economics and proposing pedagogy that is more directed toward human connection.

Kate Sustick: Why is looking at the political and social so important to your research of economics and its histories?

Naeem Inayatullah: I did a master’s in agricultural economics from Michigan State University. The question that I asked myself there was, “Why is there international inequality?” My training there was in neoclassical economics, and you get a lot of models, and I couldn’t find the answers to the questions I was looking for in those theoretical models. And it took me many years later to figure out why it is that I wasn’t able to find what I was looking for. … There wasn’t the kind of critical consciousness that I was looking for — something that would help me actually understand why there is disparity. Neoclassical economics does have answers for that, but the answers are usually based on unit. … I wanted something that was more systematic than that, something that was more holistic.

KS: What shifted your interest from political economy to pedagogy?

NI: The short answer to your question is that there wasn’t really a transition. I was thinking about teaching the whole time. It’s the primary thing that we do [as professors]. The first thing I had to recognize was that I had to meet [students] where they are. The only way to meet them where they are is to learn where they are. The only way to learn where they are is to get to know them. That very slowly started to shift my style from lecturing gradually to discussion orientation. In order to get them to understand the global political economy, I needed to understand why they weren’t getting what I was teaching, and in order to do that, I had to figure out what was going on with them. As that process unfolded, what I came to is that they are not interested in my project. … It’s sad for a moment. But it’s a great revelation because it leads to the pedagogy and leads to the paper we are talking about. If students learn, they learn what they want to learn. They learn what they are ready to learn. They learn what their project already is. So as I began to give up on the possibility that they would learn anything about international inequality, I began to recognize that they had their own projects. Just like my project is understanding international inequality, they have their own projects. … My job is not to teach them about international inequality because they’re not going to learn that anyway. My job is to figure out what their project is and to get them to unfold their project.

KS: Did you see a difference once you shifted this teaching model?

NI: The classroom space changed. I still don’t think I can get them to focus on what I’ve spent my life focusing on. But I’ve given up on that possibility. What replaces it is that they share aspects of their lives that become windows to me. … They are my classrooms, and I learn about the world by how they see the world. Now in my field of international relations, it’s become faddish to think about pedagogy for the first time. … But now my problem is that I am much further out than most of my colleagues are. Most of my colleagues, when they look at my pedagogical model or practice, they don’t have the best things to say about it.

KS: Why do you think this model of pedagogy is so important to classroom settings?

NI: If you ask my colleagues what their political practice is, they’ll say my political practice is my pedagogical practice. … They bring their political convictions into the classroom hoping to change students, just like I did when I started out. … I don’t think that those kinds of political commitments are productive in the classroom. [My colleagues’] counterargument is, “You don’t have a sense of urgency. How can you just let these people go out and be sexist and racist and classist? You’re not correcting them. You’re not doing your job. You’re being too permissive.” … Let’s imagine you get the perfect student. They’ve actually transformed themselves from being slightly more ignorant students when they walked in as first–year students, and by the time they leave campus, they are much more critically conscious. … We think we’ve made a change in their lives, but we haven’t, and here’s the reasons why. First, students lie. Or they may be totally sincere in their presentation, but 10 years down the road, they’re probably going to go back to their original values. The reason this is going to happen is because it’s not that the students walked in merely being racist, sexist and classist and then you have to show them how to change that. It is that the world itself is racist, sexist and classist, and once they walk out of campus and go back into the real world, they are going to have to make it. … Once they go back into the world, the world’s going to reshape them into being more racist, sexist and classist. … I am teaching when I know that teaching is futile. … I walk into the classroom, and I truly believe that teaching is not possible and that learning is unlikely. Yet I walk into the classroom in order to fail but also because now it is a different kind of space for me. … Here’s what I get out of it: I go in, I get to know them, I get to see the world as they see it. What do they get out of it? They get to learn how other students think.

No one opposes intellectual diversity – that’s the problem. The absence of an opposition suggests something is awry.

Letter to the Editor: “What does diversity mean?”

What is truly missing from intellectually diverse environments are radical and non-Western lines of thinking.