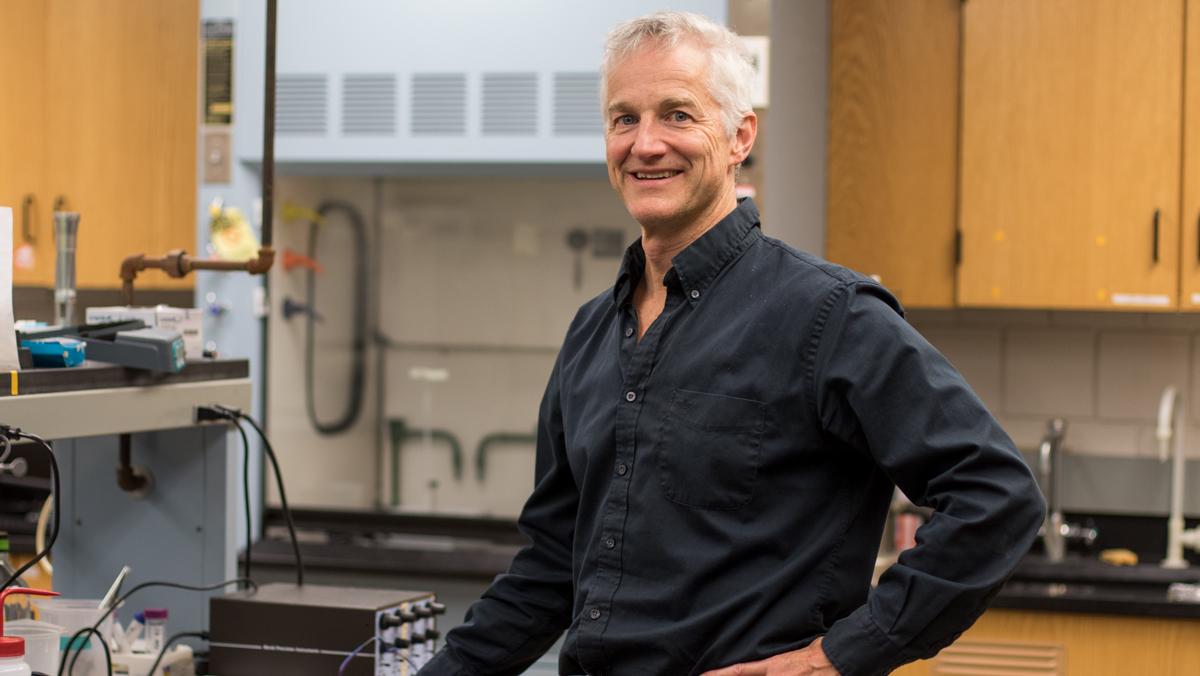 A group of scientists at Harvard University has developed a new medical glue, derived from the research done on slugs in the lab of Andrew Smith, professor in the Department of Biology at Ithaca College. Opinion Editor Meaghan McElroy spoke with Smith about his interest in slugs, the development of the medical glue and what is next for his research lab.

MM: From what I saw, a lot of your work seems to revolve around slugs. Why slugs?

AS: They produce a glue that’s really unusual. I’ve been studying biological adhesives for a while, and I recognized that they produce glue that is a gel. It’s really rare for a gel to be sticky like that. Most gels in the world are slippery — mucus is a gel, it’s slippery, it’s a lubricant that’s pretty much everywhere. To take something like that … and make it into a really powerful adhesive, I knew that that was interesting, and I wanted to figure out why. I thought that that could be useful. Most artificial adhesives are designed to stick to rigid objects and they have to be dry, and to have an adhesive that sticks well to flexible, wet, slippery things is ideal for medical purposes. I knew that that material had to have a lot of potential to guide a medical glue.

MM: Where did your interest first come from to study slugs?

AS: We moved to Ithaca, I found this slug, and it was amazing. It was the first week I moved here and there was one on my back deck. I picked it up and it slimed me. It came off its back and it was oozing — it was like 5 percent of its body mass — and it set within seconds. I got it on my fingers, it set within seconds, my fingers were sticking together — you could pull them apart, but they were really sticking together fairly strongly, and I couldn’t wash it off. I knew instantly that that material was amazing. That’s how I got into studying animals like slugs, and then this particular material.

MM: Your research on that particular slug was used to develop that glue. What was it like to have your research contribute to that development?

AS: Very exciting. That was the goal, that we would guide the development of a glue, and I knew that the slug glue had the properties that we needed for a medical adhesive, and we identified the major principles by which it worked, so I knew it was getting close. We were also trying to make a glue, so when I got the paper that they did it and they made this glue, and saw how good the glue was — I mean, I knew it was going to be good, but wow, it was really good! That was very exciting. All the work that happens in my lab is mostly done by students, undergraduate students, and dozens of dozens of them have contributed to this.

MM: You also made a keynote speech this summer that was about slug glue and hydrogel adhesives. Was that related to this at all?

AS: I talked a lot about how the glue works, what we’ve learned about what makes it so tough, what makes it so sticky and where we’re going. And I’ve given a couple other keynote talks and invited talks like that. We’re doing really good work in this field, it’s a hot area right now. We’re the only people studying biological gels that are glues, but that will change, I think. Now people are going to see the power of this type of gel and the specific structure of this gel that makes it so tough, literally thousands of times tougher than other gels.

MM: So you said that it’s a glue that’s also a gel. What’s the advantage, or what else is out there in comparison?

AS: The slug glue developed by the Harvard group is six times stronger adhesion that the [medical] super glue, and hundreds of times — maybe even thousands of times — stronger than any internal adhesives we have. It’s because it’s a gel, and a tough gel. The trick is making a glue that’s flexible enough to bend and flex with the skin, because if it doesn’t bend and flex it’ll just peel right off. The skin stretches and the glue doesn’t stretch, then they’ve just pulled apart. The trick with these glues is that you can stretch them up to 10 times their length and they still don’t break. All that stretching requires a lot of energy. You keep stretching and stretching and it still doesn’t break, and that means that it’s really unlikely to fail. That’s what makes it so good.

MM: What’s next for you in terms of your research?

AS: Basically, there hasn’t been a medical adhesive that’s been particularly good until now. Now they’ve got this, and this is going to start moving really rapidly, but it still needs to be modified, and I think we’re still gonna keep going on this. Slug glue is biodegradable, and if we figure out how it’s so strong and still biodegradable, that could guide a modification of the [medical] glue to be even better. I suspect that we could modify it to be better for different surfaces. … I want doctors to have a whole variety of different glues for different situations. I want to be on the forefront of that, for glue to be used instead of stitches.

Eastern Towhee, Field Sparrow, Song Sparrow, Indigo Bunting — most people have never heard of these bird species. But if you took the time to search any overgrown pasture, you would find them. Unfortunately, these birds, as well as nearly three-fourth of New York state’s other shrubland bird species, are on the decline.

We have repeatedly been asked, “So, how was China?” since returning from our trips to Beijing, Xi’an and Shanghai.