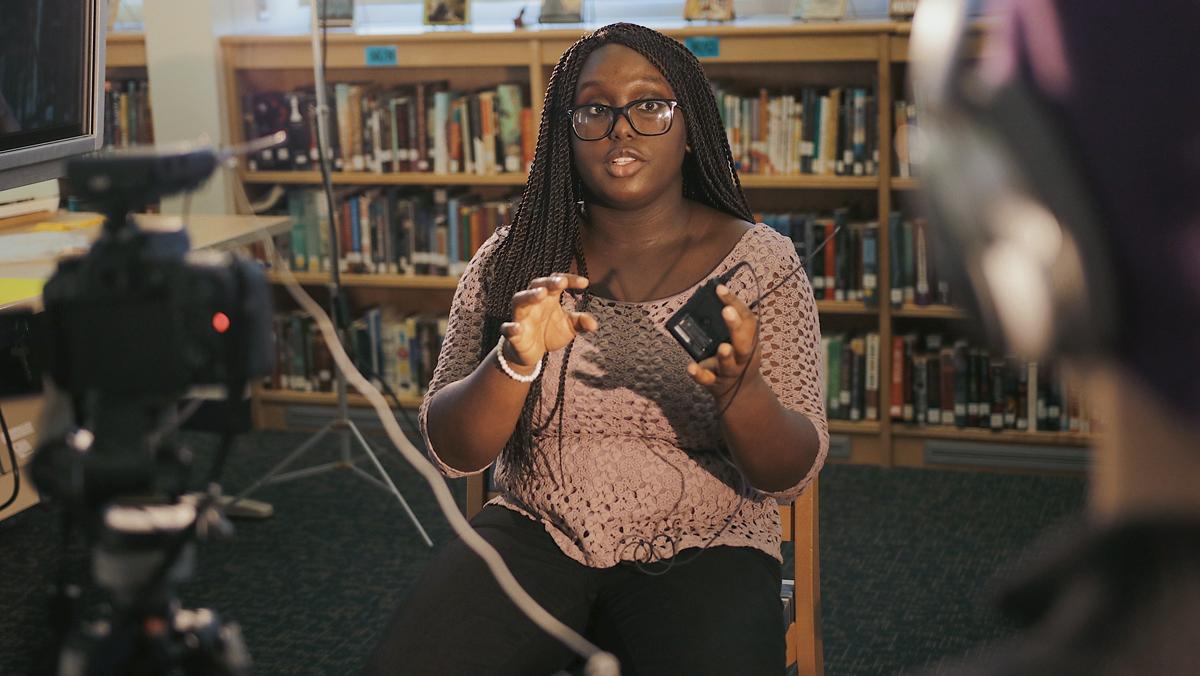 Chloe Gibson/The Ithacan
Junior documentary studies and production major Eden Strachan teaches a course on filmmaking. The course is a part of her program Filmmakers of the Future.
By Brontë Cook
Published: November 20, 2019

Earlier this year, Ithaca College junior Eden Strachan, a documentary studies and production major, created “Filmmakers for the Future,” a program that aims to teach young people the basics of visual storytelling. Strachan originally brought the program to educational centers in her hometown of Syracuse, New York. This semester, she brought the program to Lehman Alternative Community School (LACS) in Ithaca, where she teaches weekly sessions and is helping students craft their own short film.

Opinion Editor Brontë Cook sat down with Strachan to learn about the program, her own passion for visual storytelling and the importance of giving young people the tools to create social change.

Brontë Cook: Tell me about the program you started.

Eden Strachan: So my program is called Filmmakers for the Future. It’s a no-cost film program for low-income communities, specifically for … students that want to learn filmmaking but might not be able to afford a filmmaking class, or they can’t get into a film program in their school. So this is for them. I started out at a Boys and Girls Club in Syracuse. … That’s where I filmed my documentary “This is Syracuse,” and the kids were really interested in the equipment I had. … So I went back there and asked [one of the directors] if I could do a couple sessions of a [film education] program my spring sophomore semester [of college]. … I was also welcomed into my high school, West Genesee High School, and taught some film classes with my high school film teacher. … After that, I was invited to LACS, which is down on the street from here. I go every week on Monday.

BC: How is it going?

ES: It’s going really, really well there. … They’re really enthusiastic. They already have a film program there as a class, and, if people can’t get into it, … they can do [my program], or if they’re already doing it in school, and they want to get some extra practice. So they’re really already in tune to it. … They’re interested, and they have a bunch of skills already. So it’s really just being able to allow them to hone those skills and practice through what I’m doing.

BC: What is your own history with film education? Why is this something you’re passionate about?

ES: I started filmmaking and journalism stuff in the eighth grade. … My teacher gave us iPads for this class project. … We all had to have a role [in the project], … so I was like, I’ll just be on the iPads, and I’ll just practice iMovie, do that part of the project. … And I realized I was kind of good at it. And prior to that project, I had an interest in journalism and community activism through the media. So when I was introduced to … the film side of media, I was like, “Whoa. I can tell the same stories that I’m writing about but through film.” So that’s where it started. And just having that opportunity to really be creative and tell those important community–based stories but through film, … it kind of changed the course of my life. So now I feel like I can give that back to other people and help them realize, “You can be a storyteller.”

BC: How, exactly, are you doing that?

ES: I make sure that Filmmakers for the Future has a social justice focus, even in the examples and the films that I show them. … The program ends in a couple of weeks, and they have been using the things that I’ve taught them about, like making sure that they’re using the medium responsibly when they’re interviewing people … and making sure that every story has a purpose. So they’ve really applied it, and I can see that they’re paying attention, and they’re excited and passionate about what we’re doing.

BC: Are the students working on any specific projects in the course?

ES: Their idea for their final project is to address gun violence in schools. One day they had … one of those safety drills because of the gun violence that has recently happened … in the country. … And they’re like, “Why do we have to do these things?” … It’s traumatizing for them to go into school and have to do that rather than focusing on being a kid or just going to school to learn. So they want us to capture that and make something that reflects their experience growing up in this climate. Yeah, so they’re excited.

BC: Youth activism plays a big role in today’s culture and society. Young people are the ones drawing attention to a lot of issues. Why is it so important to give young people the skills and the resources to put their voices out in the world?

ES: Well, when I was growing up, it was the older folks telling me, as the younger generation, “You guys are the future.” And I feel like that narrative is going to continue to be recycled. … The people before us are always going to encourage the people that are coming up to use the tools that they have and use their voices to make a change in the world. So we see that social media, video journalism and media all play a role and how people are using those platforms that are really accessible to most people to start these conversations. So if we don’t train them on how to use these platforms responsibly, then we’re doing a disservice to the future. … They can do so much. And if you do something well, it can have such an impact. So I hope that the things that I’m doing with Filmmakers for the Future are teaching the next generation of media storytellers how to do justice to their stories and the people that they’re telling their stories about.