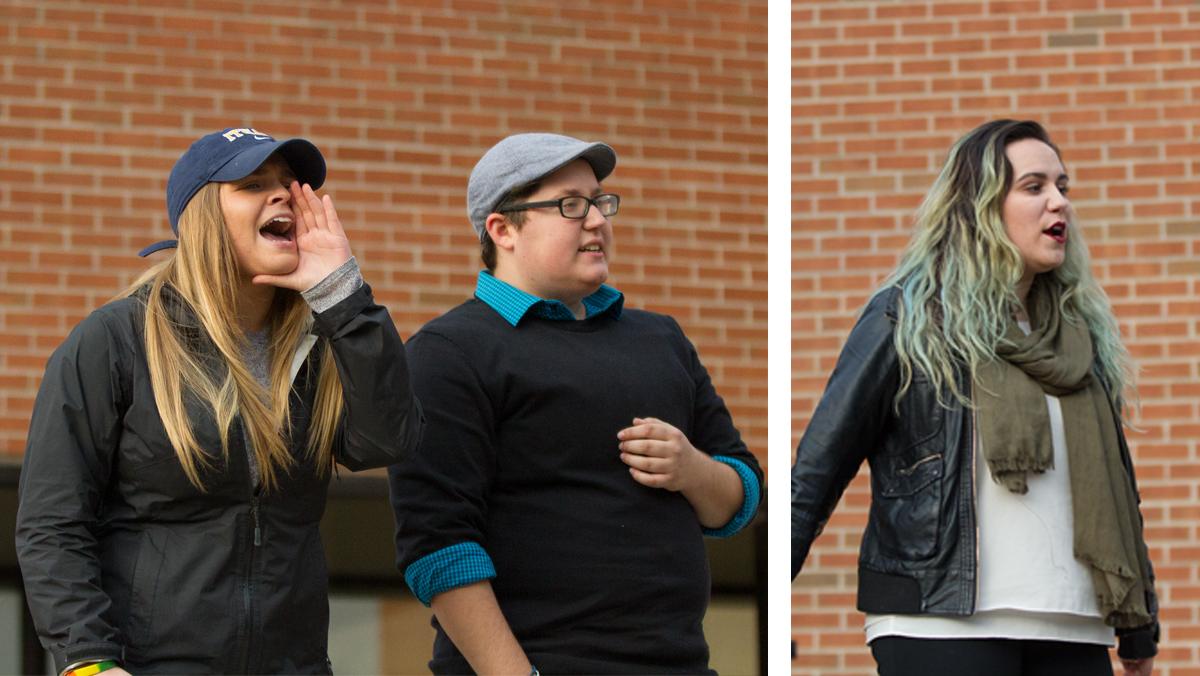 About a hundred students gathered by the Free Speech Rock on Nov. 16, joining a national movement demanding that colleges protect and support undocumented immigrants by creating a sanctuary campus.

Sophomores Hannah Titlebaum and Sunce Franicevic and senior Sara del Aguila organized the IC Not My President Walkout. On that day, Ithaca College was one out of 80 colleges to participate in this national day of action, which was organized by Movimiento Cosecha, a group that advocates for the protection of immigrants. At the end of the rally, many students signed a petition asking that the administration declare the college a sanctuary campus.

Now, the group is working on getting more signatures from people in the community, particularly faculty members, before sending a letter to the administration. And following the protest, the Student Governance Council has passed a bill advocating for the protection of undocumented immigrants on campus.

Opinion Editor Celisa Calacal spoke with Titlebaum, Franicevic and del Aguila about what inspired them to align with the Sanctuary Campus Movement, the response they have received from the community and importance of a sanctuary campus.

Celisa Calacal: What motivated you to start the sanctuary campus protest?

Sara del Aguila: We’re sort of all friends, and … I feel like everybody we know sort of had this mourning period after the election, feeling very disheartened and discouraged. And you know, after going through that for like a week, at that time we kind of just found that we couldn’t keep doing nothing. So we came up with the idea. … And then in scheduling it, we found out that there was a national protest happening on Wednesday, which was the day of ours, for the sanctuary campus movement.

Sunce Franicevic: The subject of undocumented immigrants is obviously a huge concern in the Trump administration. And he promised to deport 11 million undocumented immigrants, and we wanted to make it clear to people on this campus and in this community that we are living among undocumented immigrants every day. Like we pass them every day — people who work here, people who go to school here — they’re in our community. And I think that’s something that a lot of people don’t realize. … So we thought that that would be a good starting point like as a catalyst to move forward onto other topics that are concerning people.

CC: What should Ithaca College do to become a sanctuary campus?

Hannah Titlebuam: Basically, it will not give any information to ICE [Immigration and Customs Enforcement] agents that it is not legally required to do, and once again, that is legal. … It will not allow ICE agents onto campus grounds unless they have a legal reason to do so, which is again, unless they have a legal reason to do so. It prohibits the campus security from inquiring or recording an individual’s immigration status, which is something it’s not required to do. It won’t use E-Verify, that’s another thing no one is required to do. No employer is required to do that. It will prohibit housing discrimination based on immigration status. Housing discrimination has been overturned for a number of minority groups and oppressed groups in this country over and over and over again by the law. And the really big one here is it will support undocumented and DACA (Deferred Action for Childhood Arrivals) students equal access to in-state tuition, financial aid and scholarships. So those are students who have made use of something that was signed. … It was a presidential executive order, and basically what it allowed was … for people who had come into the country as undocumented people but had lived there since they were young and have maintained a permanent residency in the United States, it allowed them to apply for renewing two-year work visas.

SF: Exactly. And especially in a time like this, we want people in our college community to know that they are safe here. They are wanted. We want to create a community and an atmosphere free of oppression and free of racism, free of dividing people, making them feel like they are an outcast. We want everyone to know everyone is welcome here. We are all accepted. Trump is creating this America of, you know, groups and dividing people into their own little subgroups. And we don’t want that.

CC: What have you all done with the petition?

SDA: So what we’re working on right now is there’s actually another petition circulating online that we haven’t found the source of. Someone else made it. And we don’t know who it is, so we’re sort of contacting the people to find the source of that right now. And then with combining those signatures with a faculty survey — a petition that we’re actually going to send out — we are going to draft a letter to the administration that presents them with these numbers and demands that they meet the demands of the sanctuary campus movement.

CC: What impact in the long term do you hope to have on this campus?

SDA: I feel like with the sanctuary campus movement in particular, obviously, there’s also sanctuary cities, sanctuary homes that also serve as safe places for undocumented immigrants. But as far as a campus in particular goes, it preserves a person’s right to an education, which in this country is already so jeopardized by the fact that it costs so much money. So I would say that the sanctuary campus movement is so important because if a campus stands in the way of undocumented students receiving an education, they’re standing in the way of literally the economic success of the entire community because of the contributions that undocumented students and immigrants as a whole make to this country. So I would say it’s preserving the right for an American to have an education is one of the biggest ones. And also I would say to engage the community, because we’ve felt very separate since this election. So making sure we don’t become idle in this time when we need to be extremely active to preserve the rights of our fellow citizens who don’t always have their rights preserved. So I would say its to engage people and to unify people. Because if we’re able to unify to do this, we can unify to do other things.

HT: And making sure that we’re … taking extreme care not to normalize this, this election, this upcoming presidency — because I think the go-to reaction is to try to normalize it and take care of yourself and those closest to you, your family and your friends. … The important thing to realize beyond that is this is not normal. This is not OK. And from the positions of people who are most likely going to be OK, chances are very good that we will be OK no matter what, which is that privilege that Del was talking about. And if we’re going to be OK for the most part, then we need to use that position to spread that to others to make sure that everyone is OK.

CC: What kind of response have you gotten?

HT: Great. They’ve been so receptive. People have been reaching out to us. People we don’t know have been reaching out and asking if there’s anything they can do. People who are in different positions on campus with different clubs and with different organizations are asking if there’s something they can do, if we would like to meet with them and talk about ways that they’re able to help, which is of course is another invitation we’d love to extend to everybody. If you have a club, if you just have you and your group of friends, just yourself, anything — every single body is of use. And that’s one of the huge points of the Cosecha movement and the sanctuary campus movement, is the ensuring that you are putting your body, if necessary, in between Trump and anyone else who wants to hurt people and the people that they want hurt. And anybody can do that. Anybody here can do that, and this is one of the ways they can.