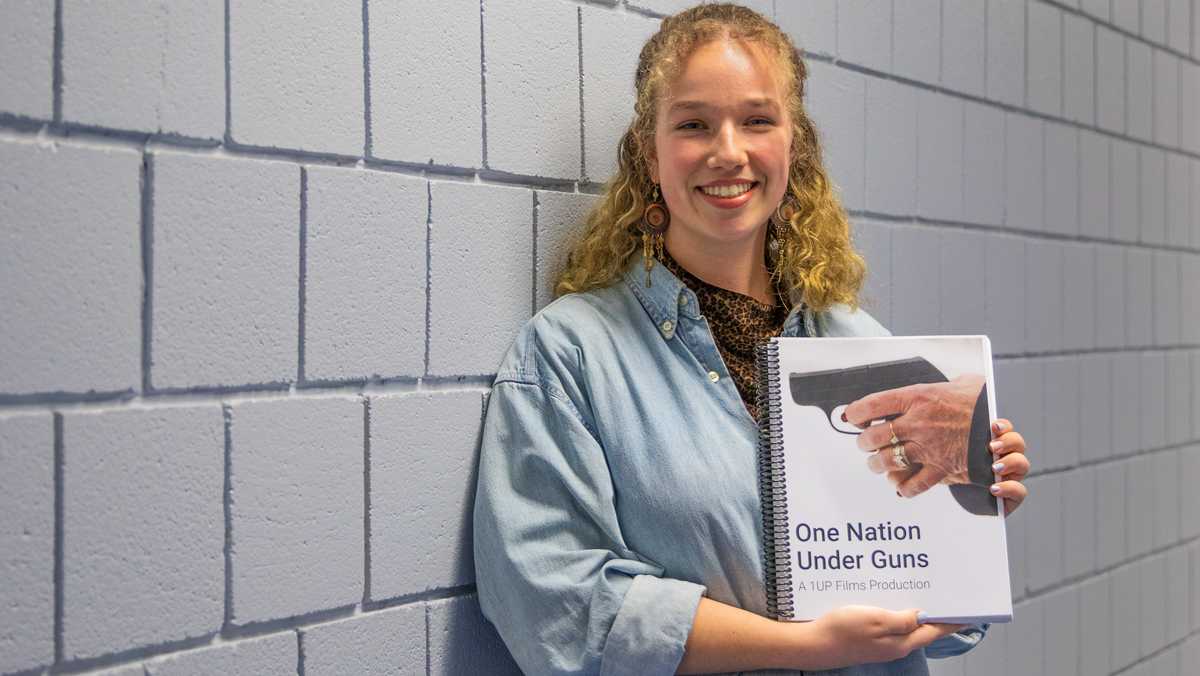 Molly Bailot/The Ithacan
Senior Olivia Forker, a documentary studies and production and English double major, has made artistic and academic strides in both of her scholarly pursuits.
By Kate Sustick
Published: January 23, 2020

In mid-December, senior Olivia Forker, a documentary studies and production and English double major, received two exciting pieces of news within the same week. First, Forker received a nomination from the College Television Awards for her documentary “One Nation Under Guns.” Then, later that week, her paper “A Fantasy Retold: Four Sleeping Beauties Awakened” was accepted into the Sigma Tau Delta English Honor Society International Convention.

Opinion editor Kate Sustick spoke with Forker about these two projects and how they reflect her interests as an interdisciplinary student and creator.

Kate Sustick: You are credited as a writer and producer on the documentary “One Nation Under Guns.” Could you tell me about how this project came to be?

Olivia Forker: The project was made in the class “Documentary Workshop.” … The objective of the class is to make as high-profile and high-level of a documentary as you can. … By the time that the [Tree of Life synagogue shooting] in Pittsburgh happened in November, we were ready to jump on that as a topic. … We started looking up individual cases. One of our stories ended up being a pastor in Mexico, New York, who conceal carries when he is at the service on Sundays, with a few others in his congregation that also conceal carry. This fact is well known and well respected in the community. It showed us a different perspective on mass shootings and how people choose to protect themselves.

KS: What do you think your message is doing for the issue of gun violence?

OF: Our documentary does not necessarily pick a side of that argument. We are more focused on discussing why communities are afraid and why nothing has happened to make communities less afraid of things happening. People are taking potentially drastic measures to protect their communities because there is no widespread agreement on how to fix the problem. … We’re hopefully showing that there are far more than two sides to this. … We realized that you can say “gun violence” or “mass shootings” and a whole world of potential opportunities for storytelling emerge. Our film can potentially be seen as more of a portrait of lives in America, but it is not necessarily meant to represent the whole of the debate.

KS: Within the same week as the nomination to the College Television Awards, your paper was accepted to the Sigma Tau Delta English Honor Society International Convention. Could you tell me about the essay you submitted?

OF: The basis of the paper is basically a confrontation of four different versions of the Sleeping Beauty fairytale, ranging from the first recorded version … to the Disney movie that came out in the 1950s. I related these to four 19th–century texts: Ipsen’s “Hedda Gabbler,” Tolstoy’s “Anna Karenina,” Flaubert’s “Madame Bovary” and Chopin’s “The Awakening.” … They were all extremely similar because they all feature this image of an awakened woman and all end in her suicide. … I found that all four women had two versions of an awakening: one being the realization that they are unhappy with their lives as women in the society that is around them, and the other being a more metaphorical awakening. The relationship with Sleeping Beauty ended up being interesting to me.

KS: What drew you to submitting the paper to this convention?

OF: I was encouraged by a friend in the English department to submit. All of a sudden I had a 25 page paper in my lap that I wasn’t doing anything with. So I was like, ‘well, why wouldn’t I start submitting this places.’ Hopefully I can look at some more conferences or modes of publication for it, because there is still more that I want to do with the paper. It is actually four of us that are going from the English department, so that’ll be exciting.

KS: In what ways has working interdisciplinary in these two very different academic fields improved your experience as both a student and a creator?

OF: It’s funny because that’s the question I’ve been hoping to answer since I declared my major. When I declared the two I was like, “Hopefully by the time I graduate I figure out, first, why I chose them, and, second, how they should interact with each other.” I consider myself a writer and a researcher, so that … is a huge part of documentary producing and filmmaking. A lot of it just has to do with an interest in human beings and behavior. I am ultimately interested in stories and how they are told. That’s where I see the two overlapping. I hope to continue work that looks at how people act, whether it is through a version of a film or paper.