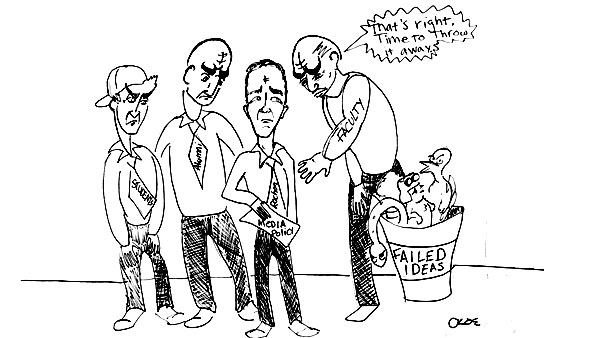 Less than two months after its implementation, the student media policy  has been rescinded.

President Rochon’s repeal of the policy follows public criticism from faculty members, a referendum from the Student Government Association, opposition from student media organizations and on-campus student protests.The policy required student media to go through Dave Maley, associate director of media relations, to contact any of the top 84 administrators at the college and raised more general concerns about the increasingly centralized nature of the college’s governance.

From the beginning, Rochon said he would consider changing the policy if it caused problems. The choice to rescind shows Rochon’s willingness to listen to the campus community when it comes together. However, the repeal should not be the end to the conversation about top-down leadership at the college.

Opposition to the media policy was not simply a reaction to the constraints it put on student journalists to interview sources in a timely manner, nor was it out of pure concern for the lack of transparency that may result from a policy that could filter messages from student journalists to key members of the administration. The opposition surrounding the new policy had roots in growing discontent with the administration’s inability to incorporate the college population in decisions that affect day-to-day operation. The campus community should continue to unite to ensure all voices are heard as the college moves forward with key programs like IC 20/20.

Rochon said the decision to put an end to the policy came after he had the opportunity to speak candidly with student media leaders. While it’s encouraging that Rochon took the time to speak to members of the community about the policy, the conversation should have taken place before the policy was implemented. By reaching out to the campus community after the policy was instituted and opposed, the administration fueled the sentiment that the college is run through a top-down structure, and other voices are only heard after decisions are made.

The repeal of the media policy is a step in the right direction toward a less-centralized and more-transparent administration. Following Rochon’s compromise, the faculty have a responsibility to continue the discussion about how to create a better balance of power at the college.