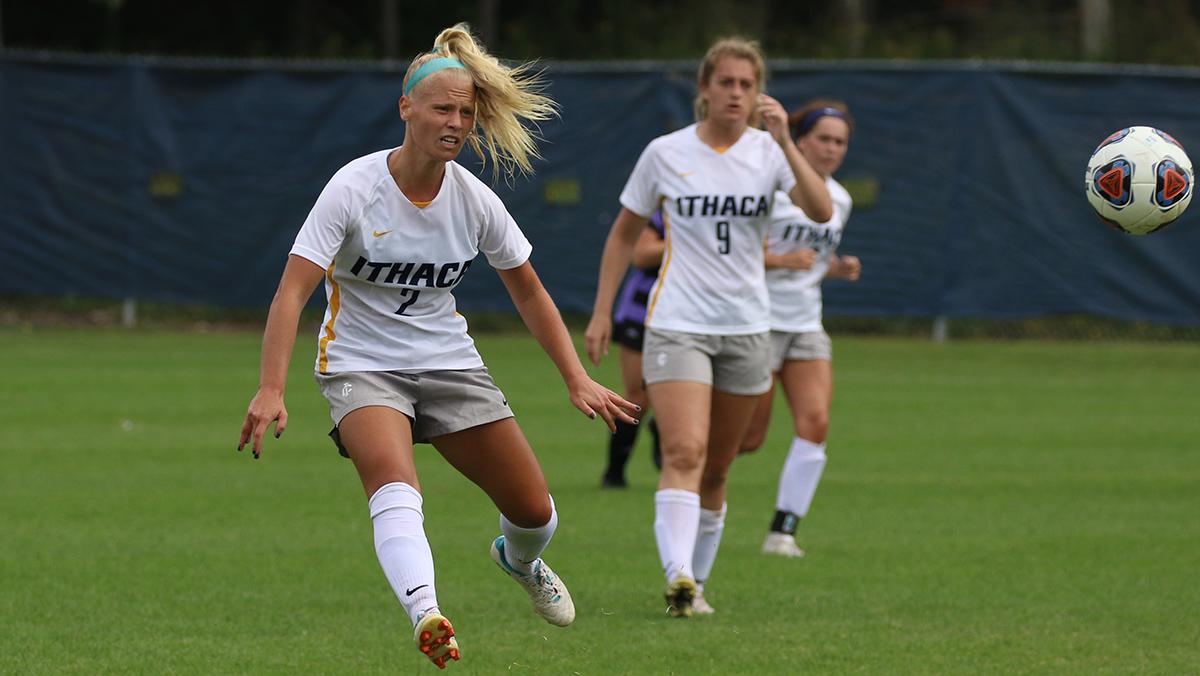 From starting their collegiate careers as part of a large freshman group, living with each other and playing through a pandemic, the graduate students on this year’s Ithaca College women’s soccer team are considered the “core four.”

The college’s women’s soccer program has had just one graduate student on its roster in the past 10 years, leaving it up to the seniors to set the example for the younger players. However, the 2021 roster has four graduate students: Alex Epifani, Kelsey Espenhorst, Kate Kohler and Rebecca Jackson.

All four players are no stranger to the pitch as Epifani was named an All-American in 2018 and 2019. Espenhorst has started in every game this season so far and started in all but one of the college’s games in 2019. Kohler has started 51 games and counting in her college career, including each game this year. Jackson has seen action in each game so far this season, starting five contests for the Bombers.

Kohler, a graduate defender and 2018 All Liberty League All-Academic team member, shares a tight-knit connection with the other fifth-year players, noting that Espenhorst was her roommate during their freshman year. She said the team’s chemistry helps translate to success on the field.

“On a leadership aspect, it made it really easy to go from that friendship mentality into holding each other accountable on the field,” Kohler said. “We trust each other with our lives. It makes it all go smooth and it’s so much fun playing with your best friends.”

Espenhorst said she has enjoyed the positive presence that the 10 freshmen have brought to the team.

“I tend to think that the graduate students are more removed from the team than the first years,” Espenhorst said. “They seem to sort of jump right in and sometimes I feel more like the outsider. … We’re both on the opposite ends of the spectrum. So I think it almost creates a similarity between us and this cool dynamic.”

Jackson said she hopes she will leave a lasting impression on the freshman and sophomore athletes, considering neither of the two classes have played in a collegiate game coming into the season.

“We can instill the culture that we pride ourselves on to the team to the younger ones,” Jackson said. “It’s good to help develop them with our experience.”

This year marks Mindy Quigg’s 28th season as the head coach of the program. While not having graduate student-athletes on her team as often, she said she shares a strong connection with those four players and feels the veteran presence has an impact on the team’s dynamic.

Quigg also said she looks at her team’s leadership differently because of the leadership styles the graduate students learned from their former teammates, highlighting how important honesty and connectivity are with each class.

“I think it’s natural to have an extra connection when you spend more time with somebody,” Quigg said. “To have had that time with them and not that they have turned the corner, I think it makes a difference. It still allows the seniors a leadership role, but it gives them a sense of empowerment because of the compatibility between the two classes.”

Junior defender Rachel Richards said experience plays a key role in the dynamic the four veterans set for the squad. Everyone on the team has mutual respect for each other regardless of class, playing time or experience.

“I think it sets a good tone because they are coming back, they’re coming with experience, and they’re coming in with a lot of minutes,” Richards said. “I think they work with our senior class instead of overriding them. … Whenever you have a conversation with them, soccer wise, you’re going to listen. They have a lot of experience.”

Richards also acknowledged the extent to which all four players would go for the sake of their sport and all that comes with it.

Freshman defender Carolina Cedraschi said that the team’s veteran presence has a positive impact on her development and that she does not let the larger age gap affect her relationships with them.

“They give you a lot of advice, especially on the field,” she said. “I definitely looked up to Kate [Kohler] especially because she has given me a lot of advice as a defensive player. They might be intimidating at first, but as you get comfortable on the field, I think it’s a really good environment to be in as they are very welcoming.”