Alumni set out to tandem bike over 4,000 miles for charity 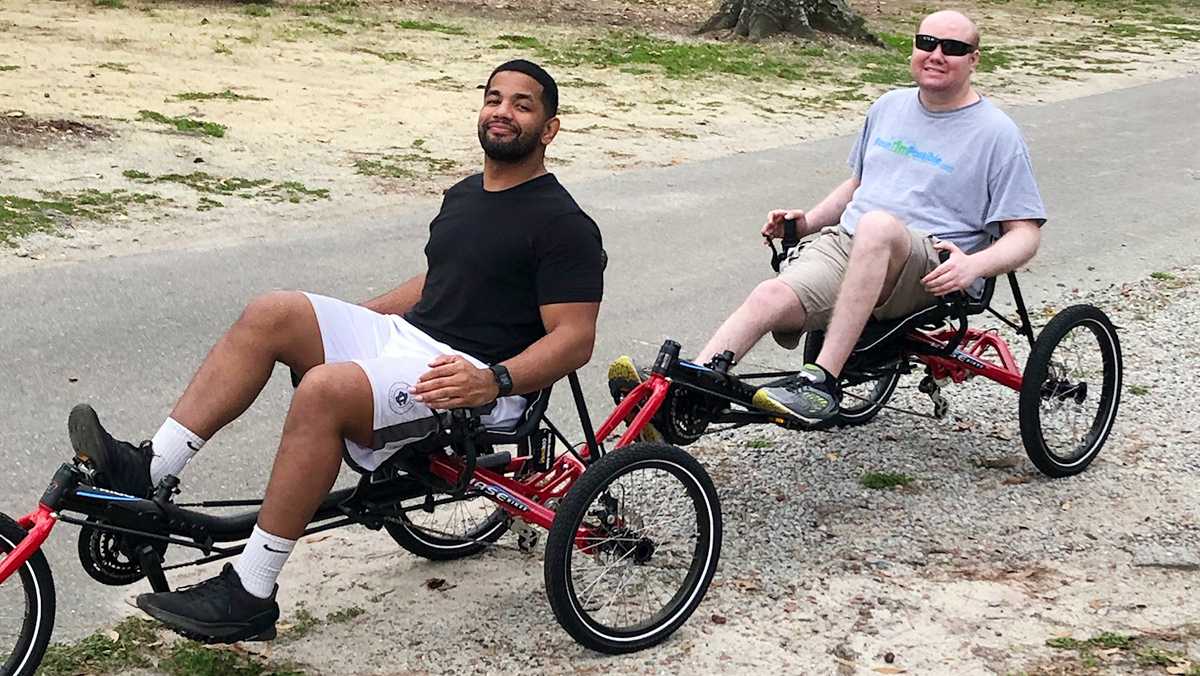 Two Ithaca College alumni will be biking nearly 4,000 miles across the country starting in June to raise money and awareness for those with life-threatening illnesses and disabilities.

Tim Conners ’17 lost his eyesight at 15 years old from T-cell acute lymphoblastic leukemia. Fellow alum Carlos Toribio ’18 is joining him to explore and support his friend. They plan to raise $20,000 to cover the costs of the mission and establish a non for profit organization called The Redefine Possible Foundation.

“The idea of this foundation is to really help people forward, to help others through education and opportunities to live life fully, to make a difference, and redefine what’s possible like I’ve been able to do with my life with so much support,” Conners said.

Toribio met Conners in an economics class at the college and through the wrestling program. Toribio said Conners’ father knew head wrestling coach Marty Nichols, so Nichols brought Conners in to meet the team. Toribio said that while they already had class together, he found it easier to talk to him once he found out Conners was a wrestler too. The two developed a friendship that has lasted even after graduating.

“You have different views and perspectives, and we argue, but at the end of the day, we’re really good friends,” Toribio said. “I guess the arguing is just part of it to get closer. I’m just grateful to have him in my life like my other friends.”

Conners and Toribio will be starting their journey in Anacortes, Washington on June 6. They plan to reach their destination in Bar Harbor, Maine on Sept. 12, making their trip nearly 100 days. Toribio said the pair plans on staying at campsites to rest overnight rather than hotels.

Conners was inspired to begin this journey to bike across the country after going on a different mission where he set out to summit Mount Kilimanjaro in 2017.

“I was trying to think of something else we could do to make a similar impact along those lines but closer to home,” Conners said. “I also want to just make a positive impact and get people to really think about hope and stop focusing on the negative stuff, bringing each other down and start focusing on bringing each other up.”

Toribio has also been on expeditions in preparation for this experience. While spending a summer in 2018 backpacking across Europe, Toribio said he became inspired to bike across America after talking to an older couple in an airport that told him that anything he saw in Europe, he could see in America. A few months later, he was catching up with Conners, who mentioned he was looking for someone to bike across the country with.

Conners participated in community service during his childhood and has continued to give back as an adult. When the COVID-19 pandemic hit and delayed his planned start time of summer 2020, he started the process to create The Redefine Possible Foundation and volunteered to help at the Upstate Golisano Children’s Hospital in Syracuse, New York, where he was treated. Conners is hoping to continue this work with the children’s hospital with The Redefine Possible Foundation.

“[This mission] is much more than Carlos and I just riding a bike across the country,” Conners said. “It’s more about these ideas of hope and possibility and knowing you’re more than your circumstances.”

Conners published a book, “It’s Impossible Until You Do It,” in 2016 that highlights the idea of paying it forward. Toribio said Conners has worked to inspire others.

“Tim wants to help others know that they’re not their situation, but what they do with it,” Toribio said. “Tim may be blind, but he still has a life to live.”

Junior wrestler Logan Ninos said he worked with Toribio during his freshman season in 2018–19 before Toribio began assistant coaching at Long Island University. Ninos said this service project is not out of character.

“Just in general it’s a really cool thing being done by a really cool dude,” Ninos said. “Carlos is a very selfless person and this event doesn’t surprise us at all as a team.”

“The vision I have”

Q&A: Senior publishes book about journey with cancer and blindness