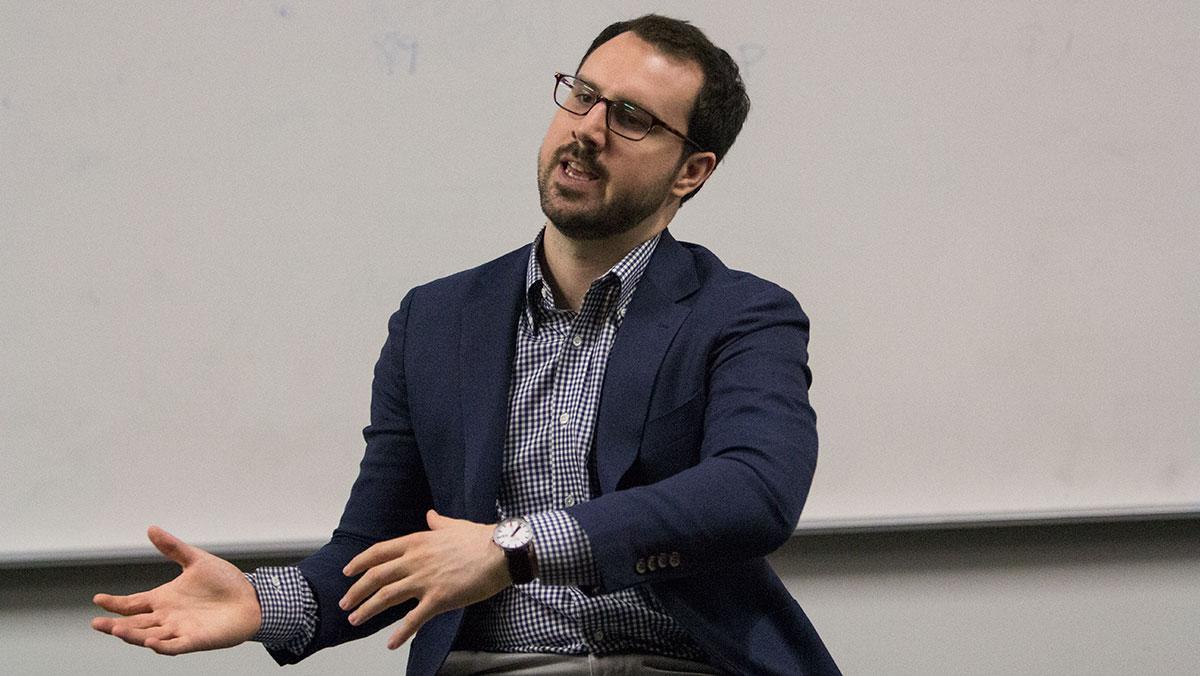 On April 6, Ben Strauss ’08, a former Ithacan sports writer and columnist, returned to the Ithaca College campus to speak to students about his recently published book, “Indentured: The Inside Story of the Rebellion Against the NCAA.” Strauss, who is also a contributing writer for The New York Times, co-authored the book with Joe Nocera, a Times’ op-ed columnist.

The book was published in November 2015 and critiques the inner-workings of the NCAA, focusing on the issue of whether student-athletes should be paid.

Senior Writer Kristen Gowdy spoke with Strauss about his career since graduation, his new book and his opinions on the future of college athletics.

Kristen Gowdy: You graduated from Ithaca College just eight years ago. How did this all come about?

Ben Strauss: I’m from Chicago, so I moved home because it was the height of the Great Recession. I freelanced and did an internship with Chicago Magazine, couldn’t get a job, so I moved to Washington, D.C., in 2009 and got an internship on Capitol Hill and worked as a press secretary for two years and realized I hated it. I moved back home to my parents’ house in Chicago and covered high school sports for The Chicago Tribune. It was pretty terrible. I had a friend, a fellow IC grad, who was the overnight sports producer for The New York Times website, and he asked me if I wanted to write some blogs, and I said, ‘Of course.’ … That’s how I got connected to Joe [Nocera]. He was a columnist for the op-ed page at the Times, and he asked me if I wanted to be his research assistant for this book. ... So for the last four years, I covered a lot of college sports. I got to collect information for the book and cover everything in real time, so it worked out really well.

KG: What was the inspiration for your book?

BS: College sports is a $13 billion industry. That’s more than the NFL. The players, obviously, see next to nothing. You’re looking at this huge, huge pie, and players are getting less than a sliver of it. Money is one of three buckets that I would say is really the problem with college sports. The second one is that there’s a 400-page rulebook, and almost every single rule applies to what an athlete can or cannot do. … The rules constrict the activities of the athletes who, when we talk about men’s basketball and football, are generating tremendous revenue, and the money generated does not go to them. Then the third thing is the education that is supposed to make this OK. You’re going to come and generate these millions, billions of dollars, but it’s OK because we’re going to promise you a free education and a better life, whether that’s a professional career or a degree in which you improve your potential to earn. … Unfortunately, graduation rates for football and men’s basketball players are about 50 percent.

KG: Do you think there is a point where the NCAA will end up paying its athletes?

BS: It will happen when a team goes on strike. Given what happened with the O’Bannon lawsuit and the Northwestern union movements, each of these won the preliminary hearings then lost on an appeal. Nobody in a position of power wants to have blood on their hands in dismantling the system we have. Not even dismantling, actually. College sports as we know it today would still go on if players got some money, but nobody wants to be the person who changes this.

KG: College athletes aren’t allowed to be paid because they are considered “amateurs.” What is the NCAA’s argument behind this idea of “amateurism,” and how has it grown to be what it is today?

BS: In the 1950s, there was a football player in Texas who died in an on-field injury. His family sued for workers’ compensation. People in the NCAA office realized that they can’t have every player who gets hurt suing for workers’ compensation, so they made up the term ‘student-athlete,’ and they embedded it in all their literature, and everybody had to use it. It’s a made-up term, but the mythology around it is super powerful. Today, it stands for something. It stands for the ideal of what we would love college sports to be, that this is all part of developing young people in the United States. But it’s all made up, and it was done to combat workers’ compensation lawsuits. The NCAA, for 60 years, has campaigned in the American public to make sure that this status-quo remains, that the American public buys into amateurism.