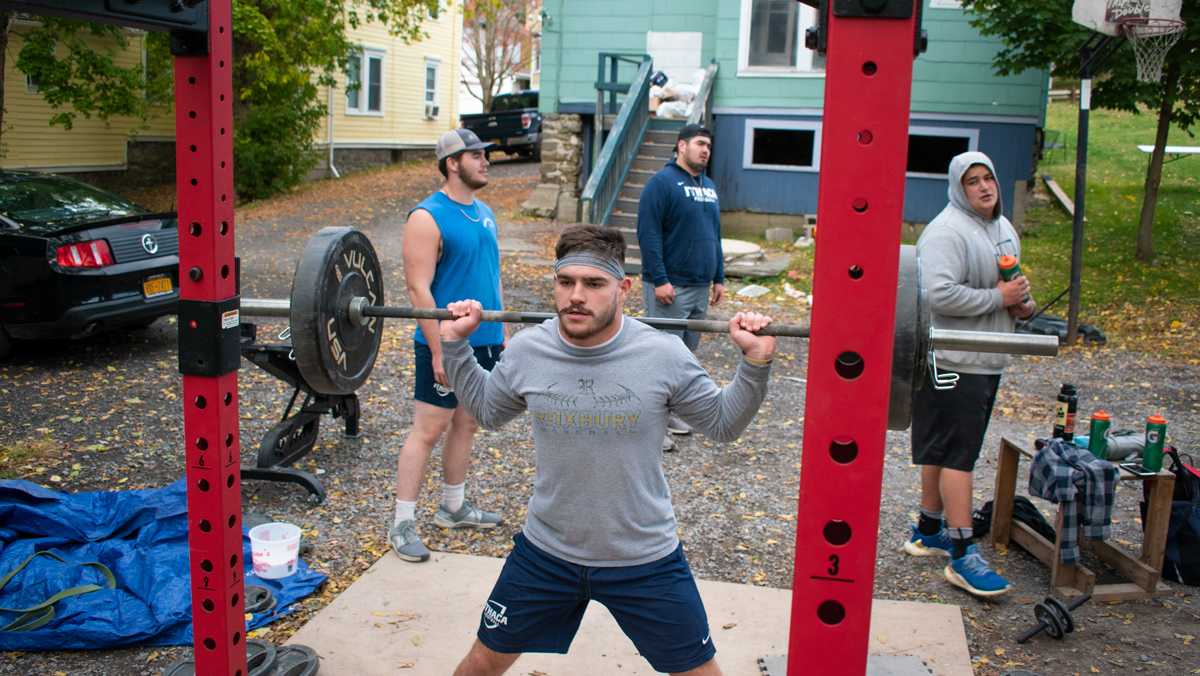 Over the summer, Ithaca College junior swimmer Tim Hector conducted summer workouts for the men’s and women’s swimming and diving teams. Rather than diving into a pool early in the morning, Hector and his teammates assembled for Zoom workouts — not exactly what he had in mind as a captain of the team, he said.

When the college decided to hold the remainder of classes online in March, athletes like Hector adapted to an at-home, no-gym routine because of the COVID-19 pandemic. Even as gyms in New York state opened in August, athletes like Hector still found unique, pandemic-safe ways to prepare for their seasons.

Hector said that he and his roommates in Ithaca, who are also his teammates, have created a home gym, something he did not have while living with his parents. While living at home, he did body–weight exercises and occasionally used spare dumbbells for strength training. However, he said the loss of cardio, like swimming, was the biggest hit, as he was not able to train in a pool in the spring. Instead, he used a rowing machine while wearing an altitude mask, which limits the intake of breath, to replicate what his breathing would have been like while swimming.

Hector said that prior to spring break, he felt as if he was in the most athletic part of his swimming career. Now, that feeling is gone.

“You could never actually replace the actual swimming,” Hector said. “It was really disheartening because … I went from being in one of the most possibly in-shape points in my entire life to not even being able to do a simple swim workout.”

The Liberty League canceled all fall competition in July, something junior libero Jordyn Lyn Hayashi said was disappointing to her and her volleyball teammates. Then, the college reversed its decision in August to hold classes in person. What might have been an unconventional season and opportunity for Hayashi to reconnect with teammates became another semester stuck at home, with teammates still rooted in different parts of the country.

“I was heartbroken because I was so excited for the upcoming season,” Hayashi said via email. “However, I think it was the smart thing to do, especially with everything going on in the world right now.”

Hayashi said that over the summer, the volleyball team was given a strength and conditioning packet with adjustments for those who wanted to work out at home. Along with her strength packet, she would skateboard, swim at the beach or follow workout videos on YouTube. Now living in Ithaca, Hayashi and her teammates hike, run and meet virtually twice a week to do circuit workouts.

Victor Brown, head coach of strength and conditioning in the Department of Intercollegiate Athletics and Recreational Sports, said the department usually begins planning fall athletic strength and conditioning programs in April, which was shortly after the college shifted to remote learning. Brown said he wanted to create workouts that were accessible and safe for everyone.

“We had to remain adaptable and be creative,” Brown said via email. “The health and safety of our students is of the highest priority. In terms of COVID–19 safety, we have created strength training programs for student-athletes that can be completed in the weight room ([New York state] guidelines require masks in facilities) and at home with minimal or no equipment.”

Brown said the strength and condition program has utilized digital media platforms, including YouTube and Instagram, to demonstrate exercises and educate student-athletes about remote training techniques. In April, Brown also held a weekly performance education series on Zoom that he is considering relaunching.

Brown said it was important for the remote fall season to foster a sense of connectedness among athletes.

Junior offensive lineman Andrew Testani and his roommates in Ithaca, who are also members of the college’s football team, have been able to create a sense of unity in their training by making an outdoor weight room that is complete with a squat rack and bench press. The players now lift together several times a week.

Prior to moving back to South Hill, Testani said that he did not have access to this kind of equipment, so he was forced to get creative in his training.

“I started off by purchasing 300 pounds of sand from the local hardware store and then did what I could with five sandbags,” Testani said. “They were each 60 pounds, so I would tie two together and do overhead presses.”

Hector said that because the swimming and diving team is not in season, it does not have a strict strength and conditioning packet. Instead, he and his teammates who are living in Ithaca are training with Swim Ithaca, a local club team with an outdoor pool. He said that he hopes the swim teams will be able to have a season this year, even though he knows plans are still tentative.