Athletes look to get ahead in course loads to graduate early 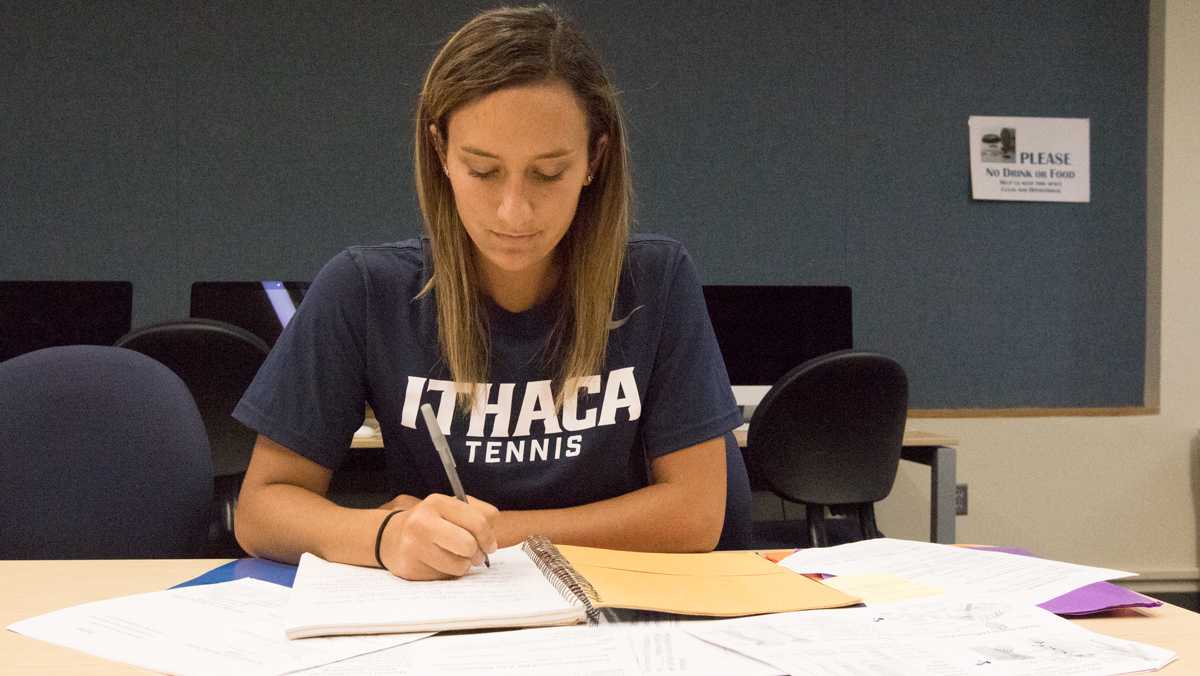 Despite being named to the Empire 8 All-Conference Second Team for doubles, senior tennis player Taylor Ginestro has to give up her fourth year of NCAA eligibility to go on to graduate school.

Ginestro, a speech–language pathology major and tennis player, is earning her degree in three years because she brought in 24 college credits from high school. Since she brought in so many credits, she was able to skip most of her ICC courses and start taking 200–level courses her freshman year.

Ginestro said that her typical day while balancing graduating early and athletics can be nerve-wracking.

“I would have classes in the morning, squeeze in lunch and then have two more afternoon classes,” she said. “After that, I would rush straight to practice and then straight back home to do homework. It was very hard to get in bed before midnight, and I would not be able to start homework until 7 or 8 p.m.”

The only way that she would be able to play a fourth year of tennis is if she went to graduate school at Ithaca College, but she is currently looking at other graduate schools. Her top two schools are Loyola University Maryland and University of Rhode Island.

Seniors Savannah Brija and Allie Panara are two students who are a part of the college’s six-year Doctorate of Physical Therapy program. This program allows a student to earn a bachelor’s degree in Clinical Health Studies combined with three years of graduate school for Physical Therapy.

Both varsity student-athletes are completing the bachelor’s part of the program in two years instead of three, making it a five-year doctoral program.

Brija, a member of varsity crew, is finishing the program early by taking extra classes. Throughout her college career, she took summer courses and winter courses after realizing she could graduate early.

Brija did not bring in any college credits that went toward her major. However, the credits she did bring in went toward filling her general credit requirement. Even though she brought in some credits, she said, completing the bachelor’s program early was never a goal.

“My mom wanted me to complete the program in five years, but I said, ‘No way,’ ” Brija said. “Then, halfway through my freshman year, I looked at the classes and I said to my mom, ‘I think I can actually do this.’ I sat down with my adviser, and we both agreed that it was possible.”

Brija says that her biggest challenge is not having as much time to take as many academic classes as she would like.

“Even though I am not behind, I do have a year less of schooling than everyone else,” she said. “If I had another 15 to 18 credits, I think I could have taken more courses that would have given me more background information.”

Panara will also complete the program in five years. She brought in 16 college credits from her high school. While Ginestro’s credits fulfilled her ICC requirement, Panara’s fulfilled a lot of outside electives. Much like Brija, graduating early was not her intention.

“I was planning my schedule out last fall, and I realized I did not have that many more classes that I had to take,” Panara said. “I went to my academic advising meeting, and my adviser suggested that I was a great candidate to accelerate even further and get the program done quicker.”

Panara said that staying organized is extremely important to her.

“I have a calendar that I use and that I stick with, and that helps me manage my lacrosse schedule and my academic schedule,” she said. “That really keeps me focused and has helped me get through to where I am today.”

Both physical therapy majors have upcoming clinical work and internships. Brija will be going to Florida to complete her first clinical work in summer 2018, while Panara’s has yet to be determined. One of the things that both athletes will struggle with next year is balancing their graduate clinical work with their athletics.

Since 2013, only two crew athletes have participated in their crew season during their graduate programs.

Senior soccer player Reid Garner is another student that is graduating early. Garner, a biochemistry major, is graduating one semester early. She was able to do this by taking 17 to 18 credits each semester so far. One of the challenges that Garner has found is prioritizing everything in her schedule.

“Definitely the hardest thing is prioritizing time,” she said. “For me, this year especially, it’s hard trying to balance my biochemistry research with soccer and classes. I’m fortunate enough to have a strong support system in soccer and in the lab to help me when things get tough.”

After she graduates, Garner plans on taking the Medical College Admission Test and starting applications to medical schools in the summer.

“I took soccer into account when deciding whether or not to graduate early,” Garner said. “I decided I really didn’t want to experience college without soccer. There’s so much pride in being a Bomber, and getting to play on that grass field is an experience I won’t soon forget.”