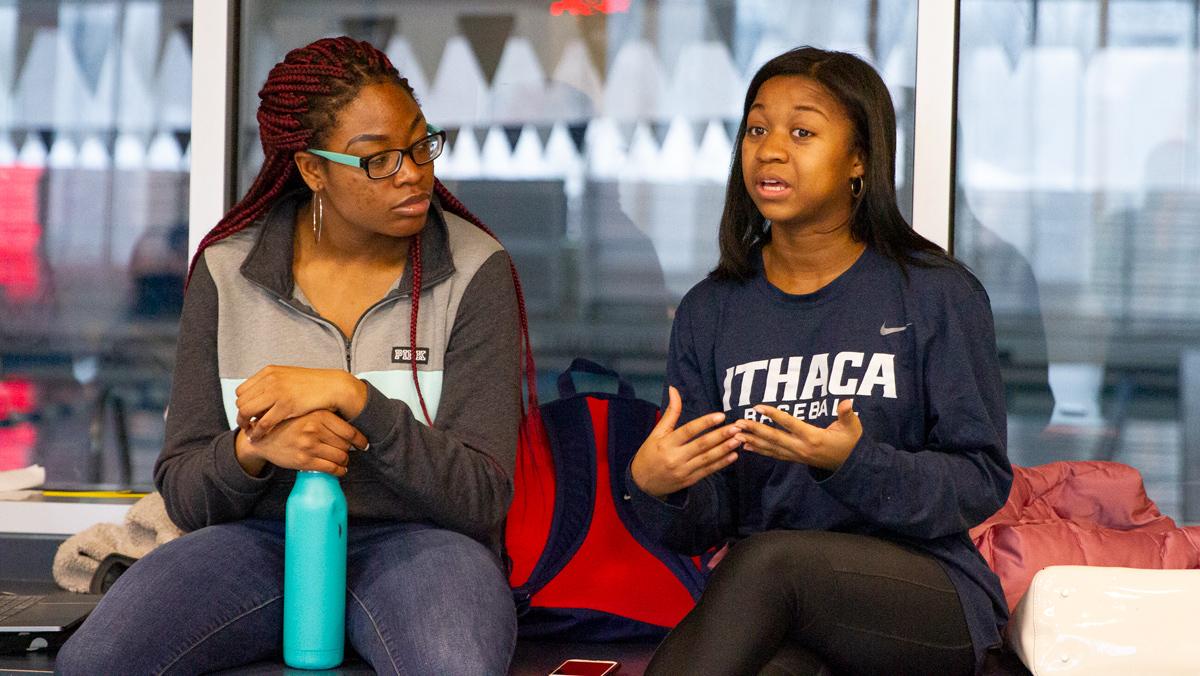 When sophomore Katelyn Hutchison came to Ithaca College last year, she said that she felt lonely as one of the few black athletes on the women’s track and field team. This semester, she created the Student-Athletes of Color (SAOC) club with the goal of creating the community she did not have.

SAOC was recently started by Hutchison and is intended to provide a forum for student-athletes of color to discuss their experiences on their respective teams and racial identities. The club held its first meeting Feb. 2.

Hutchison said that she came up with the idea for the club after she returned home to Chicago for the summer after her freshman year. She said she noticed that she felt more comfortable with her summer training group of mostly black teammates than she did with her mostly white team at the college.

“Once I went through that process, I was like, ‘wow,’” Hutchison said. “I don’t know if there’s anybody else feeling like me, but, if there is, I think that this would be the time to start providing resources for other people who might feel like me.”

Sophomore Warren Watson, a member of the football team and the treasurer of SAOC, said he believes the club will be an important continuation of discussions about race in the Office of Intercollegiate Athletics. The office hosted Voices of Experience on Jan. 21, an event that featured a panel of student-athletes of color voicing their race-related experiences in athletics at the college. The panel tackled issues including loneliness, use of the N-word and lack of inclusivity.

“From the panel discussion we had, I think that we were able to see a lot of issues that happened on some of these sports teams that don’t really have a lot of POC on them,” Watson said. “I think that it’s very beneficial to sports as a whole and to the school that POC athletes have a place where we can all come together and talk about issues within different sports and issues with just being a person of color in general.”

At the club’s first official meeting, only six people — the club’s officers — attended. Their topic of discussion was why they chose to be athletes and why being an athlete of color matters to all of them. They also discussed logistics for the club’s future and decided that they will hold biweekly meetings based on members’ schedules.

Junior Allura Leggard, a member of the track and field team and vice president of SAOC, said she believes the club will grow as its message spreads. Currently, the group is working on developing a social media page and is asking other POC organizations to promote SAOC.

“I would say my hopes for the club is one, definitely to spread and raise awareness in the athletic department, which I think is a huge thing on Ithaca’s campus,” Leggard said. “We’ve really been trying to do that.”

Watson said the officers of the club are working on ideas for expanding throughout the semester.

“We’re trying to create an environment where we can talk and have healthy conversation,” Watson said. “It’s going to be a catalyst for change.”

Leggard said the group will serve as a safe, inclusive space for athletes to express their feelings.

“There’s nothing to fear in this club,” Leggard said. “We have open ears, and we want to hear everyone’s experiences. We want everyone to feel like, no matter what, they have a place to talk and ask questions.”

Hutchison said she wants to provide the support system for other athletes of color that she was missing when she first came to the college.

“You’ve got people there for you,” Hutchison said. “Even if you don’t know me, you can come to me. If you feel like you’re crazy, I guarantee you 110% that you’re not.”