Balance of Mind: Gymnasts learn to tame their minds 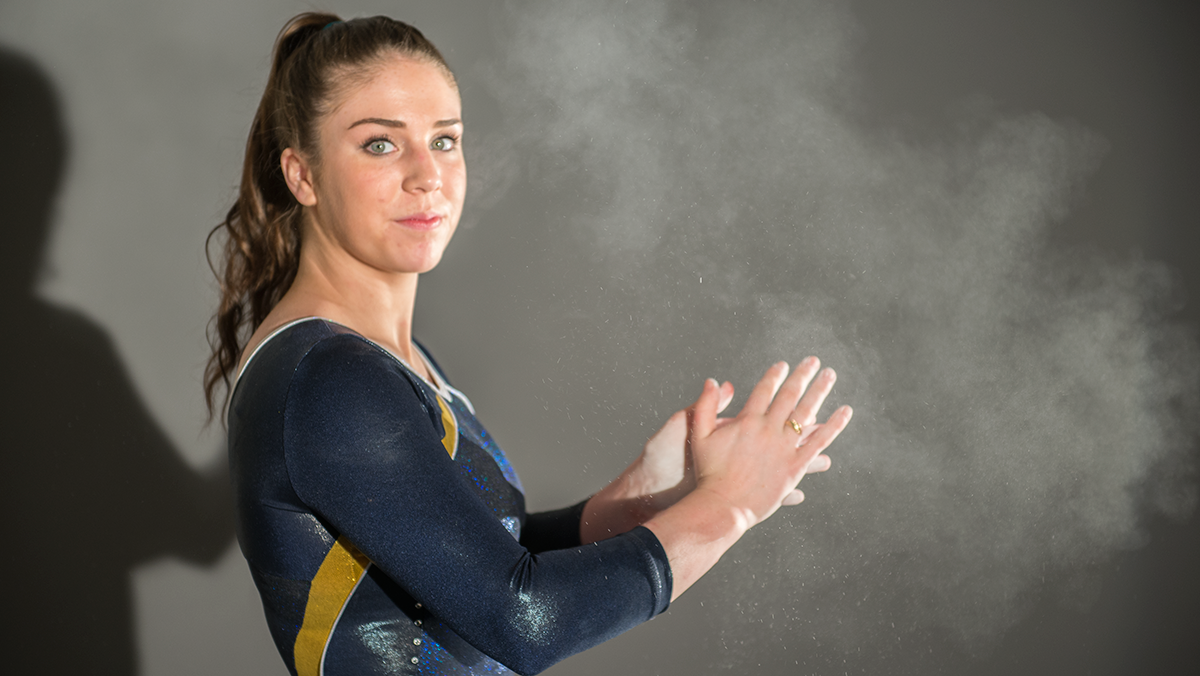 The Ben Light Gymnasium bleachers were filled with students cheering for the Bombers. Parents watched as their children warmed up to compete on the floor exercise, the event where gymnasts can allow their personalities to show.

Time passed, athletes competed and performed well, and then it was freshman Haley Lyons’ turn to compete. She walked onto the floor with a confident smile as the instrumental version of “Intoxicated” by Martin Solveig pumped up the audience.

She was hitting her passes. They were clean, and you could tell she was having a fun time with her bright smile and bubbly personality.

But then, in the blink of an eye, she landed short on her left foot on the final tumbling pass, dislocating her ankle. Lyons had previously broken this foot twice and had surgery on it. A month ago, she ended up on crutches, and just like that, gymnastics was temporarily taken away from her.

“When you are practicing, you don’t value the sport enough,” Lyons said. “You say, ‘I don’t want to go to practice today.’ But when it is taken away from you, you miss it so much. I just want to be practicing right now.”

A typical saying in gymnastics is that it is 90 percent mental and 10 percent physical. Injuries make the sport even harder on the brain, and the athletes on the Ithaca College gymnastics team have had their fair share of injuries this season.

Mental blocks are common in any sport, but in gymnastics, keeping a clear mind is extremely difficult. Gymnastics involves a training that is long term and leads to more difficult and dangerous skills. Lyons is not the only gymnast struggling through an injury right now. Many gymnasts on the team are currently battling injuries.

Graduate student Valerie Cohen went through an Achilles tendon tear and surgery in January 2014. At the Cornell Invitational on Feb. 14, Cohen landed short on a tumbling pass on floor, causing her to tear her right Achilles tendon for the second time, and she is currently recovering from her most recent tear.

Cohen said the road to recovery takes a toll on a gymnasts’ confidence.

“I think the hardest part was believing I would come back,” Cohen said. “I couldn’t walk for so long. When you can barely walk, it’s hard to believe you will tumble again.”

During the meet against Rhode Island College on Feb. 21, sophomores Kaylee Pacunas and Mina Shernan got injured during a warmup.

Shernan tore her anterior cruciate ligament, medial collateral ligament and meniscus. Pacunas said she is not sure yet what exactly she injured; however, it is something in her ankle. Both gymnasts are out for the rest of the season.

Sophomore Danielle Maffuid, a gymnast on the team who has suffered from injuries at the high school and collegiate levels, said injuries come with the sport.

According to a study from Stop Sports Injuries, more than 86,000 gymnastics-related injuries are treated annually in hospitals, doctors’ offices, clinics and ambulatory surgery centers.

The study also showed that for the lower body, the knees and ankles are frequently afflicted with injuries and are the result from the landing and dismount activities. ACL, Achilles tendon and lower back injuries constitute the majority of the injuries in this section of the body.

Maffuid said after she injured herself on the front dismount, there was no other option but to overcome her fears.

“That was always a problem for me,” Maffuid said. “Last year, I broke my knee doing a front dismount on bars. It was either do the front one where I broke my knee, or do the back one.”

Maffuid said she never got injured on the back dismounts, but for some reason, she has always been scared of them since a young age.

Maffuid said head coach Rick Suddaby was helpful with taking her through the steps and drills for her to overcome her mental block.

Suddaby said the team spends an ample amount of time working on what to focus on and the use of keywords and positive affirmations. He said this gives the team time to get the situation under control.

The three gymnasts interviewed said they believed there are more mental blocks in club gymnastics — a more individualized sport — than there are in intercollegiate gymnastics.

Maffuid said the difference at the college is that she wanted to do the sport and contribute so badly for not only her, but also for her teammates.

“It’s all for the greater good of your team. I knew I would be helping my team, and that’s the motivation,” Maffuid said.

The three gymnasts interviewed said the negative competitiveness can make it easier to develop a mental block.

With many injuries in the sport of gymnastics, some may find it scary to do the same skill after recovering from an injury related to it.

However, Lyons is in the process of recovering from her recent ankle injury, which she received from her favorite event.

“Floor is my favorite event, and no matter how many times I get injured, it will not take away the amount of satisfaction I feel after landing a pass in competition,” Lyons said.

Even though a few of the gymnasts on the Bomber squad are unable to compete due to injury, the gymnasts said a positive mindset and attitude is mandatory in the gym, especially as far as recovery goes.

Cohen said in order to gain confidence back after an injury, one must start with the basics.

“Even something as simple as a straight jump after an injury is so important because it is something that you could not do when you were injured,” Cohen said.