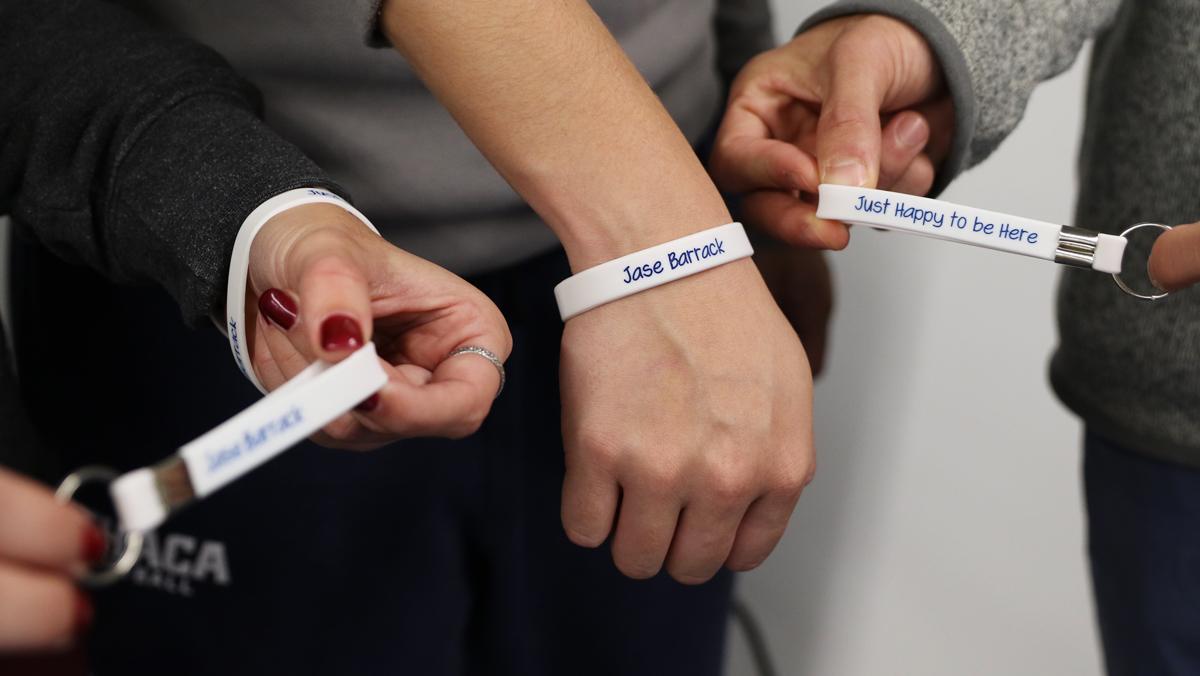 Junior softball player Erin Copozzi placed one small order of bracelets last May to give her teammates, friends and other sports teams a way to remember former student Jase Barrack. However, that single order has turned into a cause that has spread throughout the country.

Barrack was a member of the club soccer team and athletic training program at Ithaca College who unexpectedly died last spring. Senior soccer player Justinian Michaels, senior softball player Shannon Grage and Copozzi were all friends with Barrack. They currently spearhead Barrack’s Bracelets, which has sold approximately 250 bracelets and 50 keychains at sporting events and through social media and has raised over $1,500.

Michaels and Barrack were both recruited to play for the Bombers’ varsity soccer team and met for the first time at orientation. They were also in the athletic training program together, and Michaels said they became close friends who did almost everything together.

“Pretty much my whole life was around Jase and his life around me,” Michaels said. “Having those three years with him and every moment with him will always be special to me.”

Copozzi and Grage became close with Barrack when he served as a student athletic trainer for the softball team last spring. Both Copozzi and Grage sustained injuries and spent time in the training room with Barrack. Grage said Barrack helped her get through her torn bicep.

“I was really upset about it, but he always put a positive spin on it,” Grage said. “I was in so much pain, but he would joke around with me, get me to smile and see different sides of it.”

After Barrack’s passing, Copozzi said, she wanted to create something physical that she could look at to remind her that Barrack was there for her even if he could not be with her. She decided that bracelets were the best option.

When Copozzi designed the bracelet, she wanted to keep it simple so that she never has to take it off. She made them Bomber colors: a white band with blue lettering that reads Barrack’s name on one side and the phrase “Just happy to be here” on the other. Copozzi was looking for something to match Barrack’s optimism when one of her friends suggested the saying, which he often said to encourage the softball team.

“He would be there at 5 a.m. practice with two cups of coffee and say, ‘Just happy to be here,’” said Copozzi.

During the softball team’s postseason in May, she ordered a small amount for her teammates and sold them at games for $5. The bracelets quickly became popular as the club and varsity soccer teams requested them. Copozzi said she had to order approximately 500 bracelets by the end of the first week. She decided to team up with Michaels and Grage for extra help as demand grew.

“We wanted to spread awareness and get the bracelets further than just the varsity sports teams and his immediate family,” Michaels said. “Later on, we want to go into the Ithaca community and have everybody wearing them, not just the people who were touched by Jase.”

So far the organization’s profits have primarily been used to buy and ship more bracelets. The trio managing Barrack’s Bracelets said they hope to use its future funds to give back to the college in Barrack’s honor. Michaels said they hope to put a bench in front of the Hill Center Athletic Training Room where he used to sit before going to class.

He also said a portion of the money went into hanging a professionally framed soccer jersey that belonged to Barrack in the training center, and they have recently ordered a new gold-plated plaque to be placed underneath it. Barrack’s mother, Lisa, said she hopes to see the profits continue to benefit the college and its students.

“I hope they find a way to use this money towards making [the students] tighter and closer and feeling like they are a part of something big because Ithaca always supported Jase,” she said.

Barrack’s sister, Sarah, said her family was shocked to see how many people wanted the bracelets.

“It’s just so meaningful to know that all the people who love him will have this and wear it,” Sarah said. “Even people who didn’t know him but now know his story and they know who he was, wear them. It’s just amazing.”

Michaels said he has kept Lisa updated on when they were selling bracelets or ordering more. Sarah also keeps her family in the loop with the happenings on the Barrack’s Bracelets Instagram account.

“It’s craziness,” Lisa said. “I can’t believe that it just took off and people want to support his memory in that way. I was speechless.”