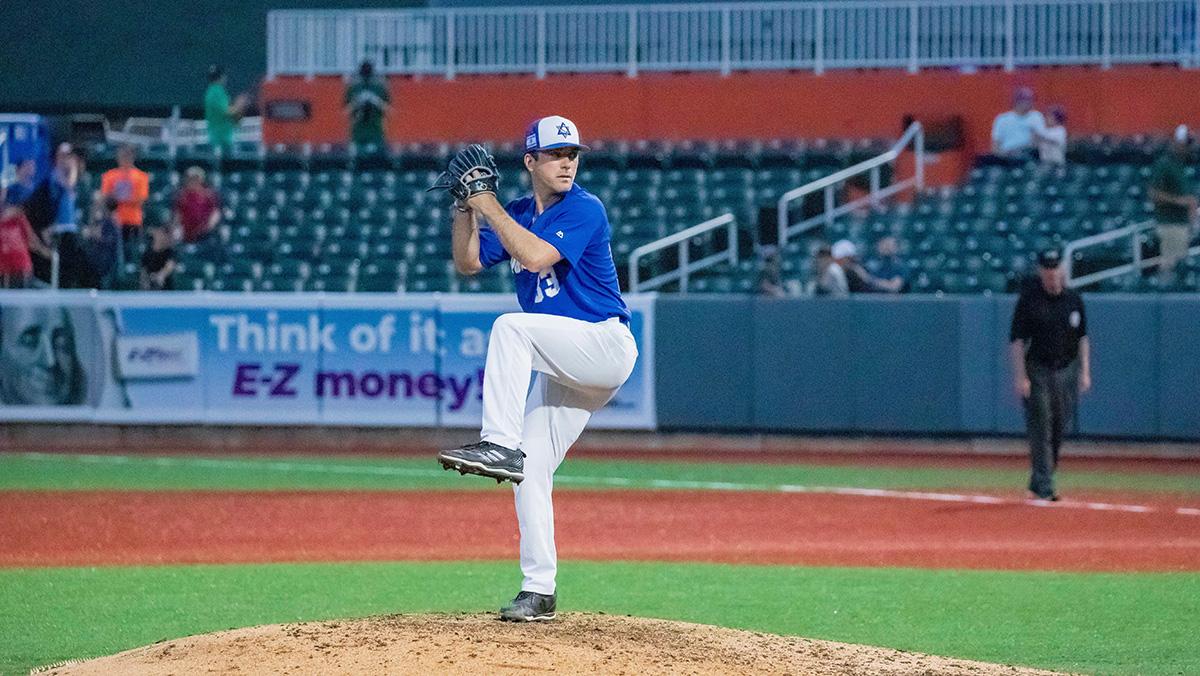 Courtesy of Jake Rosenberg
Jake Rosenberg '18 moved to Israel after graduating to help grow the sport's popularity in the country. He was a coach for Team Israel before being offered a roster spot in 2020.
By Connor Glunt — Sports Editor
Published: September 2, 2021

​​This summer, Jake Rosenberg ’18 was a part of history as he played in the 2020 Summer Olympics in Tokyo for Israel’s first Olympic baseball team.

Rosenberg started his collegiate career playing with Alvernia University in Reading, Pennsylvania, before transferring to Ithaca College for his junior year. The outfielder played baseball for the Bombers for two years before graduating. Rosenberg was one of 20 Americans who gained Israeli citizenship to gain eligibility for the Israeli Olympic team.

The Israel national baseball team spent the last two years playing in tournaments in order to qualify for the Olympic games. The team placed inside the top five in the 2019 European Baseball Championship, which gave it a spot in the 2020 Olympic qualifiers.

However, due to the COVID-19 pandemic, the members of the team had to return to their homes in 2020. Since then, there was a 10-day long minicamp that occurred in May 2021 that took place in Arizona. Around the beginning of July, the team played 10 exhibition games to conclude its preparation for the Olympic games.

However, prior to joining the team and moving to Israel, Rosenberg said he did not envision himself playing baseball for Team Israel.

Following his graduation, Rosenberg said he was not ready to settle down and work a nine-to-five job. His father, who works for the Jewish Federation in Philadelphia, Pennsylvania, shared his connections with people who could get him in touch with Tel Aviv baseball, a club in Israel.

“I never got to travel abroad because of sports, so I knew I wanted to travel a little bit,” Rosenberg said. “I am Jewish, I have a Jewish background and I’ve never been there before, so I figured that would be a pretty good spot to go. I thought I would go for a couple of months, but it turned into a multi-year long journey.”

Rosenberg said he had coaching positions lined up for youth baseball teams in Israel and was planning on only playing in a men’s league.

“I went out to Israel after college to just enjoy myself for a couple of months,” Rosenberg said. “While I was out there, I was told about this team they were trying to form for the Olympics. I felt like I would be stupid to turn that down, so I decided to get citizenship and go on the Olympic journey.”

Although Rosenberg did not plan to be involved as a player for Israel’s national team when he went to Israel, the news did not surprise his former Bombers teammate, Robby Buffis ’18.

Buffis was in the same year as Rosenberg and transferred from Alvernia with him. Buffis said whether it was practicing baseball or playing a casual game of pickup basketball, Rosenberg would never give anything less than his all.

“One thing you can never question about Jake is his work ethic,” Buffis said. “He puts in the time, he puts in the effort, and it’s always 100 percent. … Once he went to Israel, I think he had more time to focus on that and fine tune his game. He was a solid player at Alvernia, and he was a very gifted player at Ithaca, but you can see how he refined his game and took that next step to the next level for international competition.”

Shortly after arriving in Israel, members of the Israeli national team also took notice of Rosenberg and his dedication. Dean Pelman, who graduated from University of Florida in 2017 and pitched for the Gators, said he and Rosenberg had similar personalities and styles on and off the diamond.

The two met early into Rosenberg’s time in Israel and bonded over baseball, basketball and ping pong. Rosenberg did not speak any Hebrew, so he and Pelman grew close quickly. Pelman said Rosenberg’s involvement with Israel’s team was evidently beneficial at all levels he participated in.

“We got to coach [together] and that showed also how he was as a teammate and coach,” Pelman said. “He’s just a great role model for the kids. He does everything right and he’s a really hard worker.”

Now that the Olympics are over, Rosenberg is back home in Philadelphia. While Rosenberg and the team had their sights set on a medal, he said the experience was priceless.

“[It was] the best baseball experience I’ve ever had,” Rosenberg said. “Being able to represent your second home in Israel on a national stage is a dream come true. I made friends and memories to last a lifetime.”

Rosenberg said he is not in a rush to get back on the diamond and is taking some time off from the sport to recover and expand his horizons. However, he said he is grateful for the opportunities baseball and the Israeli team have presented him with, and is not ready to walk away from the sport entirely.

“I don’t think I’ll play [baseball] in the near future,” Rosenberg said. “I played baseball for 20 years straight, so I want to pick up a new hobby in the meantime. But you never know. I definitely want to go back to Israel soon. The main reason I went there was to help grow baseball, and with us going to the Olympics, I think that helped.”