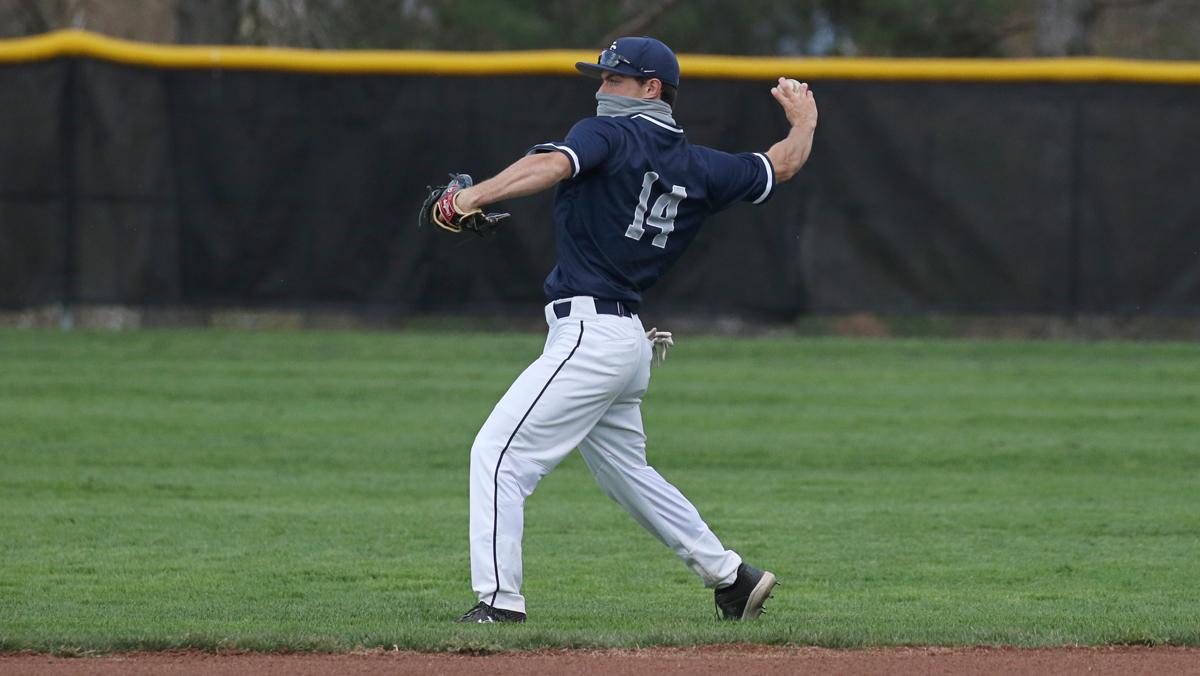 The Ithaca College baseball team has seen an immediate impact from its freshman class, as 13 players have made their collegiate debuts this season.

The team welcomed 19 new players in its freshman class this year. In the shortened 2020 season, only nine freshmen played. The club typically does not play many of its freshmen, as only two made varsity appearances in 2019, and three in 2018. Head coach David Valesente said he has relied heavily on his freshmen this season to make contributions both on the plate and on the mound and has been impressed by their efforts so far.

“We’ve been very happy with them,” Valesente said. “We’re still moving guys around and learning different things about them. … But, they’re bringing energy every day. They’re really excited to be out competing, and many of them have stepped up as being contributors right now at the varsity level.”

Several freshmen have become pivotal players for the Bombers this season, including second baseman Louis Fabbo and infielder Alex Barker-Hook, who have started 16 and 13 games respectively this year.

Senior shortstop and captain Jack Lynch said he has been pleased that the freshmen have been able to make an immediate impact on the field.

“[I’ve been] very impressed,” Lynch said. “I just remember when I was a freshman and I got thrown into a starting role. It’s very tough to step up and be that leader that we’re looking for. They’ve done everything from making plays on defense to having those big hits in the lineup.”

Fabbo is one of the players who has made impacts on both sides of the ball, as he has taken on the role of being the club’s leadoff hitter and second baseman. Through his first 16 games, Fabbo leads the team with a .381 batting average and 24 hits. Fabbo is also third on the team in RBIs with 14 behind seniors Garrett Callaghan and Lynch.

Fabbo capped off the Bombers’ 5–3 victory over Bard College in game one of the doubleheader on April 18, with a clutch two-run single to give the club the lead in the penultimate inning of play.

Lynch has been particularly happy with Fabbo’s performance on the diamond and presence in the locker room.

“Fabbo has really stepped up to the plate,” Lynch said. “He’s become a really solid leadoff hitter for us, getting on base, playing solid defense and really being a leader as well.”

Barker-Hook has also made his presence known in his debut campaign, logging a .243 batting average with seven RBIs and 10 walks. The designated hitter and first baseman has started in all but three of the club’s games.

The South Hill Squad has also seen the emergence of several pitchers who have made an impact on the club in high-stakes situations. Lynch has taken notice of the strong work ethic and competitiveness from this freshman pitching class.

“They just get the job done, and that’s what we’re looking for out of those guys,” Lynch said. “They continue to work off the field and put in the work in the weight room. They have great attitudes and they just want to win, and that’s really what we need out of them right now.”

Valesente said his staff has been surprised by freshmen relievers Nate Scott, Dom Trippi and Matteo Ragusa. At the start of the season, the three freshmen were not expected to receive much playing time this year, but Valesente said that after seeing them play, he could now see these pitchers transitioning into starting positions.

“They are emerging as guys that we’re going to look to in important situations,” Valesente said. “They’re learning every day and we’re excited about the future for them.”

Scott’s preparation has translated to solid performances on the mound, as the right-hander has notched a 2.16 ERA with 10 strikeouts in 8.1 innings of work this season. Scott said he is grateful to have the opportunity to pitch in high-leverage situations and improve his game during his first collegiate season.

“I really wasn’t for sure if I was going to get any innings this year,” Scott said. “I’ve been thrown into some pretty intense spots and performed in some, and then just really improving on some other ones. It’s definitely great to get out there and be a role player on this team this year.”

Trippi has also made an impact on the hill for the Bombers, striking out 12 batters in just 5.2 innings of work. He has held opponents scoreless in all but one of his appearances out of the bullpen in 2021. Trippi said his highlight of the season was when he notched his first collegiate save in the Bombers’ 7–6 victory against Alfred State College on March 25. The right-hander struck out three batters to preserve the club’s one-run lead and secure its fourth win of the season.

Trippi said he is grateful that the coaching staff has trusted him in key situations early in his collegiate career.

Valesente said he looks forward to what the young group has in store.

“We’re excited about all our first-year guys,” Valesente said. “They’re up here with us, and we’re calling on them at different times in a lot of different situations. The guys that are up with us now, we’re really excited about and we’re happy that they’re getting this experience for development and able to compete.”