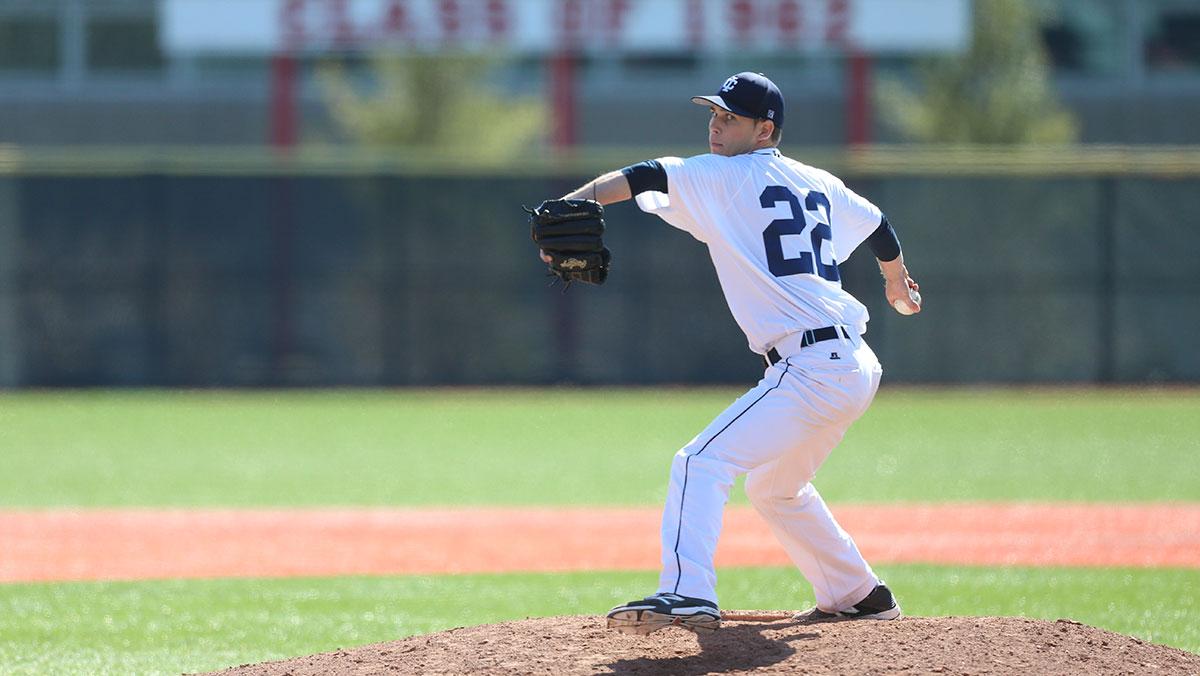 Coming off a first-place finish in the Empire 8 Conference last season, the baseball team will rely on veteran talent to lead it to another successful season in 2016. The Bombers finished last season 20–14 before claiming the championship victory and are currently ranked No. 37 in the 2016 Collegiate Baseball News Division III Preseason Poll.

With several key players returning, the team looks poised to have another strong season. Head coach George Valesente said the team will rely upon many of the returning upperclassmen, specifically senior pitcher John Prendergast, who is returning from a season-ending injury he suffered in the team’s first game of last season, and junior third baseman Trevor Thompson, who led the team in hitting last season.

Heading into the season, Valesente said the team is preparing in the same way it typically does.

“We’re working indoors, practicing five days a week,” Valesente said. “We were able to get out on the turf and on our field. We’re training ourselves physically and conditioning, strengthening to get ourselves in baseball-playing shape.”

However, junior second baseman Josh Savacool said the team is taking one different approach in its typical training regimen.

Savacool said despite beginning its in-season practices, the team has continued to lift and do yoga on a regular basis.

“Last year, we had a lot of problems with injuries, so to help make sure that doesn’t happen, we do yoga for injury prevention and to make sure we stay loose and we are stretched,” Savacool said.

With the return of Prendergast, who posted a 2.80 ERA in 64.1 innings in his junior season, to the pitching rotation, the team looks to be in good shape with several returning players locked into starting roles. Seniors Ryan Contegni, Brandon Diorio and Benji Parkes will take on key roles as they fill the middle of the rotation. After graduating Zach Dickstein ’15, a number of other pitchers could take a spot in the back end of the rotation.

As for the bullpen, Valesente said junior transfer Jean Germosen will take on the closer role after pitching for Tompkins Cortland Community College in 2015.

Along with a strong pitching staff, the team’s lineup figures to be potent. Thompson, who hit .385 with 21 RBI in 2015, and Savacool, who hit .325 with 19 RBI, were named to the Players to Watch list by Collegiate Baseball News, as was Prendergast, and will be featured near the top of the lineup.

“Hitting at the top of the lineup, it is even more crucial that I play well because the guys hitting behind me are fantastic hitters and can produce RBIs,” Savacool said.

Senior right fielder Cameron Oathout, who is one of the team’s co-captains, and sophomore center fielder Domenic Boresta will be relied upon in the outfield after strong showings in 2015.  Oathout, especially, shined on defense as he recorded 20 putouts without committing an error.  Boresta was one of the team’s better offensive players, hitting .304.

Along with Thompson and Savacool in the infield, Valesente said freshman William Little could win the starting shortstop job. His twin brother, Sam, is also a member of the team and is expected to make significant contributions to the Bombers this season.

“There are twin players here, Webb and Sam Little, and both are doing a great job,” Valesente said. “Webb could be our starting shortstop, possibly, and Sam could be in on a regular basis in the outfield.”

Another freshman Valesente said could be in line for significant playing time is Andrew Bailey.

“Bailey is a pitcher, and we have him working out at first base, so he may be a dual-position player,” Valesente said.

With some freshmen in line for big roles on the team, Oathout said he’s looking forward to taking on the role of a mentor.

“As a captain, I hope to teach the younger guys,” Oathout said. “I hope that I can instill a great work ethic which they can carry with them the rest of the time they are here and into their lives after IC.”

Savacool said the mix of veteran talent and freshmen will give the team an exciting dynamic throughout the season.

“The new talent, combined with the talent we had last year, is very exciting for the upperclassmen because we truly believe we can make it to a regional tournament and advance,” Savacool said.

But despite all of the talent, Savacool said the leadership of Valesente, who won his 1,000th career game with the Bombers last season, is the key factor to the team’s success.

“Coach Val is a winner, and with his support and guidance, our team as a collective believes we can win any game once we start playing. I have very high expectations for our team this season,” Savacool said.

With the vast potential throughout the roster, many of the players have high hopes for the season.