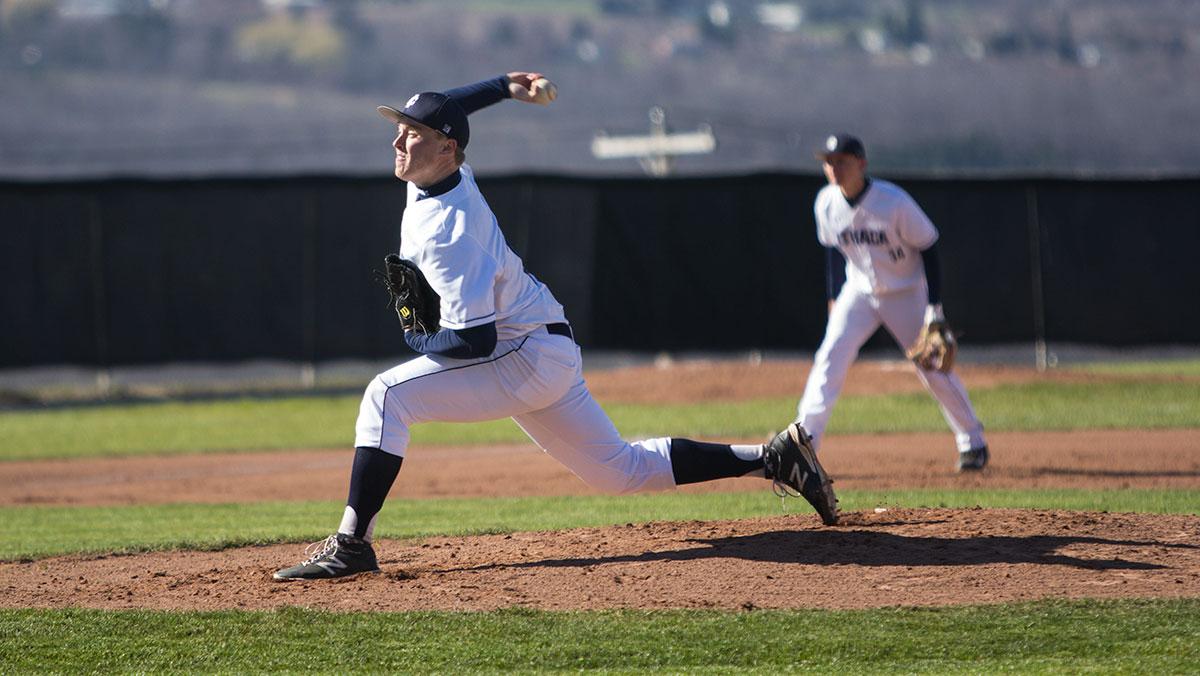 In its 2016 home opener, the Ithaca College baseball team fell to No. 13 SUNY Oswego on March 29 in an 8–2 decision at Freeman Field.

On a cool, crisp afternoon, the Lakers put up five runs in the seventh inning to overcome a gritty battle between the local rivals and take home the win.

After a walk and a failed pickoff attempt to sophomore Robert Donnelly in the first inning, junior Eric Hamilton plated Donnelly to put the Lakers up 1–0 early.

Except for a few disperse innings, it was a back-and-forth pitching matchup for both squads with plenty of zeros put up on the scoreboard.

In the third inning, the Bombers had the opportunity to take a commanding lead with the bases loaded and only one out. After a single by senior utility man Zach Cole and a botched groundout, it put runners on first and second base for junior Ryan Dougherty. Dougherty snuck one into left field to fill the bases for the Bombers. A strikeout by junior Trevor Thompson and a groundout by freshman Sam Little ended the threat.

Sophomore Nathan Boughton pitched well for the Lakers, striking out four over 4.1 innings and scattering two hits to receive the no-decision.

The South Hill squad finally plated a run in the bottom of the fifth after a two-out double by third baseman Thompson to knot the game at one apiece.

Two innings later, Oswego erupted with three straight singles and an error by Thompson, the Bombers’ third on the day, that led to a 4–1 lead for the Lakers. Until this point, sophomore Tyler Hill lasted 6.1 strong innings, striking out four batters, but received the loss.

Freshman Andrew Bailey came in for relief to attempt to stop the bleeding, but after a double-steal, a passed ball and a single, the Lakers plated two more runs. In the eighth, Oswego added another two runs to make the score 8–1 on a two-out sacrifice fly and a double.

In the bottom of the ninth, the Bombers refused to go down easy after a leadoff walk by freshman pinch hitter Adam Gallagher. A passed ball and a throwing error led to the Blue and Gold tacking on a run before sophomore Jonathan Ripic flied out to end the game.

The Oswego Lakers improved to 14–3 on the season as the Blue and Gold dropped to 6–8. The Bombers have a chance to even up the homestand with a 4 p.m. game March 30 against SUNY Oneonta at Freeman Field.