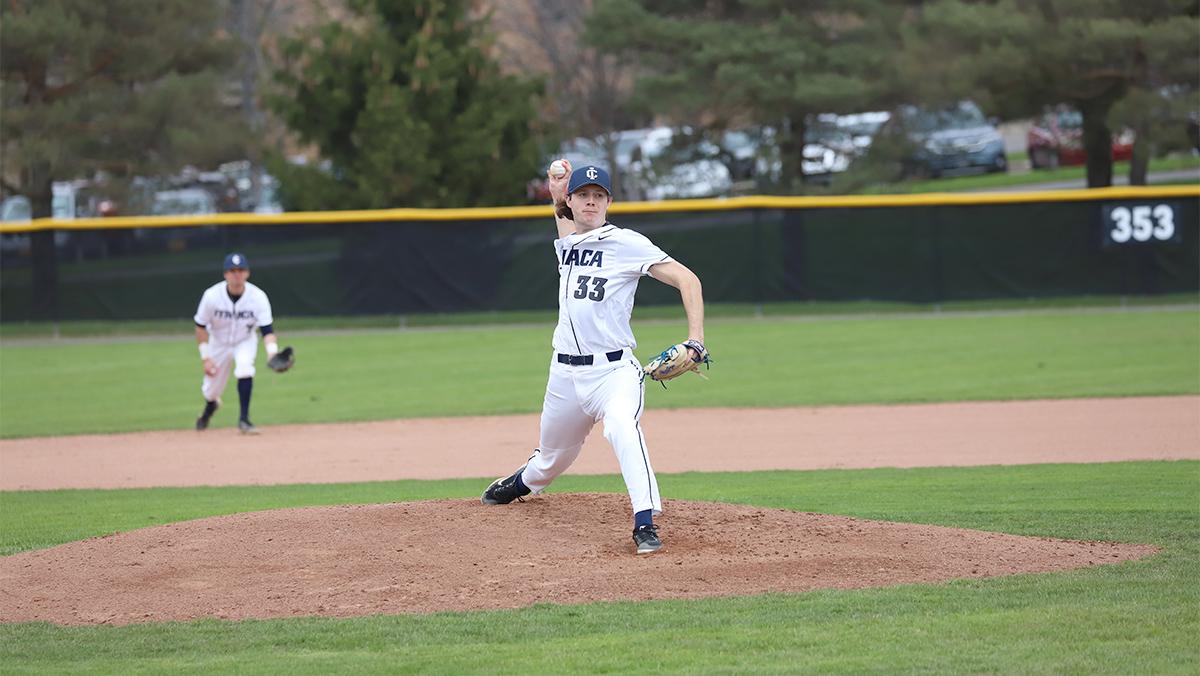 The Ithaca College baseball team defeated the No. 22 ranked University of Rochester Yellow Jackets 5–2 in game one of a three game series at Freeman Field on April 23. The victory improves the club’s record to 21–8 overall and 9–3 in conference play.

The South Hill squad rode the arm of senior starting pitcher Kyle Lambert, who allowed just two runs on five hits while striking out 10 batters in eight innings of work. At the plate, the Bombers got 10 hits in total, with senior first baseman Buzz Shirley hitting his fourth home run of the season.

Head coach David Valesente said that the team’s offensive production helped give the Bombers the momentum to defeat the Yellow Jackets.

“It felt great,” Valesente said. “We had some big hits in big situations. Buzz Shirley with a big home run that set the tone. There were a couple of base hits that really helped us get on the board.”

The scoring started off fast, as Rochester hit a lead off home run down the left field line to take an early 1–0 lead in the first inning. After the home run, Lambert got two strikeouts to limit the damage by the Yellow Jackets. Shirley answered back in the bottom half of the inning with a solo home run to left field of his own, making the score 1–1.

After a scoreless second by both teams, Rochester regained the lead on a sacrifice fly to left field in the third inning, which gave the Yellow Jackets a 2–1 lead.

In the bottom of the fourth inning, the South Hill squad loaded the bases with two outs set up by singles by sophomore infielder Louis Fabbo and freshman shortstop Connor Pedersen, and a walk from junior third baseman Matt Fabian. The Bombers were able to even the score at 2–2 following junior catcher Gil Merod getting hit by a pitch.

The Bombers would take their first lead of the game in the fifth inning, as freshman second baseman Riley Brawdy followed hitting a ground-rule double to right field by moving up two bases on wild pitches to give the Bombers a 3–2 lead. The South Hill squad would add another run in the inning courtesy of Shirley scoring from third on a wild pitch after reaching base on a walk.

The Bombers added to its lead in the eighth inning, as Merod scored after freshman center fielder Collin Feeney hit a double to left field, which made the score 5–2 in favor of the Bombers.

After Lambert pitched eight innings for the college, junior pitcher Garrett Bell finished the game off with three strikeouts in the ninth to solidify the Bombers win.

Lambert said that his focus and preparation allowed for him to have a good game on the mound against the Yellow Jackets.

“I felt like it went great,” Lambert said. “After giving up the home run to start, I had to resettle and I was able to focus on getting pitches over the plate, which helped me to succeed a lot today.”

As the Bombers prepare for a Sunday doubleheader, Valesente said the goal for the team is to repeat its success on the road in those two games.

“We’re going to look to do the same exact thing we did today,” Valesente said. “The way our offense performed was what we needed to do against this team today, and we will try to continue that tomorrow.”

The Bombers will return to South Hill to take No. 20 Oswego State at 4 p.m. April 27 at Freeman Field.