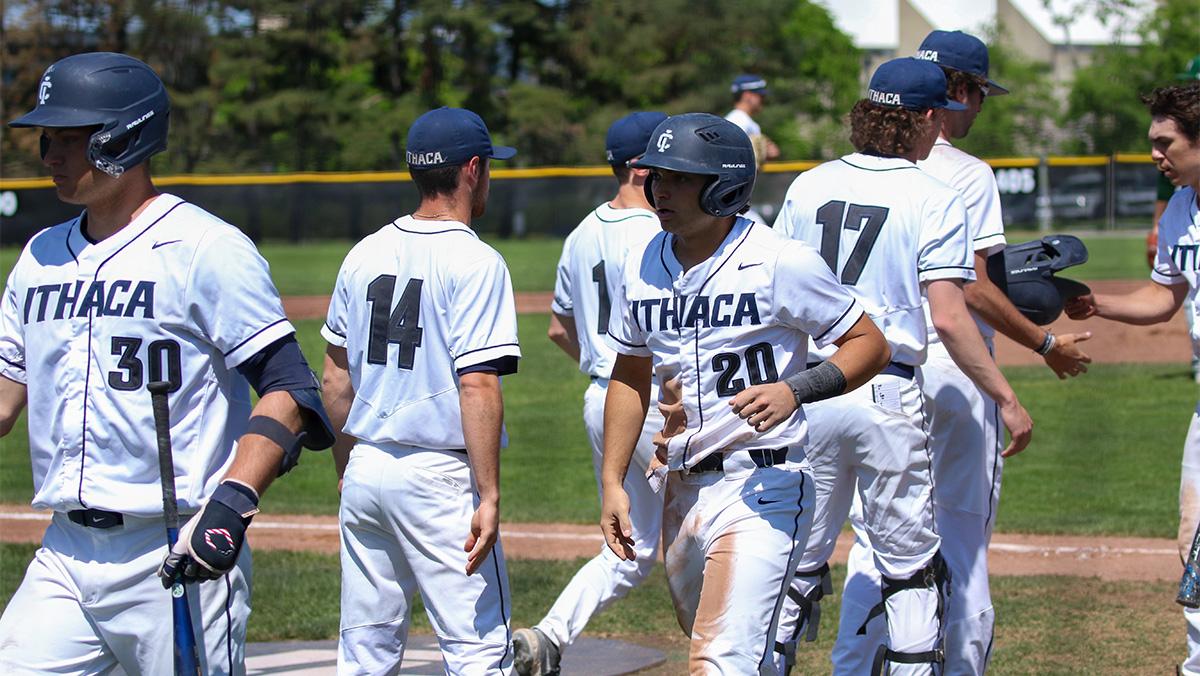 Freshman pitcher Colin Leyner earned the start and the win on the mound for Ithaca College. Leyner was dominant through the first three innings, allowing just one baserunner on an error by sophomore third baseman Ethan Rothstein in the third inning.

The Bomber offense looked strong from the first frame. After junior infielder Mike Nauta grounded out to the shortstop to start the game, sophomore infielder Louis Fabbo would single and then be scored by the next batter, senior infielder Buzz Shirley, who roped a double to left-center to give the college a 1–0 lead.

The second inning was the only inning in the game where the South Hill squad did not score, despite the team loading the bases. The South Hill squad would tack on a second run in the third inning, but the Yellowjackets took one back in the top of the fourth to make it 2–1 after Leyner made it out of a bases-loaded jam with no outs.

The fourth frame started quietly with a strikeout by Rothstein. Freshman infielder Riley Brawdy hit a double, but Nauta popped out to the shortstop for the second out. But with two down in the inning, the floodgates opened, and the Bombers ended the inning leading 12–1.

After a pitching change, walks by junior catcher Gil Merod and Rothstein scored another run. Rochester nearly got out of the inning after Brawdy hit a ground ball straight to the second baseman, but he botched the toss to get the force out at second, allowing Fabian to score and leaving the bases loaded. The Bombers tacked on two more runs on consecutive hit batters, making the score 10–1.

On his second at bat of the inning, Shirley earned his third and fourth RBI of the inning with a bloop single that scored Brawdy and Nauta before Cutaia grounded out to first to end the inning at 12–1 Bombers.

The Bombers scored again in the fifth inning, but Rochester earned two of its own in the top of the sixth to make it 13–3. Despite leading by 10, the Bombers did not take their foot off the gas, scoring three more in the seventh and two in the eighth alongside two more Rochester runs to keep the final score at 18–5.

The final out of the game was anticlimactic for the Yellowjackets. Rochester seemed to be gaining some steam to make the score respectable, loading the bases with one out. But a deep line drive to right field caught by Fabian confused the baserunner at first, who could not make it back to the bag in time and was doubled up to end the game.

Shirley, who ended the game 3-for-4 with two doubles and five RBIs, was named the Most Outstanding Player of the tournament at the conclusion of the game by a representative from the Liberty League. For a player that has been with the team through ups and downs over the past several seasons, he said it felt great to be recognized after such a special season.

“It’s awesome, obviously,” Shirley said. “This is what I worked basically my whole career for and, you know, the extra work and my good work ethic has paid dividends.”

Shirley said he could not be more excited to be a part of this team that not only won the conference but now gets to go to the NCAA Division III Tournament.

“It’s obviously great to come out on top with this select group of guys who I like to call my family,” Shirley said. “We kept our foot on the gas, we just put the nail in the coffin and [Rochester] never recovered … And now we get to go dancing, baby! We get to go dancing!”

The Division III Tournament selection will happen May 16, where the college will find out who it plays. The Bombers will be looking to earn their first national title in baseball since 1988 when tournament play begins May 20.