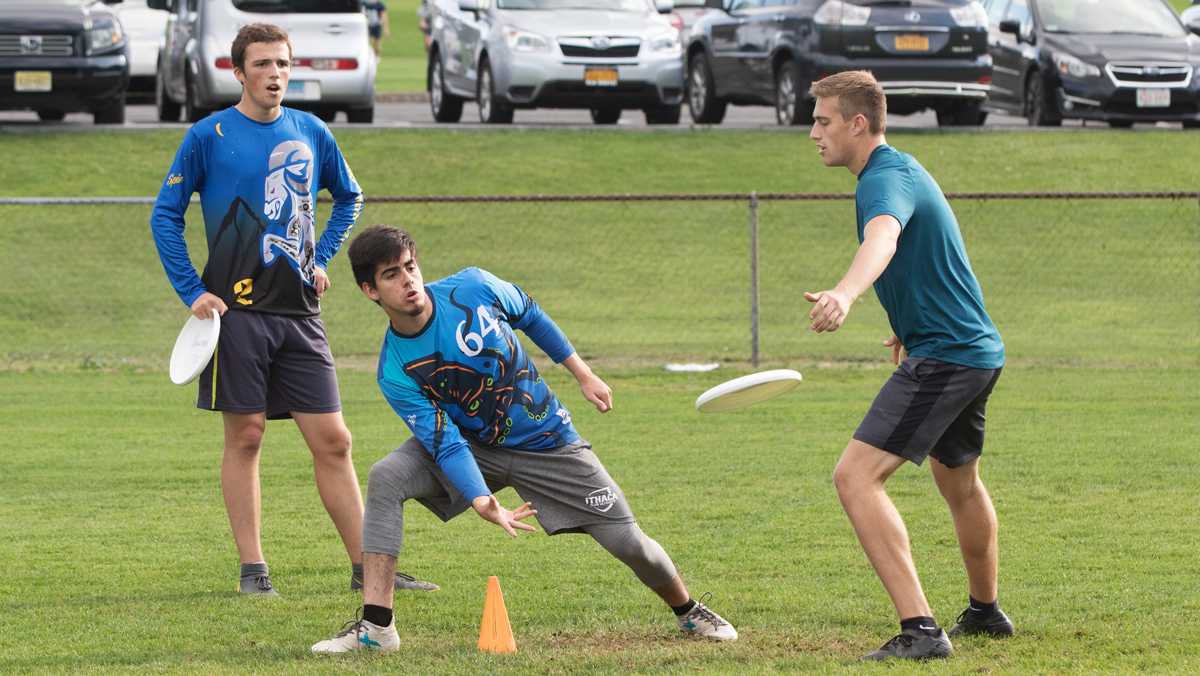 In balmy fall temperatures or harsh Ithaca winters, the men and women of the Ithaca College Ultimate Frisbee teams can be found outside or in the Athletics & Events Center tossing frisbees and learning plays in preparation for tournaments.

Ultimate Frisbee is a growing sport all over the world. It was originated in 1968 by a group of students at Columbia High School in New Jersey and is now played in over 80 countries by an estimated 7 million men and women.

Ultimate Frisbee is a fast–paced sport with features similar to soccer and football. There are seven players from each team on the field at a time, and they attempt to cross into an end zone without letting the frisbee touch the ground or running more than three steps with it.

The men’s and women’s teams interact quite a bit. They share practice times on Fridays, travel to away tournaments together and stay in the same hotels. Junior captain Jack Hogan said they also cheer each other on as often as possible.

Both the women’s and men’s teams accept any student who joins the team during the fall semester regardless of experience level. They spend the fall teaching newcomers the game so they can be competitive in the larger spring tournaments.

The men’s Ultimate Frisbee team named Nawshus Ultimate was founded at the college in 1994. Last year, the team competed in 12 tournaments and traveled as far as Myrtle Beach, South Carolina. It finished second in the sectionals competition and seventh at Metro East DIII College Men’s Regionals.

Senior team captain Andrew Polcari said he is expecting big things from the team this year.

“This season, specifically in the fall, we want to show the rookies what Ultimate is all about,” Polcari said. “In the spring, we’re pushing for nationals. There are smaller goals in between like getting into tournaments, winning tournaments, placing well in tournaments, but nationals is the end goal.”

Only one team from each of the 16 collegiate Ultimate Frisbee regions qualifies to compete at the Division III Men’s National Championships. This is something that the team has never accomplished before, but Hogan said he believes it can get there this year.

“What makes this year different for us is that we are returning a lot of really great players who have only improved since the last time we saw them play,” Hogan said. “Add that to our awesome rookie class who grow better every day, and there’s a lot of optimism for the present and the future.

Hogan has been a part of the program since his freshman year at the college. He said he initially joined the team to meet friends.

“When I first got to IC, I really didn’t want to be here and fully had my sights on transferring,” said Hogan. “I joined Ultimate, and a few weeks into school all those worries went away. I found my place and a joy in doing things here.”

Polcari is one of four captains for the men’s team and has been a part of the squad for three years. He started playing Ultimate Frisbee in his sophomore year of high school and said that he enjoyed the atmosphere of the game.

“Within the Ultimate community, there is a huge push to stay spirited and always have fun on the field no matter how the game may be going,” Polcari said.

Hogan said the team has bonded so well together that he can anticipate his teammates’ actions during a game.

“We just know what the team’s tendencies are going to be,” Hogan said. “I know a certain guy is going to be looking for something, and I just have to be ready for it.”

The women’s team, known as Kweezy, was founded in 2003. In 2018, the squad won games over SUNY Geneseo, Cornell University, University at Buffalo and University of Rochester. It is also a two-time winner of the “Best Spirit” award at James Madison University’s Hellfish Bonanza.

The squad practices three times a week and competes in three to four tournaments every semester.

Senior captain Brigid Long has been a part of the club for all four of her years at the college. However, she has competed in Ultimate Frisbee for seven years because she started when she was a sophomore in high school.

“A lot of the time when you are playing, you are chatting while you’re playing with the other team,” Long said. “You get to know friends from other places too, so it’s really fun.”

Junior captain Yeshim Kayim-Yanko has been a part of Kweezy for three years and also competed in Ultimate Frisbee during high school. She said she grew to love the sport and its unique rules, like the games being played without referees.

“All the fouls and penalties are called by the teams that are playing,” Kayim-Yanko said. “You just want to be a good sport on the field, and if someone calls a foul, you can either accept it or debate it, but it is done in a friendly, good sportsmanship kind of way.”

Kayim-Yanko said Ultimate Frisbee has had a huge impact on her college experience. She said she has gained a great group of friends and is currently living off campus with five of her teammates. Long said she has also become extremely close with her teammates over her four years on the squad.

“We’re more than a club for a lot of people,” Long said. “It’s much more like we are a family.”