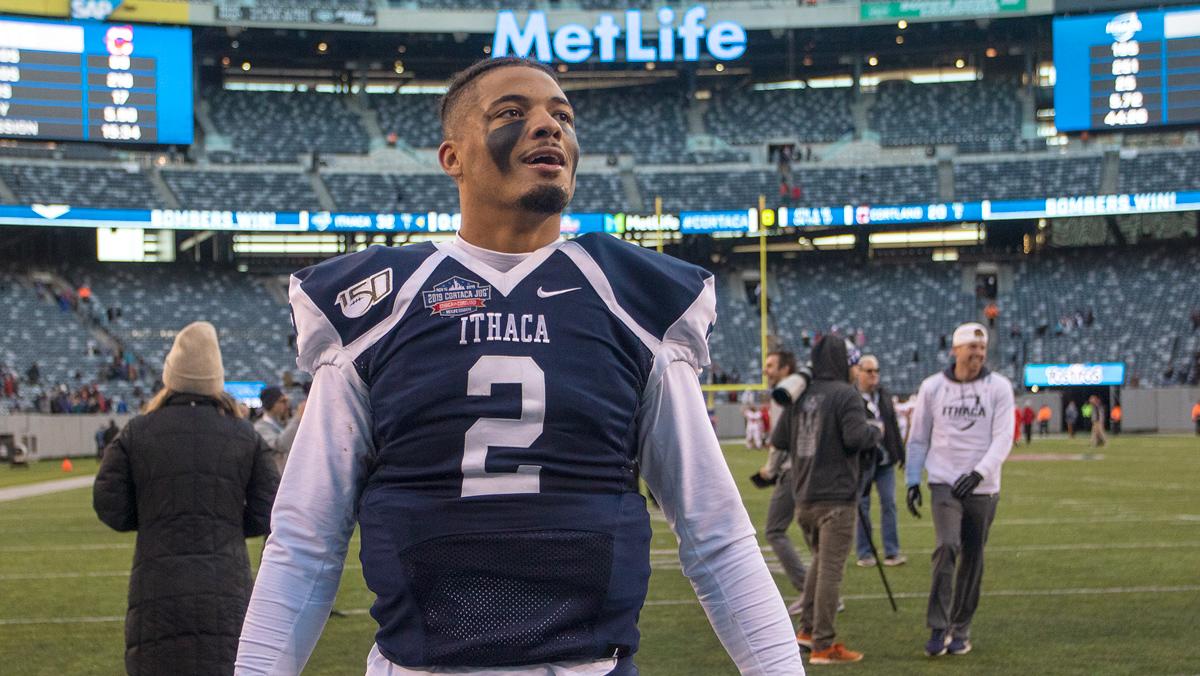 After playing at MetLife Stadium in the 2019 Cortaca Jug, Will Gladney, former Ithaca College football wide receiver, is working toward playing in stadiums every Sunday for the NFL.

Gladney is currently training in preparation for the upcoming NFL Draft on April 23. The former Bomber is working out at Grossetti Performance in New Castle, Pennsylvania. Grossetti Performance takes on small groups of athletes every year who are looking to enter the NFL Draft and puts them through a rigorous three-month training program to get them mentally and physically ready to play professional football. Five of the six position coaches who work with the trainees have played in the NFL, and owner Terry Grossetti has trained over 100 professional athletes.

Gladney has one semester left in order to graduate from the college but, with his current opportunity of making it to the NFL, he has decided to temporarily put his degree on the back burner.

“I decided after the season [that I would accept the invitation to Grossetti Performance],” Gladney said. “I asked my parents if it was the right decision. Then I asked my coaches, and they said that this opportunity is a once in a lifetime, so I decided during winter break that I was going to do this.”

Gladney played four seasons for the Bombers and registered 3,574 total receiving yards and 38 touchdowns on 258 receptions. He became a full-time starter at the beginning of his sophomore season and was named to the Liberty League First-Team All-Conference roster three times, the D3football East Region First Team twice along with being awarded Liberty League Offensive Player of the Year as a junior. Gladney also is the program leader in receiving yards, receptions and touchdowns.

After an accolade-filled career at the Division III level, Gladney caught the attention of NFL scouts. He was contacted by Terry Grossetti, owner and director of Grossetti Performance, after numerous scouts told Grossetti about Gladney and how they were interested in him but wanted him to receive some training. Following some research of former prospects who trained with Grossetti, Gladney made the decision to postpone his final semester of college.

“I’m definitely going to finish,” Gladney said. “I promised myself and people that have helped me get this far that I would finish and, just for me personally, I’m going to finish college.”

Avery Moss, a linebacker for the Miami Dolphins, and Derek Rivers, a defensive end for the New England Patriots, trained at Grossetti Performance. Former NFL linebacker Lawrence Timmons, who also trained there, was a 2008 Super Bowl champion with the Pittsburgh Steelers and was selected to the Pro Bowl in 2014.

Gladney’s close friends said they are not surprised this chance presented itself. Ithaca College junior wide receiver Andrew Vito, who is very close with Gladney, said he knows the type of athlete and person Gladney is and how much work he has put in to get to this point.

“I’ve been around high-level talent, and they don’t work like Will,” Vito said. “A lot of guys think it’s going to be handed to them. He hasn’t been handed anything in his life. From where he’s come from, from being in foster homes, to being adopted, to being a Division III football player, not even supposed to be here, to now pursuing his NFL dream. Everything he’s done, he’s overcome something.”

As he bounced around from different cities and school districts throughout his childhood, Gladney said that football was always there to help him take his mind off what was going on. Gladney was adopted during his sophomore year of high school by the director of a group home he stayed at. Now that he is at Grossetti Performance, Gladney said he is committed to becoming bigger, faster and stronger than he ever has been before.

It only took Gladney and Vito six games to top 1,000 receiving yards this season, and together they totaled 2,235 receiving yards at the end of the season. The duo combined had the fifth–most receiving yards in the nation of any two receivers and was one of six duos to top 2,000 receiving yards. From being around Gladney so much over the last three years, Vito said he was able to learn not only how to be a better football player but also a better person outside the game.

“I’ve learned a lot of stuff from Will,” Vito said. “It’s not even just on the field. It’s off the field, too. I’ve become a better person being around him. He’s given me confidence. Being around him just gives you that sense of confidence because you know he’s going to do his job. Sometimes other people don’t do their job, but you know he’s always going to do that. He’s always going to give you his best.”

At a place like Grossetti Performance where football players from across the country go to train, there are no easy days. Gladney said that he gives 100% for every drill every day but that being able to train with players from Power 5 conferences from Division I football forces him to approach every day with more intensity and confidence.

“An athlete is an athlete, no matter where he plays,” Gladney said. “It definitely gives me an edge. I have an edge in my workouts when it comes to those kinds of athletes because of where I come from, but I feel like I’ve played with an edge from the beginning.”

Performance trainer Kyle Piper said the edge Gladney trains with is apparent to his trainers. Piper, who has been working at Grossetti Performance since 2017, has noticed all the little things Gladney does during workouts that are rare to see in prospects. Piper said Gladney has impressed him and other trainers by being the first guy in the building and last one out the door.

“Number one, he’s always one of the guys who wants to be first in line,” Piper said. “I think that says a lot about a kid’s character and their motivation. You can see it any time he’s in a group with kids that played in Power 5 conferences. … Any time you’re a Division III kid coming in and working with that caliber athlete, in the back of your mind you’re like, ‘I can be there too. I’m just as good as this guy.’”

Piper is certified as a performance enhancement specialist by the National Academy of Sports Medicine and as a speed specialist through the National Association of Speed and Explosion, so, although he’s worked closely with Gladney since early January, it is not his area of expertise to critique his work on the football field. However, when Piper has had the opportunity to watch Gladney perform in drills, Gladney has shown him how good of a receiver he is.

With a little bit over a month left in the program, Gladney said he is confident his training at Grossetti Performance will enhance his visibility for his pro day, which is an individual workout with NFL scouts before the draft. He does not have an exact date or location yet for the test, as he and his agent are still working that out. Gladney said that when scouts watch him test during his pro day, he knows they’re going to notice his talent and heart.

“I catch everything that’s thrown my way. I’m a physical player, and I love football,” Gladney said.

Wide receiver stands out during his sophomore campaign