Bombers advance to championship game with win over Stevens 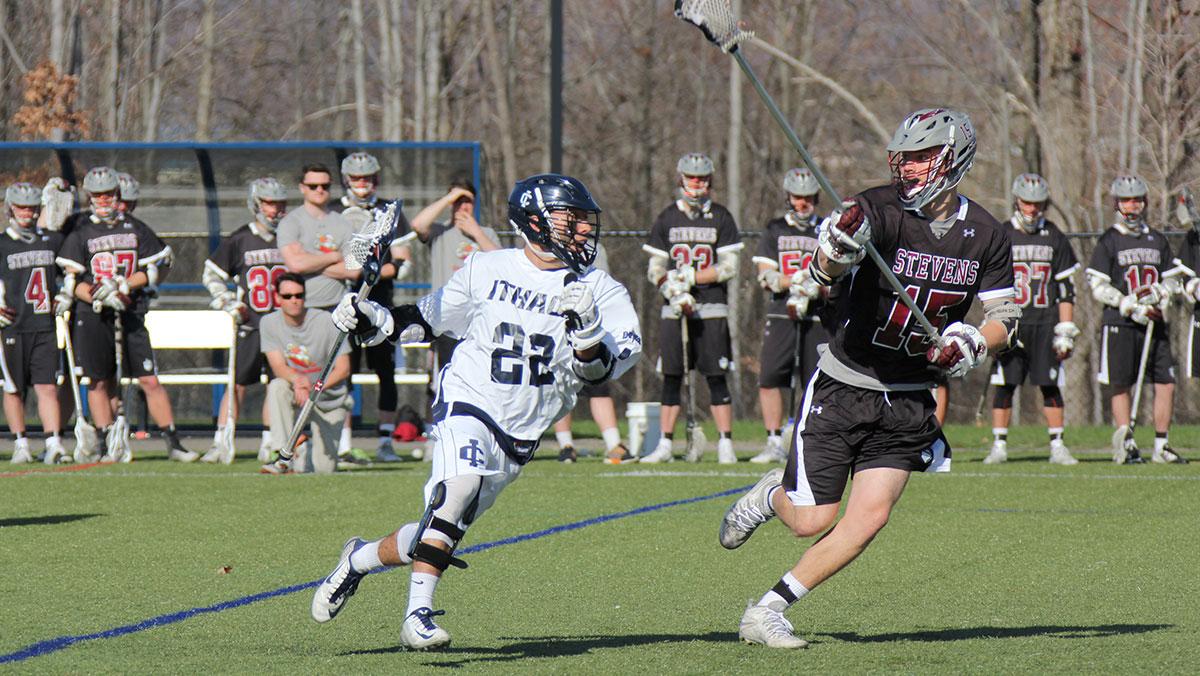 John Januszkiewicz, the reigning Empire 8 Rookie of the Year, made a name for himself last season on the men’s lacrosse team. During the regular season, the sophomore attacker scored 34 goals — second-most on the team — but never embraced the go-to-guy role for the Bombers. However, in the Empire 8 semifinal game against Stevens Institute of Technology on April 29, Januszkiewicz took over Higgins Stadium, scoring four goals to lead the South Hill squad to an 11–9 win over the Ducks.

Long said he looks to Januszkiewicz in close-game situations because he succeeds under pressure.

“He’s a gamer,” he said. “He’s a little banged up physically right now, but he brings it on game day, and he’s a kid you want on your side, and you want the ball in his stick when things are under the pressure zone.”

After a defensive battle for most of the game, the reigning Empire 8 champions are headed back to the championship game for the fourth straight season.

Seven different Bombers scored in the game, including senior attacker James Manilla, who had two goals. Sophomore midfielder Justin Bird and freshmen midfielder Stephen Morrell and attacker Kaelan Fitzpatrick all had one goal apiece for the South Hill squad.

The Blue and Gold outshot the Ducks 40–32, and junior goalkeeper Scott Sidnam made six saves overall to give them the win.

Januszkiewicz said it is difficult for Stevens’ defense to cover the Bombers’ offense.

“Our offense was really clicking,” he said. “If it’s not me scoring, it’s [Jack] Shumway, James or one of us. We work really well together.”

It was a sloppy beginning to the game for both squads, and after the conclusion of the first quarter, the game was tied 2–2. Freshman attacker Jake Cotton and sophomore attacker Shumway both tallied their only goals in a back-and-forth contest at the start.

In an eventful second quarter, a total of eight goals were scored between both teams. At the 3:31 mark of the game, the Bombers went a man-up in the game after a penalty to sophomore defender Jake Krantz for the Ducks.

Heading into halftime, the Bombers scored two goals within three minutes of each other to tie up the match at 6–6, led by Manilla and Januszkiewicz.

The third quarter was highlighted by another goal by Januszkiewicz before Stevens responded with a goal by freshman midfielder John Boutureira. Two goals right before the end of the quarter put the Bombers up 9–7 for their largest lead of the game, and the team never looked back.

Head coach Jeff Long said he was pleased with the result of the match, but the team must play better against Nazareth College.

“Stevens came in with a higher energy level and a little more purpose because of what we did on Saturday,” Long said. “We did show composure at the right times. I don’t think we were real sharp, but I thought it was an OK effort, and we are going to have to play a lot better on Saturday.”

The Blue and Gold will take on Nazareth on May 2, as they will hit the road once again to face off against the Golden Flyers. Nazareth beat St. John Fisher College 13–4 in the other semifinal game.

Ithaca lost to Nazareth by a score of 9–6 back on April 11 in Rochester, New York, so the Bombers will look for revenge against the Golden Flyers with the Empire 8 championship on the line.

Junior defender Eli Gobrecht said he is excited for the rematch with the Golden Flyers.

“We are just happy with the result,” Gobrecht said. “We just wanted to get back to Rochester and get another crack at Nazareth.”

However, Gobrecht said the Bombers will have to keep possession of the ball more on offense in order to have a shot at beating Nazareth.

“We just have to posses the ball better,” he said. “Last time we were up there, they had the ball three quarters of the game, and it’s pretty hard to win like that. We didn’t get many chances in the second half, so if we can keep the possession and even force a few more turnovers, I think we will have a pretty good shot at it.”